Men 'Could All End Up In Final' 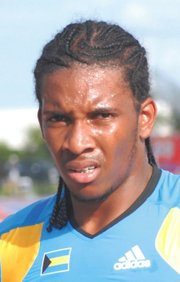 LONDON, England — David Charlton, like many of the athletes, is making his debut as a coach of Team Bahamas at the Olympic Games.

The former outstanding 400 metre hurdler from Grand Bahama has been working diligently with the men’s squad. And based on what he’s seen in practice, he’s confident that the Bahamas will be very proud of the performances here.

“The men are all looking good,” Charlton said. “They have been working out very hard and they look good in their practice sessions.”

Although they were hampered a little bit by the rain yesterday, Charlton said the men worked out in the indoor facilities and got a chance to work out some of the aches and pains.

“The 400 guys are looking fantastic. I’ve worked with Demetrius Pinder and Ramon Miller and I was really impressed with what I saw from there,” Charlton said. “Chris Brown has been working out with his coach (Innocent Egbunike from Africa) and since the nationals, he turned in a 44-plus performance, so we know that he’s in good shape and ready to run. I think the Bahamian people will be very proud of these guys. I expect that they could all end up in the final.”

The heats for the Men’s 400m is scheduled for Saturday. The semifinal will be ran on Sunday and the final will take place on Monday.

Charlton said the good thing about the schedule is the fact that the heats of the Men’s 4 x 400 Relay will not take place until Thursday. With at least two full days to rest, Charlton said they will have a chance to use all three competitors in the heats, if necessary. The final will be moved up to Friday and replaced with the men’s 4 x 100 final that will complete the athletic competition on Saturday, August 11.

“The only problem we have is with Michael Mathieu,” Charlton said, “We would like to have him available for the relay as well, but it all depends on how well he does in the 200.”

Mathieu will compete in the first round of the men’s 200 on Tuesday. The semifinal is on Wednesday and the final is on Thursday. If he advances to the final, Mathieu will more than likely have to skip the heats.

Not to worry, there are six other competitors lined up to make up the relay pool. They include Pinder, Miller and Brown as well as Andrae Williams, Avard Moncur and Wesley Neymour.

“We will have a run off tomorrow (today) to give us an indication of who will be included in the relay pool,” Charlton said. “We have a very good selection to work with, so we just have to wait and see what happens after the run off.”

The team of Andretti Bain, Mathieu, Williams and Brown clinched the silver medal at the 2008 Olympics in Beijing, China. Both Miller and Moncur were the alternates. It’s interesting that the same squad is back with the exception of Bain, who has been replaced by Neymour. Charlton said they have an idea of who they are more than likely to use on the team, but they want to give all of the athletes the opportunity to make it.

In addition to the runners, Charlton said assistant coach Ronald Cartwright has said that he’s been pleased with what he saw from long jumper Raymond Higgs, high jumpers Donald Thomas and Trevor Barry and triple jumper Leevan ‘Superman’ Sands. So he’s confident that the jumpers will also go out and perform at a very high standard.

Sands, by the way, is the reigning bronze medallist from Beijing. He is returning to the village after spending a day getting some additional treatment for his leg in Germany.