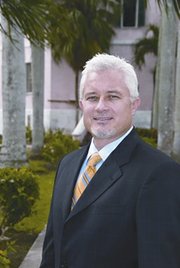 Oceania Heights’ principals were yesterday challenged to produce one owner who was happy with the development, an attorney telling Tribune Business: “The way the project was structured and sold should not be allowed in the Bahamas.”

Andrew O’Brien, a partner in the Glinton, Sweeting and O’Brien law firm, disputed assertions from the developers’ attorney, Fred Smith QC, that it was just a small minority of ‘disgruntled homeowners’ creating problems, disclosing that he had been contacted by buyers representing 30 per cent of lots sold.

While agreeing with Mr Smith that a negotiated settlement would be best for the strife-torn Exuma development, Mr O’Brien said his clients were “sceptical” about the developers “desire and/or ability” to resolve the key issues.

And, noting Mr Smith’s assertion that Oceania Heights had sold more than 100 lots, Mr O’Brien questioned why so few conveyances recording these sales had been lodged with the Registry of Records.

Suggesting that the best solution would be for every Oceania Heights homeowner to “get their money back” and the project start again, the attorney said buyers had only turned to him after being “totally ignored” over their concerns by the developers.

Disputing Mr Smith’s position that neither he, nor his law firm, had given the developers with a list of clients they represented, Mtr O’Brien told Tribune Business: “I provided Fred Smith with a list of complaints in October 2011, and I never had any substantial reply to that.

“They say a small number of homeowners are disgruntled. At the time of that letter, we had been in contact with 14 separate owners who had some kind of interest in approximately 34 lots. I say approximately, because the way they shifted sands, we haven’t identified whether they swapped out lots or not.”

And he added: “I would challenge them to provide own owner, besides themselves, whose satisfied with the subdivision.

“There are title questions that have not been answered, and it’s fair to say that the development was structured and sold in a way that should not be allowed in the Bahamas.”

Tribune Business revealed earlier this year that complaints by some homeowners at Oceania Heights had prompted the Canadian government to issue an investment advisory on Bahamian real estate transactions, warning that any disputes “could be prolonged and costly to resolve”.

Among the complaints advanced by several Oceania Heights homeowners are difficulties with obtaining title documents to their properties, and that Stamp Duty payments due to the Treasury on lot sales - and which they made to Mr Thompson for passing on - have not been made.

Other alleged grievances are that Mr Thompson, while representing both purchaser and vendor (the Oceania Group of Companies) in the real estate transaction, did not pre-disclose that he had a beneficial ownership interest in the development.

This, as with all other claims, has been vehemently denied by Mr Thompson and the Obronts.

But, while unsure of the current figures, Mr O’Brien recalled a May 31, 2011, letter sent to the Obronts’ Canadian attorney, Stephen Hart, in which he noted that conveyances for only 22 of Oceania Heights’ 125 lots were recorded in the Registry of Records as at October 2009.

And, of those 22, some nine lots had been sold to Green County Ltd, a company controlled by Mr Thompson, and three to Howard Obront.

“This indicates that in the 15-plus years that Oceania has been selling lots, only 10 lots were recorded that were not sold to individuals on the Oceania Heights team,” Mr O’Brien wrote then.

Returning to this theme yesterday, Mr O’Brien said: “If they’ve sold 100-plus properties over the last 15 years, why aren’t there more conveyances recorded?

“I haven’t done a recent count, but when I did it was for a very small amount. That’s not how property should be bought and sold anyway, and I know Anthony Thompson and Howard Obront know that.”

Despite his criticisms, Mr O’Brien agreed with Mr Smith “that it would be helpful if the parties could work this out in settlement. We want to find a speedy and cost-effective agreement to get the development back on track. If they’re willing to fix it, great, let’s sit down at the table.”.

Yet he added that his clients were concerned that the Obronts and Mr Thompson, “as evidenced by the lack of a substantive reply”, were simply trying to delay and “drag out” the matter as long as possible in a bid to frustrate the homeowners.

“The owners are sceptical that the developers have a sincere desire and/or ability to resolve the issues,” Mr O’Brien told Tribune Business.

“I’m confident they would rather get their property interests and documents sorted out and get compensation for the additional expenses they’ve undertaken.

“None of the people we represent did not first try to resolve their issues with Oceania Heights and Mr Thompson. They only came to us after becoming absolutely exasperated at being ignored.”

Mr O’Brien also took issue with Mr Smith’s assertions that a Privy Council ruling in favour of Oceania Heights, over the disputed ownership of 11 lots at the project, would resolve all issues.

He explained that if Oceania Heights won, it still did not have ‘fee simple’ title to the 11 lots, as they were excluded from the title deed that transferred the 40-acre site’s ownership from Willard Clarke Enterprises.

At best Oceania Heights had an ‘equitable interest’ in those lots, Mr O’Brien argued, being able to purchase them, rather than a fee simple interest.

He added that it was incorrect for Oceania Heights to represent in conveyances selling some of those excluded lots that it held fee simple interest, saying: “That is not how property is sold in the Bahamas.”

Mr. O'Brien is absolutely right. There are no owners, to my knowledge, who are happy with their purchase in Oceania heights. Good for him to step up to the plate !! Mr. O'Brien is a lawyer with integrity.