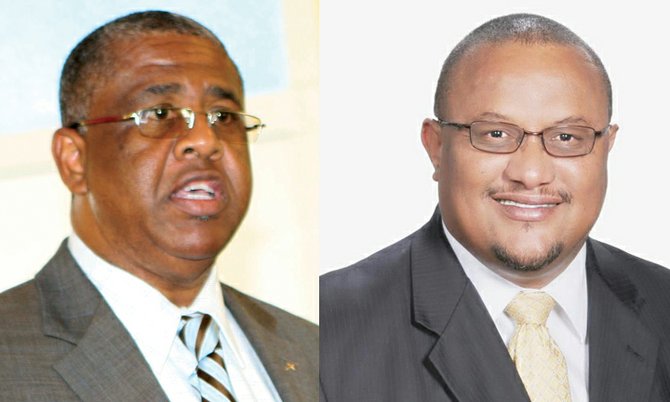 AMID all the sound and fury of the ongoing the National Insurance Board saga, one voice rang true last week – that of former BEC chairman Fred Gottlieb.

He reminded us that while undeniably entertaining, the public spat between NIB director Algernon Cargill and the newly appointed chairman Gregory Moss has some actual value beyond its qualities as political soap opera.

In response to claims by Mr Moss that he ran up more than $240,000 in charges on his corporate credit card over three years, Mr Cargill denies any wrongdoing and points out that a review found the card was not misused.

He in turn, alleges the existence of several unexplained charges on Mr Moss' own NIB card, including some for "large amounts of alcohol and food" at the Hilton Hotel, despite the chairman being provided with a $125 allowance whenever he is in Nassau.

But, asks Mr Gottlieb, regardless of who is telling the truth, why does either man – or any other member of the board of directors for that matter – need a government issued credit card in the first place?

"I served as chairman of several public corporations and, as such, did not approve credit cards being given to any board member (including myself) as I deemed it to be unnecessary and undesirable," he said.

According to the hefty affidavit filed by Mr Cargill last week, the card was approved for use in "business development and conduct of board business; as well as to execute purchases where credit card payment is required; and to mitigate against the inherent risk present when in possession of cash; and for use as and when required as is customary in today's business environment."

But would it not make more sense, in order to avoid allegations of misuse of public funds, both valid and false, that such individuals simply charge work expenses to their own credit cards, with reimbursement coming after proof they were engaged in legitimate company business?

Surely, we aren't expected to believe such luminaries of commerce and industry as Greg Moss and Algernon Cargill can't get a local bank to extend them credit.

How many other public service chairmen, directors, board members are currently packing government-issued plastic? At what rate is this privilege abused with impunity?

"But this is how things are done in the business world nowadays," some who are more accustomed to the corporate culture, may say. Well this isn't the business world, it's the Bahamas – which suffers at the moment from double digit unemployment and severe revenue shortfalls. We are in no position to let public funds slip away unaccounted for.

The credit card issue is, in fact, only one of several "undesirable" tendencies brought to light by the Moss-Cargill blame game.

Take for example, NIB's contract for property insurance with Bahamas First. Mr Cargill's affidavit alleges that during the application process for a replacement firm, Mr Moss ordered him to award the contract to one of the bidders, Star General Insurance, despite the fact that this would have been "improper" because the other contender had yet to issue a proposal.

Mr Cargill claims the Superintendent of Insurance confirmed "management's concerns to be material".

But how can the scenario alleged even enter the realms of possibility? Why is the process for selecting a company for a government contract not enshrined in law?

In the interest of transparency and anti-corruption, why is it not explicitly illegal for any public servant, right up to the prime minister, to arbitrarily choose the beneficiary of such a contract?

There is also the matter of Kenuth's Electric, which it is claimed received around $8 million worth of contracts from NIB.

Mr Cargill denies he is a friend and former colleague of the owner and asserts he was "not involved" in the decision-making process.

But questions of nepotism aside, why, under any circumstances, should it be possible for one company to benefit to such a great extent from a government department, to the virtual exclusion of the rest of the industry?

Mr Cargill's affidavit notes that during the renovation of NIB Headquarters beginning in 2009, the project manager recommended that "due to the specificity of electrical work required, NIB not engage a variety of electricians for various projects so as not to compromise the environment and to be able to determine which company was at fault" should anything go wrong.

All well and good, but in such extraordinary circumstances, the Minister for National Insurance should be required to bring the matter before the Cabinet – or better yet Parliament, so the public can know how its money is being spent.

The construction of the Fresh Creek Clinic furnishes a similar example.

Mr Cargill's affidavit alleges Mr Moss accused the director of intervening in a contract to award it to his cousin.

Saying the discussion to award the contract to HEW Construction came from the quality surveyor, not him, Mr Cargill claims the contractor being replaced was thought to lack the requisite building experience, was said to have asked other contractors to share NIB jobs so he could "receive a portion of the contract proceeds" and had been accused of requesting "kickbacks".

The affidavit also claims Mr Moss ordered that the notice dismissing the first contractor "be rescinded".

The immediate question that springs to mind is, if a contractor is suspected of illegal behaviour while on a government job, why is it not public service policy to report it to the police for investigation?

Such decisions could then be made on the basis of evidence instead of hearsay, and would be much more resistant to outside interference of the kind alleged.

Frequent interference is the essence of Mr Cargill's complaints against his new chairman.

For example, he claims Mr Moss directed him to surrender his full authority, including control of human resources, to newly appointed senior vice president Cecile Bethel.

Mr Cargill notes that "due to the sensitivity of HR matters" it is established corporate practice "to ensure that the executives who have legated authority for HR matters continue to exercise those functions while the CEO is out of office, to avoid anyone seeking to advance separate causes with the temporary authority held."

He adds that Mr Moss "sought to control personally the day-to-day operations of NIB."

But, he points out, "My role as director and CEO of NIB, pursuant to Section 40 (1) of the National Insurance Act, provides that I shall be the chief executive officer of the board."

It does indeed, but the Act obviously needs amending so as to be more specific about what this means.

Better yet, the distinct roles of all CEOs and chairmen across the public service should be clearly defined and delineated in law, to avoid any future confusion.

In particular, because they tend to be political appointees, board members and chairmen should be barred from assuming any functional role, confining themselves to oversight and broad policy formation.

This would perhaps bring an end to the "we reach" attitude that seems to crop up on these boards whenever the government changes hands. Mr Cargill goes on to accuse Mr Moss of:

• Ordering that they switch offices and advising a staff member to "contract an interior decorator to ensure the former director's office, now occupied by the chairman, is decorated at a standard befitting of a minister."

• Seeking to have a $42,000 energy study of NIB's properties conducted by a newly formed Grand Bahama company of his choice, when a recent study of the same kind has cost the Board only $3,000.

• Pushing NIB to invest $10 million in a private venture, against the advice of management, by saying Cabinet ministers Ryan Pinder, Khaalis Rolle, Michael Halkitis and Prime Minister Perry Christie himself wanted it approved.

Whether valid or not in the particular case of Mr Moss, do these allegations not epitomise the behaviour of far too many whose positions see them straddle the line between politics and the public service in this country?

"Constant experience shows us that every man invested with power is apt to abuse it, and to carry his authority as far as it will go," Montesquieu wrote.

Whether or not anyone at the top of NIB fits this model is now for a court to decide. But the real lesson of Cargill vs Moss is precisely the existence of a grey area at the top which facilitates favouritism and corruption, and encourages all manner of overreaching and self importance.

If anything productive is to come of this argument, it will be a greater understanding not only that vague laws and lax regulations

have nourished a continuous squabble for power and influence at the top of our public institutions, but also that at the end of the day, the average citizen is the only real victim of this state of a affairs.

On the off chance Prime Minister Christie might be inclined to address the situation in a meaningful way, a fun place to start would be a public review of all cars, drivers, credit cards, expense accounts and other perks and privileges enjoyed by chairmen, directors and general managers in the government's employ.

Email questions or comments to pnunez@tribunemedia.net, or join the conversation at www.tribune242.com/opinion/insight

It is unfortunate but really I am not surprised. A political culture has been bred in this country since 1967 which encourages the abuse of public entities by the elected official and which is based on a belief that pillage and destruction is justifiable in the name of party affiliation. Elections are about choosing the lesser of two evils, i.e. which group do we think will tief the least. There is also the willingness of the voting public to ignore flagrant abuses of power and an acceptance that those who offer themselves for political office are really only doing so to enrich themselves at the public expense. In this whole NIB debacle, anyone watching from the beginning knew that the **** was going to hit the fan eventually simply because there was some political syncophant who was tapped for the Director's job. Except there was one problem, there was a sitting Director with a recently renewed contract. So, how do you get rid of him? Easy! From day one you embark on a systematic program to neuter and discredit him. Then you engage a smut, gutter publication to spread the "word". I wonder why politicians believe that they are somehow immune from the consequences of their actions...In the words of the late Sir Lynden Oscar Pindling I say to them "what goes around comes around my brudder!" Today for me, tomorrow for you!!