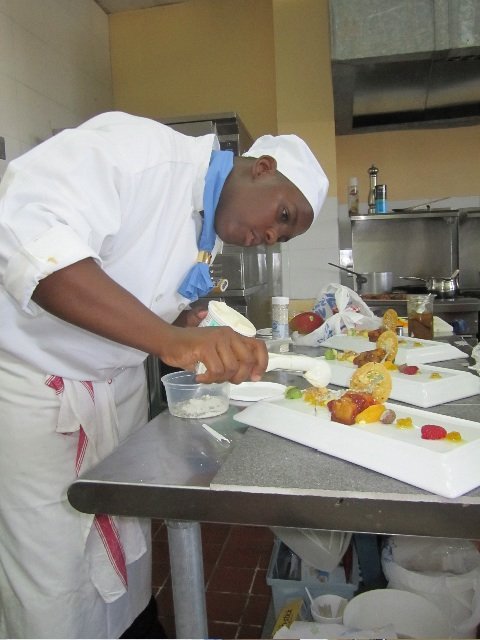 After the results were announced, the Temple Christian High School student said he plans to again compete in the national championships, scheduled to be held on March 15 when $3,300 in scholarships will be at stake.

"The competition again saw a number of new and interesting dishes," said Sharon Ferguson, Ministry of Education home economics officer and co-ordinator for the championships.

The event, now in it's 20th year, is sponsored by Mahatma Rice and Robin Hood Flour, both distributed in the Bahamas by Asa H Pritchard Ltd, and is organised by Keith Parker of PS Advertising and Public Relations.

Chef Ron Johnson of Savory Art said: "Annually, the Junior Chef Competition consistently impresses me and other professionals in the culinary field. It is remarkable to see the display of creativity and skill from high school students.

"I am assured in saying that the variety and types of dishes they concoct are advanced for their level; I can't even remember making these types of dishes at such a young age. Every year the level progresses, as it should.

"Mr Dwayne Sinclair's dishes were truly paramount in terms of execution, creativity and skill. For a split second, I thought a professional chef was in the kitchen.

"It was amazing how he maximised flavours and complemented them.

"For example, the way he wrapped his cooked rice around the flattened conch (similar to sushi) and presented it quietly put a smile on my face. I look forward to seeing his star rise in the culinary galaxy."

The runner-up was Antonique Williams of CV Bethel Senior High School with 686 points.

She scored 352 for her Sunshine Rice Roll and 334 for Chocolate Strawberry Double Decker.

Schools choose their own champion young chefs, who compete on each island or in a district.

Each island or district sends its own champion to compete for the title of Bahamas Champion Young Chef.

This year's final will be hosted at CC Sweeting Senior High School in Nassau.