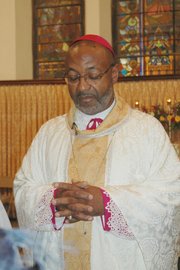 The service took the form of a Pontifical Eucharist, with Bishop Boyd as the Celebrant. In attendance were The Most Reverend Drexel W Gomez, retired Archbishop of the Province of The West Indies, and Assistant Diocesan Bishop, and many Priests, including The Reverend Scott Brennen, Rector of St. Patrick’s Anglican Church, Governor’s Harbour, Eleuthera, accompanied by 15 acolytes.

Also in attendance were their Excellencies, Sir Arthur Foulkes and Lady Joan Foulkes. Lady Foulkes is a member of Holy Cross Parish, where Bishop Boyd served as Rector prior to ascending to the position of Diocesan Bishop.

The Venerable Harry Bain, Rector of the Pro-Cathedral of Christ the King, Freeport, Grand Bahama, and Archdeacon of the Northern Archdeaconry preached the sermon, and music was provided by the Anglican Youth Ensemble. Organist was Dr. Sparkman Ferguson and the Serving Choir was comprised of members of the Guild of St. Ambrose.

His early schooling took place at Quarry Mission and Wilton Albury Primary Schools, and Cathedral Day School. He continued his education at The Government High School and St. Andrew’s School, where he was Head Boy.

In 1986 he was ordained Deacon in St. Agnes Church, by the late Bishop Michael Eldon, and on June 24th, 1987, the Feast of St. John The Baptist, Patron Saint of the Diocese, he was ordained Priest.

Bishop Boyd is married to the former Joann M.A. Gray, and the father of three sons, Zane, Joash, and Nathan.