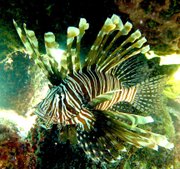 Deep Creek--This year, Deep Creek's annual Conch Fest will experience a massive lionfish invasion. June 2, the homecoming will host its second "Lionfest" lionfish Cook-off. Restaurants and chefs from across Eleuthera have been invited to compete in the event. Participants will each prepare a unique and original recipe featuring the delicious invasive species.

For a donation of four dollars, the public can sample each lionfish dish and vote on their favourite. Donation funds will be awarded to the winner, along with a commemorative trophy to be presented to new winners in subsequent years.

Event organiser Isobel Flake spoke excitedly about the public reaction to lionfish tasting that she has witnessed on Eleuthera so far. "When people try it they say: 'it's so good, it tastes just like grouper. Why isn't it in restaurants? Where can I find it?'"

The most recent in the community outreach efforts of the Cape Eleuthera Institute's Lionfish Research and Education Programme (LREP), Lionfest aims to encourage connections between fisherman, local restaurants and their fish eating patrons. "The basic idea of the competition is to highlight lionfish as food and to establish a market for that food source" said Skylar Miller, LREP manager.

Since non-native lionfish were first spotted in Bahamian waters in 2004, their presence has been detrimental to local marine ecosystems. They prey on young populations of native fish species and since there are no native species that are known to naturally control lionfish, their numbers have increased rapidly. Conservation efforts have turned toward establishing local predators for the fish: humans.

LREP hopes that once people try it, they will start asking for lionfish at restaurants. Then, restaurants will support that demand. Increased consumption of lionfish on Eleuthera would provide a number of benefits: local fishermen will profit by increased demand for the fish and local marine ecosystems will benefit from fewer and fewer of the harmful fish. Increased consumption of lionfish may also relieve pressures on other exploited local species, including grouper and snapper.

Last year's very first Lionfest Cook-off showcased three local chefs, with the title of best lionfish dish going to Charvette Strachan. Miller called it "probably the most successful lionfish awareness community outreach project LREP has been able to do." So, this spring, organising another competition and garnering more island-wide support was a priority.

The biggest challenge in organising the event has been finding local fishermen to supply the competitors with lionfish. Though, Ms Flake has been impressed by the enthusiasm she has seen for the competition while "just talking to people around the island. One guy exclaimed: 'oh a lionfish cook off? I can make a lionfish lasagna that will knock your socks off!' It's just a matter of talking to these people and getting the word out," she added.

LREP has conducted safe lionfish handling and harvesting workshops at local restaurants, including Rainbow Bay and The Beach House in order to support the event.

Citizens in New Providence, see how these out islands use positive means of gathering their population instead of a one track mind of these dangerous drink offs eg. wet n mad or beer fest.

and we call the out islanders backward...