Rollins Claims To Have Evidence Of Fnm Election Day Bribes 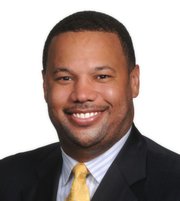 ACCUSATIONS that the FNM bribed supporters in the lead-up to the election continued in Parliament yesterday, with Fort Charlotte MP Andre Rollins claiming he had evidence to prove it.

Rising on a point of order, Dr Rollins said the claims of PLP campaign corruption levelled by MP for East Grand Bahama Michael Turnquest were hypocritical, as the former government sought to secure political support by handing out contracts.

He said: “The fact is I have evidence to prove that the former administration was giving out contracts days before the election in the hopes of wooing supporters.”

During a meeting of the Senate on Monday, Minister of State for National Security Keith Bell accused the FNM government of “handing out envelopes of money” on election day.

Mr Bell said on May 7 he witnessed first hand, men in FNM T-shirts handing out money and giving bribes. He also said the men were being protected by members of the Royal Bahamas Police Force.

“Let me tell you what I heard and saw directly, what I witnessed first hand during election day.

“On election day, the Free National Movement were giving out envelopes of money. The PLP government and I have evidence,” he said.

Prime Minister Perry Christie has also accused the former administration of seeking to bribe voters with jobs and contracts.

But Desmond Bannister, FNM Senator, denied the former government was handing out cash during the election campaign and demanded Mr Bell withdraw his comments.

The FNM again denied the allegations when, in a press conference held at FNM headquarters on Tuesday, opposition leader Hubert Minnis rejected Mr Bell’s claim that FNMs were “handing out envelopes of money on election day” and pointed out that the minister “might seek to explain why, particularly given his past career on the Royal Bahamas Police Force and the fact that as an attorney called to the Bahamas Bar he is an officer of the courts, he did not see it fit and necessary to report a crime which he alleges to have seen or which was reported to him”.

He added: “Further, given his present position, he might advise if he proposes to have the police investigate the crime and cause charges to be laid.”

What is the problem with members of the PLP government? One month has passed and these guys are still in campaign mode. Campaign is over. It's governing time now. Stop throwing out vain accusations and tell us how you will develop our country, protect us from criminals and create opportunities for our off springs. Empty vessels make the most noise and PLP members can't shut their mouths.

whats the deal PLP you won ,usually its the losers claiming dirty politics

Yer but CC I didn't hear any outcry when Desmond Bannister made his recent accusations about the government getting money from number houses. Such a lop-sided business this thing called politics can be. The FNM makes accusations and I believe the PLP or any other party has the right to defend itself. Mr. Rollins is not a cabinet minister. He is a back bencher and he should defend himself and his party. His comments have no bearing on the governments ability to do its job. I really wonder sometimes where Bahamians learned to 'reason.' In other words his commentary is not a variable that alters the performance of the government. So what he says should be either here nor there when it comes to the assessment of the government. Then there is the poster who says there is 'vain' commentary being thrown around. Isn't the FNM just throwing around so called 'vain' comments as well? Bannister making claims, Thompson making claims, Charlie Maynard making claims. The only two people in that party who look like they can keep shut is the leader and the deputy leader. Oppose for sensible reasons. Not just to get your name in the papers. I've said it many times posting on this forum I am a PLP and quite critical of the party as is seen in many of my previous posts. I call a spade a spade. What gets me about FNMs is that they always appear to be so self righteous. The FNM never does anything wrong it seems. A party that the people rejected yet it still upholds this sense that it is somehow ethically or morally superior. Many FNMs need to get off their high horse. Both parties have some serious dirty laundry. So please let us not go down that road.

Guilty conscience is a serious crisis, you have to find another to say ..."I saw you doing it TOO"...it helps to ease and justify that "well I can't be wrong if I say you did it too..." but whether the other person did or didnot the FACT that you did are YOU NOT WRONG!!....Let's move on, you got the votes so it doesnt matter whether you did it honorably or questioningly you received more votes...so CAN YOU PLEASE GET TO WORK!!!YOU WANT IT&lt; YOU GOT IT&lt; SO NOW GO DO SOMETHING WITH IT!!! Enough............

It appears the PLP have no answers for the problems at hand so they are trying to deflect criticism. It's pathetic

Its not what you know its what you can prove. Everyday a new member says what the other says. I have evidence. What thinking Bahamains have is the evidence that this PLP thus far has no SUBSTANCE of Governing THE BAHAMAS. Get on with the job or RESIGN and carry your donkeys else where.

I must agreee with the above comments. Before election I along with many others was fed up with the FNM, thats why on election day we voice our opinion. If we believed that the FNM was doing such a great job and something fishy was not going on they would have been right back here now. However they are not so stop with all the talk and do what you was put there to do. If I already break-up with a woman, I don't need to hear now that she was bad. Shut up and shake.

I will tell the PLP this. A bird in the hand is better than two in the bush. All this talk, talk, talk, is just the bush shaking. We dont know what the hell in it. At least we could see the poor constructed roads and start of the hospitalfrom the FNM. Keep running your mouth, five years aint as long as you think. Same way the people switch on the FNM... anyway keep running ya juicy mouths. That ball done been standing still too long. Today marks one month and not even a slight roll or bounce - come on. Think year four you going to rush and bitc h up things and try say see what we do. Ask the FNM what happen if you to busy talking to see.

Dr. Rollins, The government is urging Bahamians to stop hiding criminals. Sir, you claim that you witnessed a crime-- Dr. Rollins report your observations--turn in your photographs etc to the police. If you cannot support your claims, shut up! If you can, be a good citizen and do your duty. Isn't a vote precious! Your colleague Mr. Bell should also follow this advice. It is a shame that a man who is a former police officer is using a criminal offense for political mileage rather than bringing the perpetrator to justice.
Gentlemen, you were elected because you claimed that you could do a better job running this county. Do your job. You are not on the campaign trail and we, the people, we will not tolerate your inmature behavior and antics for TV and newspaper coverage. We see your game. Act like legislators not clowns.

rollins... you are the new guy! so understandably you want to have your name out there and your voice heard... however, if you would like to make an impact and not piss ppl off, talk about and address issues that matter, such as crime, education, government policy/ decentralization, national debt... make me want to remember your name in a positive way

the election is OVER, and your party is in power and by a big win.... please lets move forward, because if my memory serves me correctly... 'one ppl united in love and service'...

show me sumting else!!

This is so interesting. I voted in the Ft. Charlotte Constituency...Mr. Rollins should really be the LAST person to discuss vote buying. I'm not to sure what constitutes as vote buying, but if it includes paying utility bills of your constituents, discretely handing out money at events in the area, or pulling out your wallet on the day of election...taking money out...and giving it to constituents (perhaps these are all legitimate forms of assisting the poor poor poor people of ft. charlotte and totally wrong)...then I suggest this back bencher say no more on this matter. BTW, I was wondering why on that VERY VERY HOT day, he was walking around in his plp jacket...can anybody help me out with an answer mmmmmmmmmm

Why these fools don't stop talking about their "evidence" and just table it!?!?!?