MINISTER: Prisons should be last resort for non-violent and petty crimes 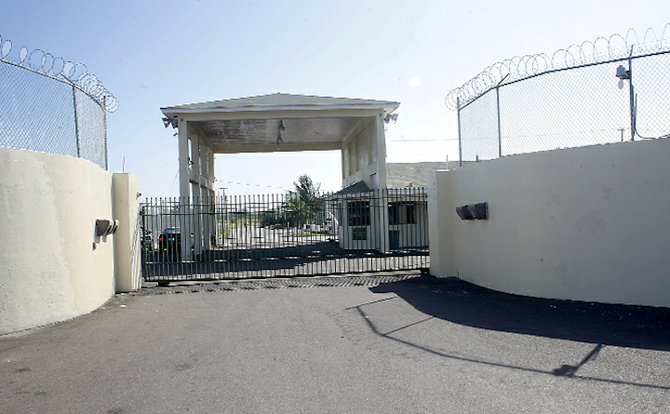 PRISON should, as far as possible, be a last resort for persons charged or convicted of non-violent, petty crimes, Minister of National Security Dr Bernard Nottage said.

However, he said, focus should be placed on the treatment and rehabilitation of persons charged with or convicted of minor and non-violent offences.

"Indeed the evidence is clear that for dangerous, hardened criminals, punishment works mostly when it is swift, sure and severe," Dr Nottage said. "For petty offenders, on the other hand, treatment and rehabilitation seem to offer the best prospects - not incarceration."

"While tight-fisted policies may be a popular posture, the evidence is clear that only when prisons are used as the sanction of first resort for hardened, dangerous and/or violent offenders, but the place of last resort for petty, minor offenders, society tends to be safer and remediation amongst wrongdoers more assured," he said.

"I leave it to you to determine which of the countries cited above has the highest level of crime," Dr Nottage said.

Can Minister Nottage please stop speaking in public....now he saying "Go ahead commit petty crimes cuz you will not be punished". At least wait until you have a full rehabilitation plan in place ready to go before saying this...

He never said you will not be punished. Don't lie you got an F in reading comprehension hey. Mr. Nottage gave two methods which other countries uses to deal with pitty crime offenders, yet for the lack of your comprehension skills you misunderstood what he said. Typical FNmnopqrstuvwxyz.

I try to research topics before I argue about them. You seem to glance through the abbreviated article look at what others said and then blindly reply not forgetting the attempt to insult. You should read some books on PMA bruh... and anger managament

Your comment was "Can Minister Nottage please stop speaking in public... now he saying 'Go ahead commit petty crimes cuz you will not be punished". What the hell you read to comprehend him saying that. Minister Nottage stated, "PRISON should, as far as possible, be the last resort for persons charged or convicted of non-violent, petty crimes. Prison is a source of punishment therefore using the phrase LAST RESORT means that there will be punishment but prison should be the last option. You always quick to think someone wants to insult you when you yourself is throwing the first insulting stone. Do you not class commenting can Minister Nottage close his mouth in public as an insult? Or by assuming he is telling petty criminals to commit crime cause there will be no punishment a form of referring to him as an idiot. Whose the one really blindly replying not forgetting the attempt to insult. And no its not mere anger towards you, its just sickening when I see a person like yourself, take anothers words and rearrange them to have a totally untrue meaning. The only part of your first comment that made sense and I will agree with anyone who makes sense is the last sentence. Still even with your comment, YOU still omitted the criminals means of punishment. When Minister Nottage stated, "focus should be on treatment and rehabilitation" he never mention prior to that what punishment would be handed down first but again referring to his opening sentence, a form of punishment would exist.

Yes he did mentioned treatment and rehabilitation but that came after stating prison shoud be the last resort of punishment. Whatever the means of punishment is given (community service, pay a fine etc other than prison) then treatment and rehabilitaion to curve an individual from returning to the system would be the main focus. Again I will agree with you that before producing an incomplete solution Minister Nottage should have had a better walk thru ready for press but his intent was never to make criminals think they would not be punished.

Okay, omit the first part of my original statement.You are right he did not say that. You feel no one will think that way, then so be it. Rehabilitation is being proposed as the punishment but there is not yet a system in place. I read the full statement as well as the article above. Have you heard of Drug Courts in the US? Where non-violent drug abusers are sent to rehab as opposed to jail. It can be a successful program but not 100%. Sometimes criminals abscond from the Centers, sometimes they recommit the crime because they feel they got off. Sometimes just because they were not charged with a violent crime doesn't mean they are non-violent. There are many things to look at.

Taking your anger management suggestion let me ask you with no attitude. Wouldn't the rehab center be a place of lockdown, just not H.M.P.? You mentioned sometimes criminals abscond from the Centers, don't they the same with prison? Sometimes they recommit the crime..., don't persons whom went to prison sometimes recommit the crime. Now I'll agree with you that Minister Nottage should of have mentioned the existance of the Rehab Center in his statement along with community service or fines but I'm sure he's not trying to paint a picture that if you're a petty criminal just come for some rehab and go. No attempts in anything proves 100% effective however the attempt in this case is to try focus on mentally changing a petty criminal's view of life to make better of him/herself.

Agreed....A Rehab center isn't quite locked down like a jail though...they get frequent visits, sometimes weekend passes, take classes, have group meetings, counselling, random drug/alcohol tests.etc. And not all rehabilitation programs requires it's participants to live at the complex. They can live at home, work at their job but still attend sessions and check in with there PO or Counselor. It's a different program. And it all depends on the individual and their willingness to do better.

The statement didn't say that....His entire statement went on to say that the focus for jailtime should only be based on five types of crime. Petty crimes should be treated with rehab. This can be easily misunderstood and think petty crime offenders will have it easy. He did not explain what he had in mind for the rehab nor said what he had in place already. So he ahould have waited to make the statement.

So Dr. Nottage ! are you going to build another jail ! or do you have somewhere that " petty criminals" should do their time for commiting their crime ? Sounds like you have a resort in mind !, I think criminals should be treated like just what they are , CRIMINALS. I think that ALL inmates , who are not serving a life or death penalty, should be rehabilated, if they are going to be released into society. Thats probally why there are so many repeat offenders, because some of the criminals do not have any life skills to begin with. I suggest that, ALL inmates be given the same fair share......GO HEAT !!