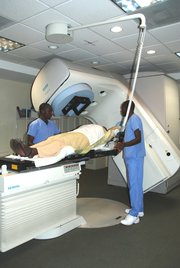 Dr Crispen Chamunyonga is pictured with a colleague using the radiation machine.

Radiation therapy is a very important modality in the treatment of cancer. It is used either as the sole treatment or in combination with other treatment modalities such as surgery and chemotherapy. Only one facility is available in the Bahamas that uses radiation to treat various types of cancer. This type of treatment requires highly complex radiation beams that are generated from the robust machines.

Radiation therapy damages cells by destroying the genetic material that controls how cells grow and divide.

When people think of radiation, they think of atom bombs and burning. This is worrisome, as such misconceptions and fears about radiation therapy lead many patients with cancer to avoid the potentially lifesaving treatment.

As a medical dosimetrist and radiation therapist, I interact with patients who often harbor some false beliefs or fears about radiation. Most patients express their concerns before they start radiation treatment.

They have many irrational worries with respect to radiation therapy that can strongly influence their treatment choice. For example, some men thought that radiation is painful and that it could not be controlled because it is invisible; that it would harm surrounding unprotected organs such as the bladder, rectum, bowel. In addition, patients are often worried that they will become radioactive themselves, which is not the case.

Before treatment is delivered, a patient undergoes special CT (computerized tomography) scans that enable the radiation oncologists, medical dosimetrists and physicists to collaborate and design a computerised treatment plan.

Technology now allows the radiation treatment to be sculptured precisely through the use of computerised treatment techniques such as 3D CRT (three dimensional conformal radiation therapy) and IMRT (intensity modulated radiation therapy) that allow the dose to focus only on a particular area and avoids or minimizes radiation to the surrounding organs.

Radiation therapy is not a painful treatment. If you are treated with external radiation, you will not be radioactive at any time. The radiation you receive delivers its dose to your tissues within an instant -- there is no lingering radiation once the treatment machine is turned off. Therefore, friends, family, and co-workers of cancer patients will not be exposed to radiation.

Most patients are often amazed when they realise that the treatment is not harmful and it takes less that 15-30 minutes such that patients continue with their daily routine.

There is also a misperception that radiation makes one lose your hair. This comes from the confusion of radiation and chemotherapy.

Radiation therapy is a "local" treatment, which means it is directly focused on the area with disease. For example, if a woman is undergoing radiation treatment just to the breast, she should not expect to lose hair on her head.

Hair follicles will only be affected if they are in the path of the radiation beam, for instance during treatment of brain cancer. However, this is not permanent as the hair grows back.

Occasionally, breast cancer patients may develop a sunburn-type reaction which almost always heals rapidly. Other side effects may include nausea and vomiting when treating the abdomen, medications are available that minimize such side effects.

All side effects depend on the radiation dosage and also the area being treated. It is therefore not proper to generalize such reactions since patients get different doses to different treatment areas depending on the type of cancer.

As radiation therapy remains a mainstay of treatment for many forms of cancer, it is my suggestion that patients diagnosed with cancer, who have been referred for radiation treatment by their doctors, take the initiative and explain their fears to a radiation oncologist, who should be able explain any possible short term or long term side effects of radiation treatment.