Next year for gambling vote 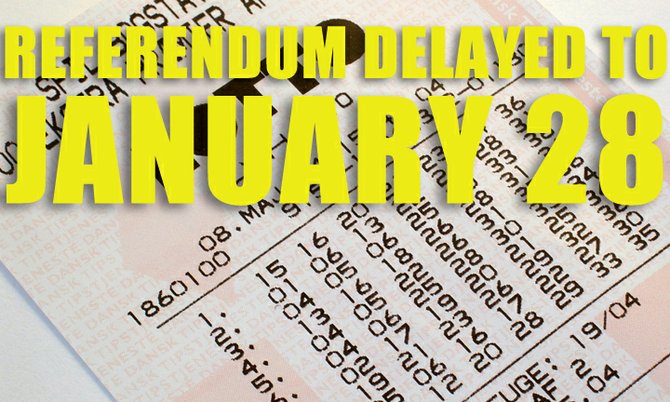 THE Christie administration last night announced that the referendum to legalise web shop gaming in the Bahamas will be postponed to January 28, 2013.

And despite consultative advice that a national lottery would not be sustainable in the economy, Mr Christie said a question relating to that form of gaming would also be included when voters head to the polls on the new date.

These changes, he added, came with a primary realisation that the electorate lacked a good knowledge of what a majority “no” or “yes” vote could mean for the country. In addition, he said further consultations needed to be completed and important amendments to the Gaming Act passed in the House of Assembly.

Mr Christie said the government would, today, present those changes as to form the legal framework on web shop gaming. The question of Bahamians being allowed in casinos is still not up for consideration, he said.

“I am a Prime Minister who listens,” Mr Christie said, “and in listening to the still evolving public discourse on the forthcoming referendum it has become clear to me that more time is needed before the Bahamian people are called upon to vote.

“Notwithstanding that initial advise, the government has decided that it would be in the interest of the broadening of democracy and consistent with its charter for governance to include a national lottery in the referendum question.

In the lead up to the referendum, Mr Christie cautioned the public to ensure that they are well versed on the pros and cons of web shop gaming. He said during that time, the government would take a more active role in educating the electorate.

As promised, the government’s hired consultant was in attendance.

James Kidgell, a partner in the Dickson-Wilson Chartered Accountant firm based in the United Kingdom said his firm took several factors into consideration during the consultation process.

“On simple assessment of where Bahamians are likely to spend their gaming dollars on lottery, human greed takes you to wanting to win big and with the ease of access geographically and the way lottery tickets are sold in the Bahamas then it becomes difficult to just see how a Bahamian lottery may be as successful as one may wish.

Based on the figures, and information gathered, Mr Kidgell said his team found it difficult to see how a commercial enterprise would see the returns they’d expect to get from participating in a national lottery.

Man right when I was gettin used to the PMs decisiveness....

lol...perry christie prime minister of the commonwealth of the bahamas...simply a mess!

PM Christie now I too starting feel that even you don't have the slightest clue what's running from your mouth. You yourself really sound confused?  PM to take this "faulted' from the get-go gambling measure to Bahamians it is not enough to rise in the House to announce a change of vote date. It requires "truth." And, right now PM you are not being trusted on this one that all information has been looked at before taking this to a vote?

What hurts me PM is you are wasting an unique opportunity for your majority government to have taken whatever steps are necessary to gather sufficient decision making information on the numbers rackets, rather than "pushing" this vote upon Bahamians who regardless of the date held have more pressing paychecks and job security issues they want dealt with, way ahead of rushing with your government's desire of further enriching a few hand-picked numbers men's cash flow with "legal" millions.

With all due respect PM only blind politically-minded Jackasses, and maybe wearing gold shirts, would not agree that it's a politically dumb to use the lumping of ordinary donors who earned their money legitimately, alongside numbers men's who collected cash from the poor.

So, now PM you going tell Bahamians that you are going to call upon the Governor-General to issue an Writ of Election to hold a vote to legalize an criminal activity?

PM this is much more to this than just you're postponing your "thing" until January 28, 2013. Ya go'in from bad to worser cause if after you leave Government House you will have to involve the Commissioner of Police, by handing the Commish as Provost Marshall, the Governor-General's signed documents, so he can stand on the House of Assembly's steps, to read the proclamation, duly announcing to the numbers men's that despite their years breaking the criminal laws of Bahamaland, that they're about to be "rewarded" with numbers licenses, using the $1 million as "bond payments, from criminal proceeds?

PM what happens if the GG or the Commish, possibly both, fail to follow your instructions?

I think, Therefore I blog. Comrades you decide what's the truth. Has the numbers men's been peeking into the cabinet rooms of both the Christie and Hubert administrations?