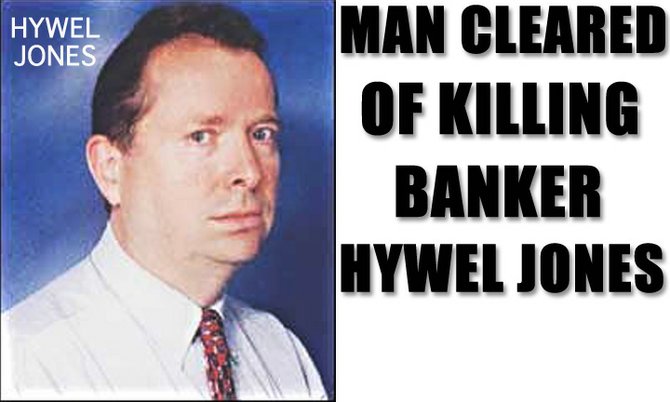 WHO killed banker Hywel Jones outside his Compass Point office in 2009 is the question that remains unanswered after the man accused of his murder was acquitted by a Supreme Court jury yesterday.

It took a 12-member jury a little under two hours to deliberate on a verdict before returning to the courtroom with a 9-3 not guilty verdict that freed 29-year-old Franklyn Stubbs.

Stubbs was discharged by Justice Indra Charles after it was revealed that he had no pending matters before the courts.

“The jury, they knew what was happening,” the lawyer said shortly after speaking to his client who was escorted out of court by police to be formally discharged.

On April 22, 2009, Mr Jones had pulled up in the parking lot of his office when he was approached by a gunman and shot in the back of his head as he was getting out of his Chevrolet Equinox jeep.

Mr Jones was rushed to Doctors Hospital where he died of his injuries two weeks later after being declared brain dead.

Stubbs was taken into custody a year later.

Prosecutors Darnell Dorsette and Basil Cumberbatch alleged that Stubbs was the gunman in an execution-style killing.

However, Stubbs and his attorney denied the claim.

Throughout the trial, the court heard evidence from three witnesses who saw a man near the scene of the crime before and after the shooting.

A construction worker, the prosecution’s main eyewitness, said he saw the man accused of murdering Mr Jones seated on a porch for two hours before hearing gunshots and then spotted the same man running across a nearby field.

The worker said the man had what appeared to be a gun in his hand and soon he heard the sound of a scooter.

John Heney, the business partner of the murdered CEO, said he was on a business call in his office when he heard a loud bang and then a second one shortly afterwards.

He said it was the second bang that got his attention as he looked out of a window and saw a slim, tall, dark-skinned man running away across a field from the Compass Point office.

Looking through a second window, he told the court he saw his business partner Hywel Jones lying on the ground of the parking lot in a pool of blood.

The third witness, an ambulance driver who did not identify the accused when he attended an identification parade, said he saw a man of the same described physical characteristics running across the field seconds after hearing gun shots.

The court also heard evidence from police officers who brought a baluster to court which had the left palm print of the accused on it.

Mr McPhee told the jury the prosecution had not produced evidence beyond a reasonable doubt and that his client was not a cold blooded murderer.

He questioned the validity of the identifications by the witnesses after a visit to the scene compared to what was testified in court.

He questioned the integrity of the palm print due to what he claimed to be a breach in the chain of custody in the handling of the evidence.

Ms Dorsette said the case was nearly “a perfect crime”, and would have remained unsolved had it not been for the palm print found by the police.

She said the accused had not told the court how his print got there despite his claims of never being in the area.

Ms Dorsette told the court that while defending counsel had made submissions about a conspiracy on the part of the police to put the palm print on the baluster, McPhee had the chance to put it to the witness and did not.

The prosecutor claimed the evidence pointed to Stubbs, a man she said, who claimed never to have been in Gambier, but whose palm print was found at the scene.

In yesterday’s proceeding, Justice Charles summarized the evidence for three hours before excusing the jury at 2:30pm to deliberate on their verdicßt. The jurors returned to court at 4:18pm and the 9-3 not guilty verdict was announced two minutes later.

Seems to be the trend of late with murder trials. The accused always appear to get off due to insufficient evidence, etc. Someone is dropping the ball. The Prosecutor or the police. Whoever it is, the real criminals are getting away with "murder". I pray they find the real killer.

The only thing worse than real criminals getting away with murder is innocent persons getting found guilty of it and sentenced to long jail terms, even life. They wicked may escape justice in this earthly court system but they have a higher court to face..remember that.