'Banned' Woman's Speech To Be Read To House Of Assembly 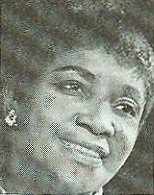 A PREVIOUSLY banned speech prepared by a noted suffragette will be presented during a “special sitting” of the House of Assembly in honour of the women’s suffrage movement‘s 50th anniversary, the Minister of Social Services announced yesterday.

Melanie Griffin was speaking at Police Headquarters’ Paul Farquharson Centre where nearly 100 women, including police officers, gathered for a presentation on the suffrage movement as part of National Women’s Month.

Mrs Griffin announced the sitting will take place on Monday, November 26, and will feature a 1959 speech by Dr Doris Johnson. Dr Johnson was not allowed to deliver her speech in the House by the then governing United Bahamian Party.

“Hopefully it will be a joint sitting of both the Senate and the House of Assembly where we expect that 50 years later – you will recall, those of you who are aware will know – Dr Johnson, who represented the women’s suffrage movement at the time, was not allowed into the House of Assembly, was not even allowed to the bar to present the petition on behalf of the women.

The country is “very proud to be able to do that” and give the speech the prominence it needs, the Minister continued, explaining Rawson Square will be transformed to accommodate those who wish to be apart of the occasion.

“Because the gallery in the House of Assembly is small, we will have a full set up in the Square with televisions so that the general public can come sit with us,” she said.

“We’ll have some students come down and we’re going to have a good time as we celebrate and tribute the women’s suffrage movement, the leaders of the movement, and all those who would have supported that movement. We also intend to lay in Parliament – put a resolution in Parliament where we will be of course paying tribute to our fore-mothers.”

Mrs Griffin explained next Monday’s sitting is part of a larger celebration of 50 years since the suffrage movement.

“This year we celebrate the 50th year, a significant milestone for us. As we celebrate, we thought it was important that we do it throughout the month. You would have seen the exhibition in the Square, you will have seen the telephone books... We want to really celebrate it,” Mrs Griffin said.

She said women “have an awesome obligation to move the struggle forward” and continue the fight for gender equality in the country.