Bahamas Back In Business After Hurricane Sandy 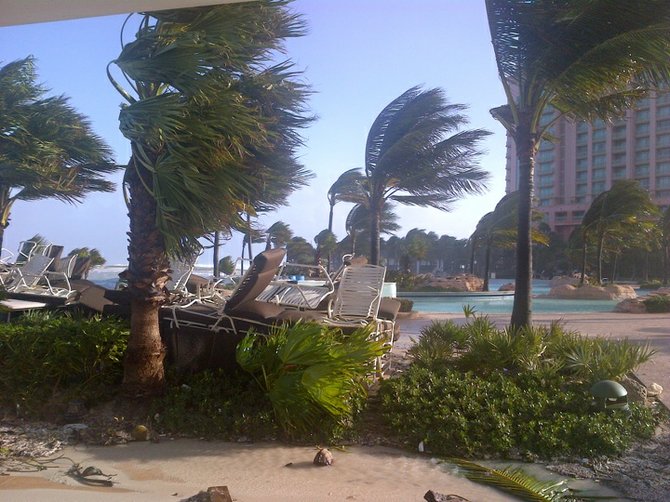 THE Bahamas was back in business today in the aftermath of Hurricane Sandy - a storm which pounded the islands and killed the British boss of an investment bank.

Timothy Fraser-Smith, 66, CEO of Deltec Bank & Trust, fell off his balcony in the midst of the storm.

Police said Mr Fraser-Smith, of Lyford Cay, was found dead by a relative around 9.30pm on Thursday.

He reportedly went outside on his upper balcony to secure a shutter during the storm.

A source revealed his wife was home when it happened and after not seeing him on the balcony, reportedly went outside where she found him on the ground.

After a failed resuscitation attempt, she informed security. The balcony reportedly had no railing.

According to Deltec Bank’s official internet site Mr Fraser-Smith had served as its Chief Executive Officer since 2000.

The private banking institution offers a variety of services including investment management and fiduciary services.

Captain Stephen Russell, of the National Emergency Management Agency (NEMA) dubbed the death ‘regrettable’ - it brought the total lives Sandy had claimed for the entire Caribbean to 22.

Captain Russell said NEMA would be working to assess all of the damage done to the Bahamas throughout the weekend.

It started as a Category 2 hurricane but then became a Category 1 toppling light posts, flooding roads and tearing off tree branches as it charged through Cat Island and Eleuthera.

Yesterday lunchtime, Capt Russell said: “What we are experiencing now in most of the islands is that a number of them have downed power lines which have resulted in the loss of some line communications.

“And many of them are experiencing quite a bit of flooding. As of Saturday through Monday, we hope to get teams from all the government agencies into the islands that have been seriously impacted to start their assessments to see how we can render some assistance,” he said.

Mr Russell said Nassau’s harbour was scheduled to reopen today for cruise shops once some minor repairs are completed.

“I had a walkabout with the Commander of the Port - Patrick McNeil, there are some slight concerns. A number of the large fenders have been dislodged from their jetties and he is in contact with the Ministry of Public Works and Urban Development to see how they can restore those fenders as quickly as possible so they can open the harbour.”

“As you know, one of our responsibilities is that roads are clear and as much as practical, storm drainage takes place. Road crews are out and about as we speak.”

He said a lot of sand washed up onto the roads near Saunders Beach and Sandyport and a large hole developed in West Bay Street near The Caves.

Police will be temporarily closing parts of the road for repairs and other clearance.

Lynden Pindling International Airport re-opened yesterday afternoon. Assessment flights will visit the Family Islands to get a clearer look at what exactly happened.

The storm seemed to have inflicted the greatest damage on Cat Island, which took a direct hit, and Exuma, where there were reports of downed trees, power lines and damage to homes.

“I hope that’s it for the year,” said Veronica Marshall, a 73-year-old hotel owner in Great Exuma. “I thought we would be going into the night, but around 3 o’clock it all died down. I was very happy about that.”

On Long Island, farmers lost most of their crops and several roofs were torn off. The island was without power yesterday morning and many residents did not have access to fresh water.

Power was out on Acklins Island yesterday and most roads there were flooded, while in Ragged Island the school was flooded.

Docks on the western side of Great Inagua were destroyed and the roof of a government building was partially ripped off.

Speaking yesterday, Jennifer Savoie, a New Orleans native who lives in Eleuthera, said that her fiance’s resort, The Cove in Eleuthera, was spared major damage but that power was out.

“We know the protocol and how to prepare,” she said. “It’s in our blood. We were hit pretty hard though.”

The reconstruction process of a house is hard but the reconstruction of an entire city is harder. If you visit http://palmerwest.net">http://palmerwest.net you will discover some really interesting ways in which you can rebuild a roof without spending too much money and with a result that will last in time. A long-term solution is a thing that everyone is looking for.

There is a http://rondaviscustomhomes.com/">custom home builder in Dallas TX that is using the remains of a house or building in order to repair other ones. This is a very interesting approach and a very environmental friendly one. It is important to get creative from time to time if you want to spend less money on something.

They have to be better prepared to deal with such natural calamities in future. However, now business owners have access to advanced technical solutions that offer a better solution. For instance, if you run a restaurant business then you can find the solutions you need at http://focuspointofsale.com/features/">http://focuspointofsale.com/features/.

Though the tragic death of the person is really sad, the storm overall has not been able to cause much damage. The business owners should now try to do their best to run their business as efficiently as they can. They can also take help of http://innoviacmc.com/what-we-do">community association management solutions providers for this purpose.

The hurricane certainly has caused many damages here which they have to overcome and the business owners certainly have to do their best to be able to get back on track. Big businesses often face a tough time because of which the sales graph goes down. In such situations it would be better to attend http://thesalesresourcecenter.com/lea...">sales training seminars to learn about new sales techniques and strategies.

It's very hard to bring to life a house, a corporate building or even a town after a natural disaster of big proportions. The government should invest more in those places that need a new face and this may be a good thing for a town because it has a chance to be better than it was. If you visit http://ondemandcontainer.com">http://ondemandcontainer.com you will see some really interesting options that are also environmental friendly and can be used.

There are many small and medium businesses that are trying really hard to get back on track after an event like this and it is quite hard for them to make an investment that they might not get back in small amount of time. If you are in this situations, you should visit http://www.paddoor.com/">http://www.paddoor.com/ and see some really affordable options that you can use regarding the doors.