Jazz Lovers Long For The Return Of The Jam Sessions 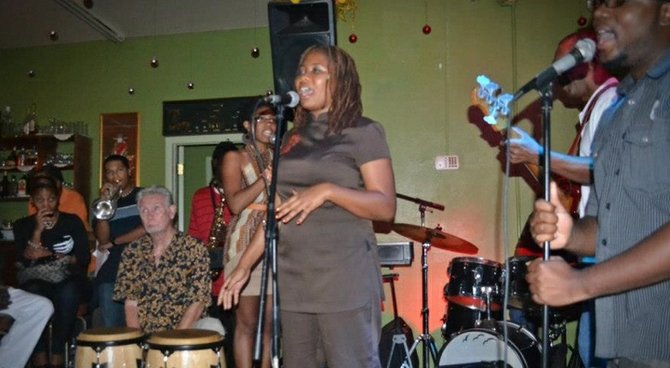 The Jam Session, a weekly open mic for instrumentalists and Jazz musicians, quickly became a hot spot for underground talent when it started last February. The intimate setting inside the Golden Club on West Bay Street, where the Jam Session was based, added to the overall appeal of the Wednesday night live music spot, where established musicians, bands, up-and-coming acts, solo artists and beginners had a chance to perform and showcase their talents on a live stage.

Each session was spontaneous, and the stage was free for anyone who was musically inclined to step on and perform. The space at the Golden Club allowed audience members to be up-close and personal with the musicians.

For several weeks now, Jazz lovers have been clamouring for the Jam Session; it went on a hiatus after the Golden Club closed its doors last month.

“I had to close because the rent was too high. When I first rented the spot six years ago the rent was $1500. After awhile it started to increase. It went to $1800 and before we closed it was $2300. Although the $2300 included electricity, I thought that was too high to be paying monthly, especially because we were hosting free events that benefitted the music community,” said Maitland Thompson, owner of the Golden Club and leader of the Quartz band.

Mr Thompson said he cherished the Golden Club and The Jam Sessions, because the event gave musicians a platform and was a start for several emerging artists. He told Tribune Entertainment that he pleaded with the owner of the building who is also a musician to keep the rent at a reasonable figure, because the space was ideal for The Jam Sessions event, and there was no other venue offering a comparable music outlet.

“There was never dull night during The Jam Sessions. People came out and showed us support,” said Mr Thompson.

“We only charged patrons $5 on Wednesdays. We were doing something really good but (the landlord) just could not see it. There was nothing like that ever held in Nassau before. We were all like family, we got along very well, and the artists benefitted,” he said.

Many talented Bahamian musicians have hit the stage at the Golden Club, including Adrian D’Aguilar, the Quartz band and The Illest. Anushka Wright, a lead performer and organiser of The Jam Sessions, said although a new venue has not been confirmed, the Jam Session will return.

“The show was made up of singers and musicians. I performed many times especially when we first started because people really did not know us. So the team helped to fill the gaps when some artists did not show up or were running late. But the goal of The Jam Sessions was not to have our team members on stage. We wanted people from the crowd to come up and perform. Since we stared, we have seen a wide range of talent, and we hope to see more of that when we continue,” said Anushka.

She said the underlying aim of the event is to entertain while cultivating a fun environment.

“I went to the sessions to unwind and hear other artists and musicians. I liked being surrounded by my peers and in my element in a comfortable atmosphere. It was very freeing. So many different kinds of people come through the sessions. It was a good place to network, and develop your artistry. I have gotten some good opportunities and met some really great contacts as a result of The Jam Sessions,” she said.