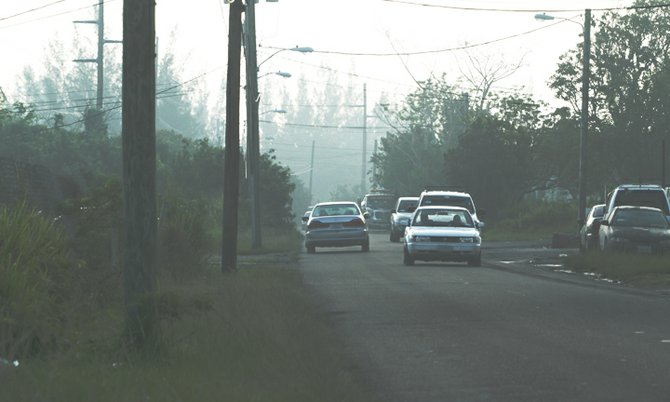 OFFICIALS are struggling to get a handle on a fire at the city dump that has been smouldering since Friday, Fire Chief Walter Evans said yesterday.

A smokey scene near the city dump which currently is on fire. Photo: Kyle Smith/Tribune Staff.

The challenge, Mr Evans told The Tribune was that the flames were being fuelled beneath the waste area’s

surface by a variety of highly flammable materials, including propane tanks, cardboard and cloth.

“Because of the depth of the fire,” he said, “heavy duty machines are needed to get below the surface, at least three to four or more feet.

“Had we been dealing with a surface fire, we would have already extinguished it and there would be no worries, but this thing is burning beneath.”

When asked if yesterday’s relatively heavy downpour of rain would assist with containing the fire, he said it was not likely. Personnel are also challenged in carrying out the task with fumes and smoke still lingering in the air, Mr Evans said.

“Caution and care must be used and there must be a regard for those from Environmental Health and Royal Bahamas Police Force in dealing with the matter.”

In light view of that, officials are now conducting air tests to ensure that no harmful chemicals are being released into the air, Melanie McKenzie, Environmental Health Director, said.

“The Ministry is doing some air quality monitoring as to what is actually burning so that there is no particular danger to citizens and (to find out) what they are breathing in,”she said.

Officials have also agreed that residents of neighbouring areas, including Victoria Gardens which is in the direct path of the smoke, do not have to relocate.

“There may not be anything toxic, but we know that smoke irritates us who have sinus issues so we want people to take precautions. We are also urging them to close their windows as much as possible.

“As it cools, there will be less and less smoke. We are trying to isolate the area. Soak it, turn it, soak it again, cover and then move to the next area. In a few days there will be no smoke whatsoever,” Ms McKenzie said.

Early last year, fire officials were faced with the same challenge at the dump and urged residents to seek medical assistance as soon as possible if they experienced breathing problems, headaches, vomiting, nausea or unusual fatigue.

For our public officials and other to take a casual position on the danger of these fires is irresponsible, uneducated and blatant example of 'CYA' (aka cover your A**). Quit blaming others, take responsibility and get this issue resolved people! Educate yourself....we are not stupid...