Police Block Off Beach Amid Row 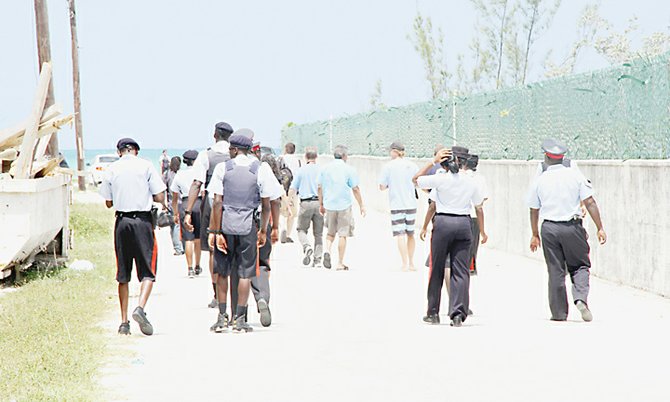 POLICE barred environmental activists from holding a press conference on Jaws Beach yesterday, and also prevented Keod Smith and his workers from carrying on with a clean-up campaign.

A line of about 17 police officers blocked the entrance to Jaws Beach with their patrol cars not allowing anyone to enter.

When the press conference was done, police escorted activists Fred Smith, Robert F. Kennedy Jr. and others to the beach, while keeping the road closed.

Keod Smith said he was responsible for calling the police and asking them not to allow Mr. Kennedy on Jaws Beach because the land is “not public” but “belongs to Bahamians”.

“I am very concerned that the police even allowed Mr. Kennedy to actually come up here from the dock... he was not supposed to come on the land, period,” he said.

“That was the arrangement (with police).

“Part of his campaign was to come out here and effectively do an act of aggression where he has come in on the Bahamian people’s patrimony and to do his Conchservation programme and to dive from here symbolically. It is beyond, in my view, anything that is sensible to what he has in mind to do.

“So as to ensure that we did not have any kind of controversy or any kind of conflict I, Keod Smith, called the police and apprised the police of what we heard and that I was concerned that if in fact the people did what I was told they were coming out here to do it will cause a conflict.”

Fred Smith said he was not at Clifton with Mr. Kennedy to talk about a conflict between himself and Keod Smith. He said: “I am not in a fight with Keod.”

However, Keod Smith said: “For the sake of peace I said I would keep my people away (from Jaws Beach), please keep your people away.”

Keod Smith added that his intention is not to keep Mr. Kennedy or Louis Bacon away from Clifton grounds, but to keep their political agenda away.

“Mr Kennedy is welcome to come here as long as he is not coming here to play his political games. Even Mr Bacon can come,” he said. “But you just gat to know this black people land.”

He said his fight for Clifton is not just a fight for the land, but to also “mentally secure the patrimony that we have” for Bahamians.

“From this point on we are now going to be here every day,” Keod Smith said.

“I hope the police is not going to allow their muscle to be used by Mr. Bacon to achieve what appears is being pursued.”

Keod Smith said he was responsible for calling the police and asking them not to allow Mr. Kennedy on Jaws Beach because the land is “not public” but “belongs to Bahamians”.

Keod is a lawyer?!!? It's not public it belongs to Bahamians?!?!

What does keod think the word public means?!?!?

When did Keod gain control of Jaws Beach? Who is he to decide who geos there and who doesn't? What kind of crap is this and why are we allowing this thug to dictate who can go and come from a public beach?

"But you just gat to know this black people land..."

since when are Bahamians only black?

Block the beach off from everyone. Seems like nobody wants to play nice.

LOL! What an exercise in ignorance. Smells awfully like someone is desperate to keep their name in the press, so they're stalking Fred Smith who is gaining PR for a legitimate cause. Possibly collecting couple dollars from anti-Bacon people. #pathetic

Keod Smith sounds like an idiot....people like him are the scum of this beautiful country which is bringing us down day by day

Wow! Has Keod Smith lost his mind? He needs to educate me on the distinction between a public beach and a beach owned by Black Bahamians. Obviously there is not much going on at the law practice for him and his goons to be out there every day. Then on the other hand who would hire him other than the likes of Nygard.

Does anyone here believes that anything will come of Koed's behaviour. We all know who he acts on behalf of, we know that individual is very well connected and will quickly bring out the marketing machinery. Demonstrating where he has given some athlete or group a couple of dollars (which is good). However, it appears that he believes such payments give him right to destroy the environment with impunity. To request the government to make him so powerful that all...

I will leave that for now.

Mr. Keod Smith believe that educated Bahamians can't see what is agenda is really about. But Bahamians are smarter than he thinks. I will list a few of his hidden agendas. Firstly Mr. Peter Nygard Smith's employer expand his property by dredging the sea bed and it was uncover by the Bahamian people and Nygard was instructed to restore his property to the original size, he than fought against that instructions and lost. secondly he expand his house on the expanded land thirdly none of this was done by government approval. to move attention away from what he has done he levered an attack on his neighbor accusing him of trying to take the Clifton Heritage Park from Bahamians. Keod is allowing Nygard to use him to rage war to Mr. Bacon to move the negative attention away from him for what he has done SHAME ON YOU Keod.

your insecurities are showing again through you anti foriegn rants ,,,,have you not reaped any of the benefits of majority rule ??

yes Koed this is black people land ,however if you and the PLP keep up your anti foriegn campaign , i hope you can find 5 million black tourist a year so we can all eat ..

i was refering to Koed Smiths statement ,of course the Bahamas is Black /white and even Asain bahamians

Koed has posted new pictures on Facebook of the ramp he is building at Jaws Beach under the banner of Save Clifton. Someone please ask him for his permits to do this! and someone please explain to me how building a ramp to facilitate more power boats in Clifton Bay will help "Save Clifton?"

Koed Smith is a stupid racist jackass who got in law degree out of a cereal box!

It's too bad that these areas have to face such conflicts. I always thought about Bahamas as to the dream land but on the other hand I also believe that the people's rights should be respected. I support these people in their march. I was one of them one day. It's because of that day that I want to make an acquisition from the http://www.casesbypelican.com/pelican...">www.casesbypelican.com. It makes me feel safer and more secure on self protection.