Dump Blaze Is Expected To Smoulder For Days 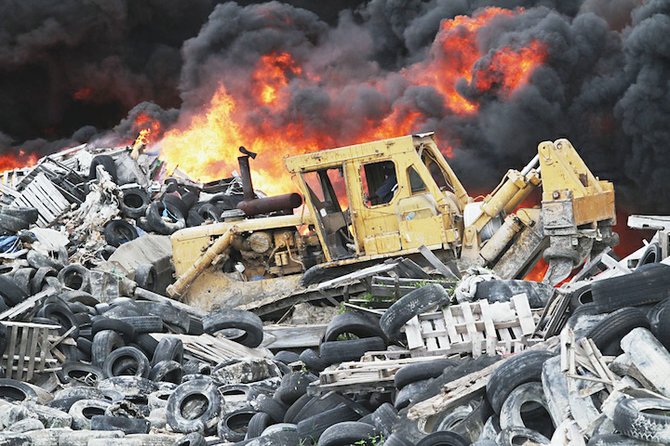 THE Tuesday afternoon blaze at the city dump off the Tonique Williams-Darling Highway has been reduced to a “smouldering phase” but is expected to go on for days according to fire chief Walter Evans.

The fire had sent heavy plumes of black smoke into the sky as flames were fed by thousands of tyres and pallets at the dump.

Supt Evans, director of Fire Services, said the fire is “still going on” but has been greatly minimised and efforts are being made to put it out completely.

“A number of heavy duty tractors, along with water trucks, are being used at the site,” he said.

“There has been some loss. There’s been some utility poles and some power lines that have been lost – along with cable.”

However, Supt Evans said the fire posed no major threat to surrounding communities.

When asked how much longer he expects the fire to burn, he said: “We couldn’t say exactly because it depends. You are dealing with different heats; there are different heats with tyres and so one will take a little bit longer than the other. We will have to monitor to see but it definitely won’t be today or tomorrow.”

The fire is believed to have been sparked sometime around noon, according to Department of Environmental Health Services employees. The exact cause of the fire remains unclear.

Environment Minister Kenred Dorsett was at the scene and said Cabinet is currently considering a proposal that could prove to be the solution to several long-standing city dump issues.

The minister would not go into detail, only offering that when Cabinet approves it, the public will learn “all about the solution.”

He said: “The sooner we move ourselves to where we transform this into what I call a green park, where we mind these landfills ourselves and move the hazardous waste here and get this environment in a manner where it will not subject us to this kind of nonsense, the better.”

The dump has been plagued by recurrent fires for years. The most recent dump fire, not including Tuesday’s, started four months ago in April.

Officials struggled to get a handle on that fire, which smouldered for weeks.

When will Bahamians realize that the PLP and FNM parties are both responsible for so many of the wrongs committed against our society and for the decline of our country? The politicians in these two political parties are owned and controlled by their greedy business cronies who financially support (bribe?) them in exchange for political favours of one kind or another that typically have a very negative impact on our society and country as a whole. For decades now the FNM and PLP alike have wittingly or unwittingly promoted policies aimed at creating a majority underclass of illiterate, unquestioning and undiscerning voters. The unchecked wreckage of our country's finances by both the FNM and PLP has resulted in most Bahamians struggling to meet their basic daily needs against the backdrop of ever rising food and utility costs, a failed educational system and a failing health care system. TRUTH BE TOLD, THE ENTIRE BAHAMAS WILL SOON GO UP IN SMOKE IF BAHAMIANS DO NOT FREE THEMSELVES FROM THE FAILED POLICIES OF THE PLP AND FNM! These two political parties deserve nothing but a quick death....they have together done more harm to our country than the old UBP could or would have ever done!