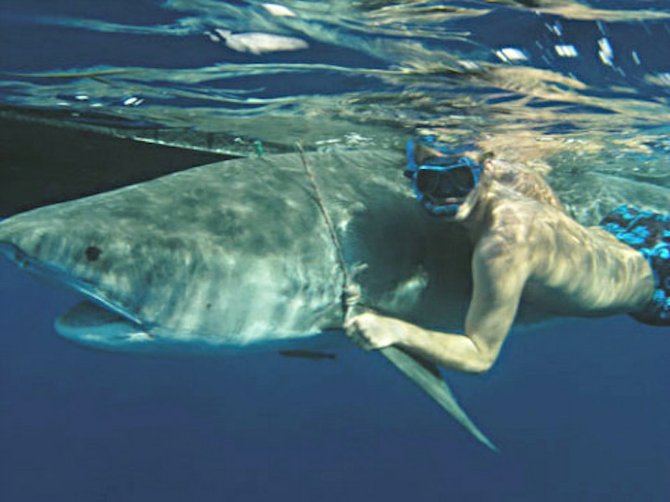 CALLING it an area of “unequalled ecological importance”, the Bimini Biological Field Station Foundation applauded government’s support of the proposed North Bimini Marine Reserve – but also urged decision-makers and developers to pull out all the stops to protect the island’s environment.

The foundation, known locally as the “Sharklab” for its groundbreaking work with the marine predators for which Bimini is a vital habitat, noted that the island’s pristine waters are the centrepiece of local appreciation and tourism appeal.

“In January of this year, the Bimini Biological Field Station Foundation (Sharklab) was honoured to receive the prestigious Cacique Award in the Sustainable Tourism category.

“In winning the Cacique Award, we feel compelled to reiterate what is unanimously understood as the principle centrepiece of Bimini’s tourism product, and that is the majestic, pristine waters surrounding these islands,” wrote Dr Samuel Gruber, Sharklab founder, president and one of the world’s leading authorities on marine life.

The letter is co-signed by Dr Tristan L Guttridge, a BBFSF director and marine biologist who has conducted shark research in the Atlantic and in Australia’s waters.

“Whether it is fishing, diving, boating or any number of wildlife encounters, there is no question that Bimini’s amazing marine ecology is what sustains the local tourism industry.

“While improvements should always be sought for these and any other islands, protecting what has been proven is key to true sustainability for Bimini,” the letter said.

According to the scientists, the organisation is not opposed to development.

It is not, they say, an either-or situation – either the economy or the environment – but rather about forging a way forward that allows both to thrive.

“As the 2013 Cacique Award winner for Sustainable Tourism, the BBFSF would like to strongly support the government’s decision to declare full protection for the North Bimini Marine Reserve.

“The (Reserve) encompasses an area of unequalled ecological importance, and also provides the foundation for the tourism industry that sustains Bimini’s local economy.

“It is truly in the best interest of every business, individual and guest on this island that this Marine Reserve be treated with the prestige it deserves,” the letter said.

Any one want to bet whether or not the Government responds to the 'Cacique Award winning' Sharklab's letter?