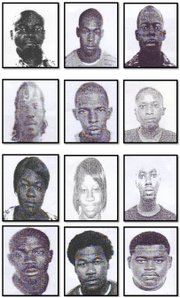 The people wanted for questioning.

POLICE want the public to help them crack a major fraud ring believed to have fleeced thousands of dollars from a prominent financial institution.

Last night, police released several photos of suspects whose identities they are seeking to confirm. It is claimed they defrauded the unnamed New Providence business between June and July of this year, using false IDs.

Only one suspect is named: Leslie Elliot, 28, of Bellot Road.

Elliot is described as being of dark brown complexion, slim build, and standing 5’ 11”.

Anyone with information about the whereabouts of Elliot, or the identity or whereabouts of any of the unnamed suspects, no matter how insignificant the tip may seem, is urged to call police on 919 or crime stoppers anonymously on 328-TIPS (8477) in New Providence or 1-242-300-8476 in the Family Islands.

Can't they just compare the sickness payouts at NIB against employer records?