No Bail For Wrinkle

ANY hopes of bail for former Bahamas Contractor’s Association president Stephen Wrinkle pending his appeal over his conviction for stealing electricity were ended yesterday. 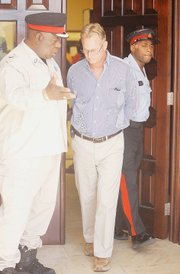 However, he was not the only applicant who was denied bail by Magistrate Derence Rolle-Davis yesterday morning.

Edena Farah, who was convicted and sentenced for her Straw Market scuffle with police officers two years ago, was also denied bail.

The magistrate reasoned that granted bail after sentencing defeated the purpose of their conviction and subsequent sentencing.

With the magistrate denying bail, it means that the 36-year-old tour guide and 61-year-old Eastern Road resident and president of Wrinkle’s Construction and Development will have to continue their remaining 363 days behind bars until their cases are heard before the Court of Appeal where they can apply for bail.

Wrinkle was accused of dishonest consumption of electricity that was claimed to have been committed between February and March of 2011.

Prosecutors alleged that he stole power for the Bayparl Building on Parliament Street which he manages.

From his arraignment in June of 2011 to his conviction in January of this year, Wrinkle had maintained his innocence concerning the allegation.

Farah had faced six charges, each a count of disorderly behaviour, obscene language, resisting arrest, threats of death and two counts of assaulting a police officer, all alleged to have been committed on January 6, 2011.

It was claimed that she committed these acts at the Straw Market during a Segue Tour.

Farah was arraigned on those charges not long after she had filed a complaint to the Complaints and Corruptions unit about an incident with police that had left her injured and on crutches.

Evidence in the trial notes that the incident with police was started when Farah, while conducting her Segue Tours on a one-way road, was warned by officers, one of them a woman officer.

It was claimed that the scuffle and attack on the police was initiated by Farah.

However, Farah denied this. She said the scuffle started when someone she could not identity from their clothing, came up to her and pulled hard on her locks.

During their sentencing on Tuesday, their attorney Jomo Campbell had made mitigation pleas on their behalf and noted that his clients were not beyond reform and custodial sentences were not needed in their cases.

Wrinkle’s punishment from the magistrate of seven years came first as he was sentenced to one year at Her Majesty’s Prison and fined  $1,000. If the fine was not paid within a month’s time, then Wrinkle would receive an additional three months time onto his sentence.

Concerning Farah, Magistrate Rolle-Davis said she would be imprisoned for six months for resisting arrest.

He said that she would serve six months for threatening a police officer with death and two consecutive six-months sentences for assaulting two police officers along with a $175 fine for disorderly behaviour and obscene language.

While Wrinkle appeared to receive the news nonchalantly, having already instructed Mr Campbell to appeal, Farah and her family wept in anguish and outrage.

Their “bail pending appeal” applications were dismissed and they must now wait until their matter is put on the Appeal Court calendar.

Under what circumstances is this magistrate deciding this is too serious an offense to be an non bailable offense? The magistrates decision making process must have quickly eliminated that Comrade Wrinkle would present any risk to the community or God forbid, to BEC? He does not appear to be a flight risk.The magistrate must have been comfortable that it is highly unlikely Comrade Wrinkle will bring harm to anyone, or will not appear for his appeal hearings?

By now, Comrade Wrinkle should done have instructed his appeal counsel to petition the Supreme Court for bail.

The law provides for a Magistrate to have discretion when deciding to grant bail to an offender, but with the negative public opinion and under the circumstances of the case at least an order for Mr. Wrinkle to surrender his passport ......even ordering him to sit in the BEC lobby from opening to closing hours would be a harsh bail condition......yet a more understandable decision than an outright denial of bail. ..........there is a Vendetta element in this matter, made clear from the failure of the Magistrate to order the repayment of $15K to BEC. It is obvious that BEC's energy has no value to the Magistrate, yet he denies bail for a breadwinner and an owner holding responsibilities to a number of employees....The laughable thing is that BEC doesn't care about losing $15K because their energy wastage amounts to hundreds and thousands of dollars on an annual basis.

Thank you Mr photographer for highlighting what i mentioned just yesterday, this big bald head poor excuse for an officer looking like a drag queen , slaps and pushes around little black men and boys right in front of the cameras , but we can clearly see him right here saying to Mr Wrinkle . right this way my good man watch your steps now , come along smartly Sir , but on that same day he is seen poking the young fella , the one accused of shooting the police in pinewood, and holding his head up for the cameras, if one chooses to hold there heads down (especailly after an alleged beating at the hands of the police ) should that not be their right? why does this big SLOPPY drag queen looking officer have to push accused persons head up ,

this how it looks mr bald head sands

It seems that in our court system it is O.K. to allow persons charged with murder but not so in the case of Mr. Wrinkle and the Ms. Farah to be allowed out on bail.

Shame on our Bahamas!

"It seems that in our court system it is O.K. to allow persons charged with murder but not so in the case of Mr. Wrinkle and the Ms. Farah to be allowed out on bail.

Shame on our Bahamas!"

Seriously something wrong with this picture.

We come in defence of Mr. Wrinkle but how much electricity is he accused of theifin' ANSWER $154,000.00 ONE HUNDRED AND FIFTY FOUR THOUSAND DOLLARS. AND over what TIME PERIOD? THREE YEARS..yes he had the illegal hook up for THREE YEARS enough time to think about what he was doing, especially since he was in the press everyday blasting bot PLP and FNM governments. Can BEC recover its revenue? I may be wrong but I don't think the magistrate had the authority to order restoration, because of the $ value, If B.E.C wants to recover they will have to take out a civil matter in the Supreme court.

if the woman made a complaint that the police beat her before then this aint right thats a woman! I'm not going to lie this woman sound more like a victim than a criminal to me and regardless she didn't stab or shoot none of the police so .... as for the scuffle...parliamentarians does carry on almost that bad in parliament i mean i just saying ....now she is wrong for carrying on like so in front of the guests if she was conducting a tour.... but a year in jail wow that's really too much i feel for this woman and her family .......... and the numbers people conducting business as usual wow we need to change the country motto to "mix up like conch salad"

As for Ms. Farah i think she has fair grounds for bail and appeal. It simply doesn't compute that you get beaten by 6 policemen, and allegedly even after being taken to the station more beating and end up with injuries and still get jail time. Her incident happened when the police had downtown on lock. There was at least two shootings, the John Bull robbery, problems with unruly jitney drivers, with school kids crowding downtown after school peddlers allegedly selling drugs to tourists and prostitution. Downtown Nassau, had a black eye for the world to see, maybe two even. The police were given a mandate to clean up downtown and any Bahamian going there was suspect at that time. The police were hot. A number of persons going to and from work and having to pass through the downtown area were accousted by police and some were arrested for loitering while on the bus stop. Once arrested and taken to the station the police tended to throw the book at the suspect and he/she had to spend the next two years back and forth to court to fight for his freedom. And those found guilty did not have an easy fate, they were made examples of. Downtown is less of a police state these days, but wise Bahamians will still avoid going down there unless they have to. If the Farah case is appealed and goes to retrial the outcome may be different.

John - was wondering where you're sourcing your information from? I'm not sure I've read every article about Wrinkle's case, but those I have read don't mention a specific value for the electricity allegedly stolen from BEC. This article above mentions that the "dishonest consumption of electricity" occurred between February and March of last year, not over a period of three years. Where have you read that it occurred over a period of 3 years?