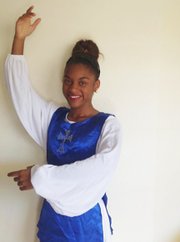 THE day she can no longer move will be the day Julane Robinson stops dancing for God. The young liturgical dancer was inspired to dance at a very young age and intends to continue ministering the word of God through dance in her adulthood.

Julane touched the hearts of attendees during a service recently held at St Ambrose Parish Church. Attendees were impressed with the way the young dancer interpreted the messages in several popular gospels songs and brought them to life through her movements.

“What really pressed upon me was when she danced to the song “Take Me To King”. Her facial expressions alone told the message in the songs. You listen to some of these gospel songs and you do not really know what they mean. That night she really brought the true meaning of the song to light with her performance. It touched me in many ways because someone as young as her age was able to move me,” a church member told Tribune Religion.

Julane who is a 17 year old student at Queen’s College has been dancing for twelve years. The performing arts, whether it is music or dance, has always fascinated her.

“I developed a love for the arts from I was a child and so I began singing and dancing in church from the age of 5. As I got older and realized the affect that it had on people and how much it made me smile to see others smile I was inspired to continue it. My love for the art of music helps me to feel the music more and allows me to be more passionate about the song and put more emotion into the dance. It also brings me great joy to hear people come up to me on a daily basis saying how I minister to them and how proud and moved they are by my performances,” Julane said.

Julane said ministering through dance is very difficult, simple because some people believe dance should not be apart of the worship experience.

Yet no matter how difficult it gets, Julane said she was called to serve God through dance and is determined to bring all glory and honour to him as long as she lives.

“Ministering the word of God in any aspect is not an easy job because certain persons are not as open as others. Liturgical dance in my opinion is one of the hardest ways to minister because there are many traditional persons who do not believe that dance should be a part of the worship experience.

“Over my years of dancing I had the wonderful opportunity of watching some of these people look beyond this belief because of my dancing.

“This is one of the reasons that made me want to continue to dance.

“Ministering through dance is a difficult task, but to me no task is too difficult for those that truly love and want to serve the lord.

“I believe that you should not let difficulties stop you from ministering for the lord because he has done and is doing so much in our lives,”she said.

Though Julane intends to study audiology at the tertiary level after graduating high school this year, she will continue in music and dance as way to spread the word of God.

“What I love most about liturgical dance is the way I can minister to people and bring them closer to God.

“I love hearing persons come up to me and say how I have touched their hearts and how my dances make them feel the presence of God.

“For as long as God is willing to use me in his way I will never stop dancing,” she said.