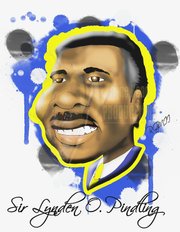 ART BECAME therapy for Renbert Mortimer II after an ordeal ended in the college student being arrested and suspended from school. The 23-year-old, who is the former president of the College of the Bahamas’ Union of Student, was arraigned in magistrates court last year on disorderly conduct charges. The incident left Renbert in a regrettable state, robbing him of confidence and self worth. He turned to art in order to escape depression and feelings of unworthiness.

“Art is not just a thing to do, or optional. I have to draw. It was after an incident last year that I was put on bail and suspended from school. That was my lowest point to date. I felt worthless and my confidence hit bottom, despite being a Christian and knowing God. I needed something more. It was the words of a friend who told me to focus on the things I did before college and the incident and develop them.

“At that time I gave up on art to obtain a masters and a PhD degree in psychology. But I did not really had a sense of purpose pursuing those degrees. Art saved me from depression, low self esteem and helped me assist my parents with the daily cost of living by doing what I love,” Renbert told Tribune Arts. Renbert’s ordeal brought him back to his childhood days when he watched his father, who was an art teacher, paint back drops for their church. His father’s beautiful art work inspired him to do the same and become a much better artist. At the age of 7, Renbert started pencilling cartoons, faces and other concepts. He vividly remembers teachers viewing his work, which he drew in the back of class work books, and hanging them on the walls in the classroom. In the latter part of his high school years, Renbert began profiting from his drawings through a company he established called Waynedhead Production. It specialises in portrait drawing and caricatures, which show the features of an image in an exaggerated form. He recently started a Facebook initiative called Wayned, where he drew over 300 faces including families, couples, youth leaders and local figures.

“I did not always believe in my art or better, my style of drawing. I was discouraged for sometime with my style, as most Bahamians do not understand caricatures. After drawing many people, the complaints - “My nose aint that big” or “ that does not look like me” - made me give up on caricatures and draw more portrait styles pictures, which I have grown to hate because it is not really a caricature. Sadly, portraits are the only style most Bahamian appreciate. Now, some choose to be Wayned. Today, my parents, friends, Facebook fans and the encouraging words of seasoned artist, Jamaal Rolle have rekindled my interest in art and graphic design,” the young artist said. Caricatures have become one of Renbert’s favourite things to draw because it gives him freedom.

“When cartooning, I enjoy the freedom and use of imagination. Not to insult any artist, but although I can do portraits and still life, I dislike it. It is boring, straight forward and I often cannot maintain focus. However, when cartooning or doing a caricature, I can reference cartoons I have watched everyday. I can marry my animated mind, with realities and create something that is whimsical, funny and truly Bahamian,” he said. Though he has not decided on whether or not he will pursue art as a career, he intends to learn as much as he can. He also hopes his company becomes a training ground for young artists.

“I am still learning my style and choosing the path I want to do. I want to learn more about being a concept artist, illustrator, cartoonist and even an animator. But for right now, I am working to support this dream. One day, I want my company to be a training ground for young cartoonist who want to pursue art as a career. The industry of comic books and even successful shows like Family Guy show the market is open, and I believe it is time to see the Bahamian flare in modern animation. Even if I do not have the money or time to receive formal training, I will keep on pushing and enhancing my skills locally and expose myself to harder drawings and concepts,” he said. Renbert has drawn caricatures of many public figures, including Stef of Air Bush Junkies, celebrity artist Jamaal Rolle, the late Sir Lynden Pindling, Steve Harvey, Charles Carter, Boomer G softball personality, Keva Bethel, the late Paul Adderley, Myles Munroe, Erin Ferguson, Demetrius the Karaoke King, Phil Smith, Ms Daisy and YouTube star DeShawn Raw- Supa Hot.

So happy for him. It sucks what happened before, but this is his path - one that he admires and loves. There is no question that he will go far. I believe in him

Undoubtedly art is the best subject to tell ones opinion in a clear manner. http://www.dissertationworks.co.uk/bu...">buy dissertation | Dissertation Works

Art is not just one thing. To share experiences and ideas to create, communicate well. Enjoy the freedom and the use of imagination. Did not insult any artist. Who wants to pursue art as a career. http://www.topwatchbase.com/rolex-sea...">Green Ceramic Bezel and Dial

For judging your self and making it perfect, you should be confident. I am a teacher and have seen many students with less confidence. Usually i have found them confused especially when they are assigned any writing task. I have found them mostly http://www.essayace.co.uk/write-my-es...">ask someone to write an essay and in end they are left blank and helpless.

Art is not only a certain something. To share encounters and thoughts to make, convey well. Appreciate the flexibility and the utilization of creative energy http://www.writemyessaynow.co.uk/">pay someone write an essay for me. Did not affront any craftsman. Who needs to seek after workmanship as a vocation?

Art is the very best field for male and female to doing a job, I always want this will become an artist but I have become https://www.hndassignments.com/">UK HND Assignments Writer due to my tough schedule of life. Because I was very busy in my life that's why I don't select this field of Art.

An art can define 100 words. Again proving that passion is the one which you have to work on. An amazing blog and thanks for sharing it.

Indeed, it's a fact that one will fulfill their goal if they work on it constantly without loosing hope and avoiding criticism. This blog is the best example for this. Hence, I will implement this in my life too and I feel thankful I am going such an inspiring blog. Keep on posting and inspiring us.