JUST 10 days into the New Year and police say they are already concerned about the number of armed robberies in the capital. 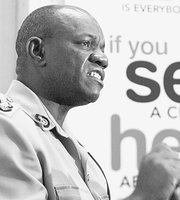 While police remained tight lipped on just how many armed robberies have occurred so far, Superintendent Stephen Dean said “enough to cause concern”.

“The public said before that we have not informed them of these instances in the past so we are taking a more proactive approach this year. These armed robberies are sporadic but most of them have occurred in the Carmichael Road and south eastern areas,” he said.

Supt Dean is encouraging members of the public to work with police and report crimes to reduce and possibly eliminate crime.

Police also removed 480 weapons off the streets and 6,516 rounds of ammunition.