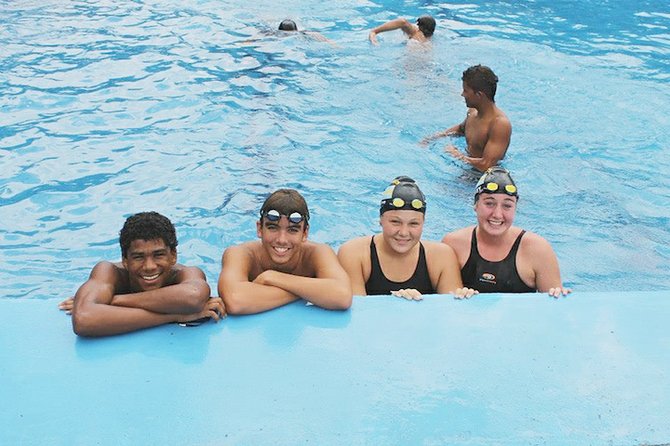 TEAM Bahamas produced a total of 20 medals and an eighth place finish at the 28th CCCAN Swimming Championships in San Jose, Costa Rica.

The 21-member team collected six gold, seven silver, seven bronze and finished with a total of 202 points over the five-day meet.

Venezuela was the overall winner with 1,067 points, Costa Rica was second with 711, Guatemala was third with 497, Honduras fourth with 473 and Aruba fifth with 450.

Trinidad and Tobago topped the teams in the English- speaking Caribbean with 443 points, followed by Barbados in seventh with 362.

Trinidad and Tobago was second with 16 gold, seven silver and 11 bronze for a total of 34.

Joanna Evans was one of the stars for Team Bahamas as she totalled four medals in the Girls 15-17 division.

Laura Morley also highlighted the Girls 15-17 division with three medals. She added to her medal count with a silver in the 50m breast on day four, in a time of 35.64.

A pair of first-timers at the CCCAN Championships were also able to win multiple medals in their meet debut.

The previous mark stood for 13 years. She also added a bronze in the 50m breast (37.23) on the final day of competition.

T’Auren Moss highlighted the final day of competition for the Bahamas with a gold in the 50M fly in a time of 25.81.

Gershwin Greene was the first medal winner for Team Bahamas on the male side with a silver medal in the 13-14 50m free in 25.27.

Fernander and Jared Fitzgerald, who took bronze in 4:20.18.