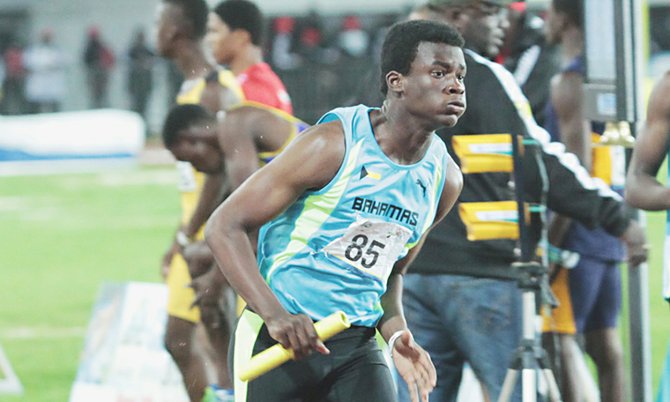 THERE were no medal-winning events for Team Bahamas at the 8th IAAF World Youth Athletics Championships in Donetsk, Ukraine. However, a number of athletes recorded personal bests in a series of spirited performances against the top junior athletes in the world.

Team Bahamas concluded competition yesterday with a fifth place finish in the men’s sprint medley, the final event of the meet.

The team of Keannu Pennerman, Ian Kerr, Kinard Rolle and Henri Deluze finished fifth in a season’s best time of 1:52.97 seconds in the race which includes two 100m, one 200m and one 400m run.

Jamaica took first place in a World Youth leading time of 1:49.23.Also on day five, Denzel Pratt finished 11th in the javelin final with a throw of 64.20 metres. In the preliminary round, Pratt set a new personal best with a throw of 70.88m.

The top individual performance for the Bahamas came on day four from high jumper Laquan Nairn who just missed a spot on the medal podium due to a higher number of knockdowns.

Nairn jumped a personal best of 2.16m, which he cleared on his second attempt to enter a three-way tie with Christoff Bryan of Jamaica and Oleksandr Barannikov of the Ukraine.

Nairn eventually finished fifth with six knockdowns, while Barannikov had five and Bryan claimed the gold medal with three.

Sanghyeok Woo of Korea took gold with a leap of 2.20m, followed by Jiaxu Bai of China.

“At the end of the day I came fifth out of a field of 45 of the best jumpers from around the world so I feel great about the performance,” Nairn said.

“I was able to set a new PR which was huge for me. The competition was great throughout and I did everything my coach told me to do and by the grace of God I was able to go out there and jump with confidence.”

In the 400m, Janeko Cartwright reached the semifinal and finished third in semifinal two in a personal best time of 47.23.

In the prelims, he received an automatic qualification when he finished first in heat seven in a then personal best time of 47.25, the seventh fastest time headed into the semifinal.

Kinard Rolle finished sixth in heat five with a time of 59.51, 45th overall.

Martin Manley of Jamaica took gold in the event in 45.89, a World Youth leading time.

Jenae Ambrose finished seventh in semifinal one of the girls’ 100m in 12.02, 19th overall.

In the boys’ 100m, Kerr and Pennermann failed to advance, placed in some of the fastest heats of the first round.

In the other, Kerr finished third in heat three in 11.04, behind Mo Youxe of China, the second overall qualifier in 10.64 and Jeongtae Lee who qualified with a 10.97.

Loushanya Neymour also ran a personal best time, and finished fifth in heat three of the prelims in 25.08, 34th overall.

Cartwright was unable to finish his semifinal due to injury.

Cartwright qualified with the eighth fastest time overall when he finished first in heat six in 21.57.

Kerr finished second in heat three in 21.68 to advance.

Xavier Coakley finished sixth in semifinal one of the 400mH in 53.78s, 19th overall. He reached an automatic qualification with a second place finish in heat one of the preliminaries in 54.11.

Coakley also finished sixth in the third semifinal of the 100m hurdles in 13.93.

In the long jump, Nairn’s best jump of 7.33m just missed the finals qualifying mark of 7.35m. He scratched on his first attempt, landed his recorded mark on the second and 7.31m on his final jump to finish 13th overall, and ninth in flight B.

Competing in the boys’ discus, Drexel Maycock failed to record a mark in Group A and bowed out in the qualifying round.

The team was coached by Dianne Woodside, who was assisted by Stephen Murray, Patrick Adderley, Lavern Eve and James Rolle.

Woodside, who previously coached a World Youth team at the second edition of the championships in 2001 in Debrecen, Hungary, said the Bahamas has continued to see an improvement in its performances since the inception of the biannual championships in Bydgoszcz, Poland, in 1999.

Nivea Smith broke the ice when she won a bronze medal in the women’s 200 in 2007 in Ostrava, Czech Republic.

According to BAAA public relations officer Tonique Williams-Darling, the athletes will also have the opportunity to represent the Bahamas at the Junior Pan-American Games in Lima, Peru, August 2-4.