Tough Call: Exploring The History Of Our Ancient Bahamas 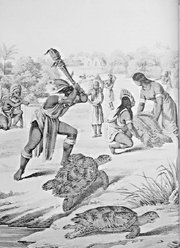 ON Facebook recently, someone posted an early map of the Bahama Islands with a few references to Lucayan place names, which generated a lot of interest. In response I posted a map with all the surviving Lucayan names (and their translations).

That map was created from annotations by Dr Julian Granberry, which accompanied his 1991 article on Lucayan Toponyms published in the Bahamas Historical Society Journal. Granberry is a linguistic archaeologist who has produced such esoteric books as A Lexicon of Modern Mohegan and Linguistic and Cultural Origins of the Calusa.

One of his better known works – The Americas that Might Have Been (published in 2005) – answers the hypothetical question: What would the Americas be like today—politically, economically, culturally—if Columbus and the Europeans had never found them, and how would American peoples interact with the world’s other societies?

In the Bahamas he is best known for producing one of the first modern surveys of Bahamian archaeology. That was in 1955 for his master’s thesis at the University of Florida. And in the early 1980s, he trained and helped guide the activities of the short-lived Bahamas Archaeology Team, in which this writer was involved.

The BATs, as they were known, undertook several useful investigations, including the survey of a now-demolished loyalist plantation at Gambier called Tusculum. Under Granberry’s tutelage, the BATs also found the first recorded evidence of Lucayan settlement on New Providence.

In his 2004 book Languages of the Pre-Columbian Antilles (in conjunction with the late archaeologist Gary Vescelius), Granberry notes that when Columbus landed in the Bahamas in 1492 there were some 3,000 native Indian groups living in the Americas.

But the only Indians that Columbus himself saw were the Tainos of the Caribbean – including the Bahamian Lucayans – a regional society that the Europeans completely destroyed in a few short years.

Although Columbus and his brothers were men of their times, the brutal subjugation of Taino societies really began in 1502, under the direction of Nicolas de Ovando, the Spanish governor of Hispaniola. Within two decades, they ceased to exist as a separate population due to forced labour, warfare, disease, emigration and out marriage.

And the whole regional culture officially expired in 1797, when the British deported the last independent group of Indians from St Vincent to Central America. So a description of the first inhabitants of the Caribbean has to rely on written accounts from the contact period together with archaeological evidence and linguistic analysis.

One of the big questions is their origin – where did these people come from and how did they migrate through the islands prior to European contact?

They were an offshoot of the Arawak tribes that migrated down the Orinoco from the central Amazon and entered the Caribbean about 500 BC.

In his book, Granberry notes that in pre-Columbian times, Arawakan languages were spoken from the northern Bahamas all the way to Bolivia, and from the Guianas to the foothills of the Peruvian Andes.

But he also applies his linguistic expertise to the region’s more distant past. Before the Tainos, parts of the Caribbean had been settled by stone-age tribes from both Central and South America – people who did not make pottery.

“At some time prior to 3,000BC, a Tolan-speaking people from the Belize-Honduras coastal region discovered and settled the then-uninhabited Greater Antilles,” he wrote.

Linguistic evidence suggests that the Tolan speakers were pushed into an isolated pocket of Hispaniola where they became known as the Ciguayo. And the Waroid population was pushed to the western tip of Cuba by the Tainos and became known as the Guanahatabey. Both remnants survived into historical times.

A few decades before Columbus arrived, another Indian group called the Caribs began expanding into the Lesser Antilles from the Guianas, a territory which they shared with the Arawaks. They apparently arrived in small war parties and merged with the existing population. But this is the group for whom the entire region is named.

These people were encountered by Columbus in Guadeloupe on his second voyage in 1493. More warlike than the Taino, they used parts of human bodies in rituals, giving rise to the belief that they were cannibals.

The last speaker of the Island Carib language died on Dominica about 1920, Granberry says. On St Vincent, the Indians became known as Black Caribs by intermarrying with Africans, and were eventually removed to British Honduras (now called Belize). Today there are almost 75,000 speakers of the Carib’s Arawak creole in Belize.

For an indication of the complexity of this subject, here is Dr Granberry’s description of how the book came to be published: “The authors began, independently of each other, to examine both the surviving Taino...and non-Taino...lexicons and the native place-names of the Antilles.

“Vescelius in particular devoted an extraordinary amount of time and research over a period of many years to these endeavours, and the bulk of the work reported in this volume on that topic is attributable to his rigorous long-term study.

In the late 1970s, Granberry and Vescalius began to collaborate and, after Vescelius’ untimely death some years later, Granberry, completed the joint venture by publishing Languages of the Pre-Columbian Antilles.

The Bahamian archipelago was probably uninhabited until the arrival of the Tainos. The Indians Columbus met here are known as Lucayan Tainos (luk-ku cairi means ‘island people’) who migrated from both northwestern Hispaniola and northeastern Cuba into the southern Bahamas about the 7th century AD. They appear to have settled the entire archipelago by the 12th century AD.

In reconstructing the extinct Taino language (tai-no, by the way, means “good people”), Granberry presents linguistic evidence for several interesting suggestions. For example, listing the 39 surviving aboriginal island names in the Lucayan archipelago he points out that “in-na-wa” (or Inagua) meant “small eastern land”, implying that it was settled from Cuba and not Hispaniola.

The word ‘ba-ha-ma’ (the Lucayan name for Grand Bahama) meant “large upper middle land”. So our national name is apparently not a derivation from the Spanish for “shallow sea” as most believe. And in fact, early European explorers referred to the Gulf Stream between Bimini and Florida as the Bahama Channel.

Granberry identifies and deconstructs some 40 surviving Lucayan place names to determine the step by step settlement of the Bahama Islands.

For students of the European conquest of the West Indies after 1492, it is interesting to note that the region’s first re-peopling was undertaken by the Taino Indians themselves – who almost totally exterminated the original inhabitants.

But the Spanish intervention was far swifter. The entire surviving population of the Bahamas, for example, (an estimated 40,000 people) was shipped to Hispaniola between 1509 and 1511. And our archipelago remained uninhabited until the coming of the Eleutherian Adventurers in the mid-17th century.

During the 1500s as many as 40 per cent of the Spanish colonists took Indian wives. And by 1540 Africans had almost completely replaced the Indians as slaves, eventually giving rise to the mixed societies of most Caribbean nations today.

• What do you think? Send comments to larry@tribunemedia.net or visit www.bahamapundit.com.

Thank you very much for this. It is much appreciated and contains information that I did not know.

This is very interesting and educative. History fascinates me and I think there are still alot of things to be discovered. http://incaltamintecopii.tumblr.com/">!