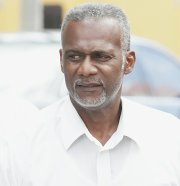 CHRISTIAN People’s Movement leader Stephen Serrette will have to be electronically monitored as a condition of the $10,000 bail granted him by a judge yesterday ahead of his trial on a charge of sexually assaulting two under age boys.

The bond, which was not objected to by the prosecution, was granted to the 51-year-old Turnquest Avenue resident by Justice Vera Watkins who warned the accused not to go near or interfere with the complainants in the case.

Justice Watkins also stipulated that Serrette had to report to the Cable Beach police station twice a week, surrender all of his travel documents to the court, and stay clear of the complainants in the case.

Failure to abide by these conditions will result in his bail being revoked.

Serrette was arraigned in Magistrate’s Court on May 27 before Chief Magistrate Roger Gomez in connection with allegations that on Wednesday, November 21, 2012, he had sex with the elder of the two boys.

The second charge accuses him of having sex with the younger boy at some time between 2011 and 2012.

The third charge claims the party leader purposely allowed the two boys to have sex with each other.

Serrette was not required to enter a plea in the matter, but his lawyer Ramona Farquharson-Seymour said he maintains his innocence on all counts.

A Voluntary Bill of Indictment will be drafted to fast track the case to the Supreme Court. That presentation is scheduled for July 16. He was remanded to Her Majesty’s Prison as he was ineligible for bail from the Magistrate’s Court. However, he was told of his right to apply to the Supreme Court for a bond.

Yesterday, the 51-year-old was escorted to court with his parents steps ahead of him in support.

Before Justice Watkins, his attorney, Mrs Farquharson-Seymour made the application on behalf of her client.

The judge questioned Serrette’s immigration status due to unfamiliarity with his surname.

The attorney claimed that Serrette was Bahamian, having been born in Eleuthera before 1973 and his parents were present to vouch for him.

Justice Watkins asked for a passport, reasoning that it is customary in bail proceedings for the court to request proof because “the first thing that comes to mind is if he’s a flight risk.”

“Does he have a passport?” the judge then asked.

However, the lawyer submitted that considering her client’s position in society and him not having any antecedents, reporting conditions would be more appropriate.

Justice Watkins differed on that point, noting that an electronic monitoring device would assist the court, in this case, about the whereabouts of the accused so as to ensure that there was no interference with the complainants in the case.

In the end, Justice Watkins granted a bond and set it at $10,000 on condition that he has two suretors post his bail; he reports to the Cable Beach police station on Mondays and Thursdays on or before 6pm; he surrenders all travel documents to the court, and does not interfere with the boys.

Failure to abide by these conditions will result in the court revoking bail and remanding Serrette back to Her Majesty’s Prison.

Mrs Farquharson-Seymour asked the court if it could reduce the bond to $9,500 to allow his parents, who had job letters on hand, to be able to meet bail instead of having to put up land papers.

However, Justice Watkins said that the bond would not change and that Serrette would have to “find two suretors that can qualify.”

He is remanded in custody until his bail is posted.

It's the softer gentler PLP way...remember the backlash saying the punishments and guidelines laid out by the FNM were too tough and they'd be goin' soft!!

Welcome to the fallout...

"The judge questioned Serrette's immigration status due to unfamiliarity with his surname". Seriously? Lord knows I better not ever have to go to court because with my Sicilian names I'll have to prove I'm a sixth generation Bahamian. Can't forget been loudly asked "You is a Bahamian?" when I went to apply for a police record to travel a few years back. This in the crowded reception of the Thompson Blvd. office. Ever heard the collective 'suck teet' of about eighty people?

Police force works HARD investigate, hunt down, and capture most criminals, then the courts work HARD to find reasons to let them out on bail. This man's wife will probably let him back into the home around these boys and then it begins....... all over again.

Have we all forgotten about the golden rule innocent until proven guilty. We have already charge this man before finding out if he is actually guilty. His wife the liar lawyer who was found guilty of stealing from lots of innocent people for many years all of a sudden accuse her husband of molestation after living with him enjoying the money and fame and owning a couple of restaurants for many years. I can see him being accuse for having too many woman on that ugly wife he had but not molestation of kids. (Bullshit) This man stood by his wife when she was down locked up and raped while in jail,He was on TV asking everyone to help him get his wife out of jail and this is pay back because she was the one who landed in jail not him. Bahamians let's not be stupid, Remember she is or was a lawyer why did she not do anything about it before now? He is known to be a womanizer not boys. That's my thoughts and I am sticking to it.