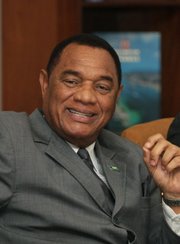 She was speaking yesterday on the first day of “The Bahamas At 40” independence conference hosted by the College of the Bahamas, which featured several speakers discussing a variety of national issues.

Dr Bethel, now a COB assistant professor, was among the panellists at the conference, and presented, “Pricing the Dream, the Economics of Junaknoo”.

She outlined the costs and revenues of the yearly festival, estimating that the government spends as much as $1.7 million on Junkanoo – which has been losing money over the past few years.

She ended her piece with a quote from Prime Minister Perry Christie, who had said in the House of Assembly: “We begin, through public and private sector partnerships, work on the development of a major, week-long national cultural festival oriented to the start of the Lenten season. This will mark the start of the Bahamian Carnival or Mardi Gras.”

Mr Christie added that $1 million will be allocated to the initiative.

When asked about the planned festival by a conference attendee, Dr Bethel outlined three reasons why she believes it might not be as successful as the government is hoping.

“The Bahamas is a Protestant country. We don’t celebrate Mardi Gras,” she said. “The average person in the street who was not raised Anglican or Catholic only just found out in the last three years what Lent was.”

The second reason, she said, is that the plan doesn’t make sense as anyone seeking a Mardi Gras celebration will be likely want to go the more-established and well-known festival in the United States.

Lastly, she explained, the majority of persons involved in Junkanoo are on their “down time” during that time of year and usually visit the Trinidad, Brazil, or New Orleans carnival.

And, Dr Bethel continued, even Caribbean countries who have a tradition of Mardi Gras “do not attempt to set up tourism-oriented carnivals to compete with Trinidad.”

Also presenting yesterday at the conference was COB associate professor Anne Lawlor whose presentation was entitled, “Roots/Routes of Nation Language: From West African to the Bahamas”.

The presentation focused on the origin of Bahamian dialect and how the migration of West African slaves to the Bahamas influenced the language.

She said it is “totally incorrect” to refer to it as a dialect of the English language, because that doesn’t take into consideration its African heritage.