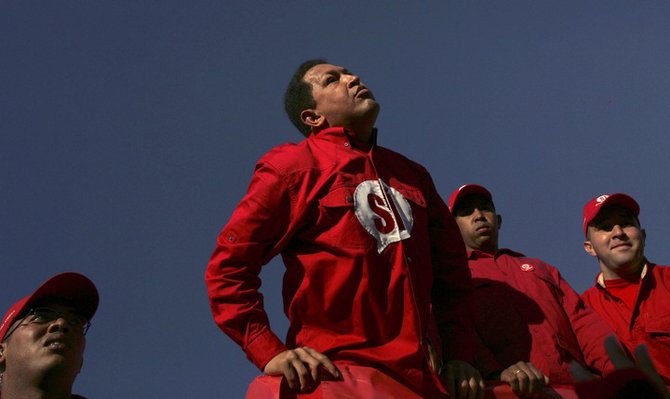 A self-described "subversive," Chavez fashioned himself after the 19th Century independence leader Simon Bolivar and renamed his country the Bolivarian Republic of Venezuela.

He called himself a "humble soldier" in a battle for socialism and against U.S. hegemony. He thrived on confrontation with Washington and his political opponents at home, and used those conflicts to rally his followers.

Almost the only adversary it seemed he couldn't beat was cancer.

During more than 14 years in office, his leftist politics and grandiose style polarized Venezuelans. The barrel-chested leader electrified crowds with his booming voice, and won admiration among the poor with government social programs and a folksy, nationalistic style.

His opponents seethed at the larger-than-life character who demonized them on television and ordered the expropriation of farms and businesses. Many in the middle class cringed at his bombast and complained about rising crime, soaring inflation and government economic controls.

Before his struggle with cancer, he appeared on television almost daily, frequently speaking for hours and breaking into song or philosophical discourse. He often wore the bright red of his United Socialist Party of Venezuela, or the fatigues and red beret of his army days. He had donned the same uniform in 1992 while leading an ill-fated coup attempt that first landed him in jail and then launched his political career.

The rest of the world watched as the country with the world's biggest proven oil reserves took a turn to the left under its unconventional leader, who considered himself above all else a revolutionary.

"I'm still a subversive," the president told The Associated Press in a 2007 interview, recalling his days as a rebel soldier. "I think the entire world has to be subverted."

Chavez was a master communicator and savvy political strategist, and managed to turn his struggle against cancer into a rallying cry, until the illness finally defeated him.

He died Tuesday in Caracas at 4:25 local time after his prolonged illness.

From the start, Chavez billed himself as the heir of Simon Bolivar, who led much of South America to independence. He often spoke beneath a portrait of Bolivar and presented replicas of the liberator's sword to allies. He built a soaring mausoleum in Caracas to house the remains of "El Libertador."

Chavez also was inspired by his mentor Fidel Castro and took on the Cuban leader's role as Washington's chief antagonist in the Western Hemisphere after the ailing Castro turned over the presidency to his brother Raul in 2006. Like Castro, Chavez vilified U.S.-style capitalism while forming alliances throughout Latin America and with distant powers such as Russia, China and Iran.

Supporters eagerly raised Chavez to the pantheon of revolutionary legends ranging from Castro to Argentine-born rebel Ernesto "Che" Guevara. Chavez nurtured that cult of personality, and even as he stayed out of sight for long stretches fighting cancer, his out-sized image appeared on buildings and billboard throughout Venezuela. The airwaves boomed with his baritone mantra: "I am a nation." Supporters carried posters and wore masks of his eyes, chanting, "I am Chavez."

In the battles Chavez waged at home and abroad, he captivated his base by championing his country's poor.

A true advocate for the poor. A true people's hero. Rest in Peace President Chavez.