A MAN convicted in the Supreme Court of attempting to sexually assault an 11-year-old girl during a home invasion was sentenced to 15 years in prison yesterday. 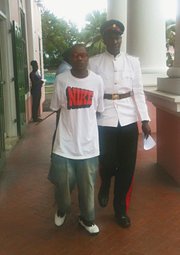 Christopher Rolle, 25, who was unanimously convicted on charges of burglary, causing grievous harm and attempted unlawful sexual intercourse, was told by Justice Indra Charles that his sentence would run from the date of his remand, which was in June 2011.

Rolle was accused of the April 13, 2011 burglary of a home where an 11-year-old girl was physically and nearly sexually assaulted.

According to evidence in the case, the 11-year-old girl was asleep in her room when she was wakened by a sound. She thought it was her mother.

However, a man known to her tried forcing himself on her and a struggle followed when she resisted his advances.

She was choked, punched and had her head beaten against the floor and the tip of her tongue was almost severed with a knife.

The girl was in hospital for a month after the incident.

Rolle denied the allegations and maintained that he was not the one who had committed the crimes.

However, he was convicted and in yesterday’s proceedings, Justice Indra Charles sentenced him to five years each for burglary and causing grievous harm.

For the charge of attempted unlawful sexual intercourse, she sentenced him to 15 years in prison.

The judge said that the sentences were to run concurrently and were to begin from the date of his remand.