Tribute To A Mother's Love 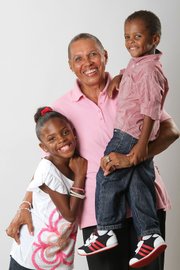 Andrea Sweeting and her grandchildren.

THERE ARE no cards, gifts or material merchandise that can fully express the love a child has for their mother, but Mother’s Day provides an occasion to honour mother’s in the best way possible. Several women share their experiences with Tribune Woman.

Her mom passed away some years ago, but for Andrea Sweeting, Sister Sister Breast Cancer Support Group president, the values she was taught as a child have been instilled in her very own children. “What has given me the most joy as a mother is to know that my children can stand on their own. The fact that they have completed school and they are now on their own, achieving their goals, is a great feeling and it is very satisfying as a parent,” said Ms Sweeting. Ms Sweeting encouraged next generation mothers to love and nurture their children. “Let them know they are cherished and that not everything out there is for them. Teach them that there are things out there that some people have, and they might not have,” said Ms Sweeting. Rowena Poitier, Bahamas Artists Movement (BAM) president and artistic director said she has been blessed to have two mothers. “I am adopted. I was adopted by my aunt (Annette Poitier), but my biological mother (Marina Bethel) is still in my life. She taught me selflessness and she made sure she did whatever it took to make sure that I had the best,” said Ms Poitier.

“As a child, my (adopted) mother taught me how to love fearlessly and unconditionally to everyone. She would encourage me to talk to people and know that everyone has a story. That was very valuable information for me and to this day it sticks with me; to know that everyone has a story and to help them on their journey.” She said they both mean everything to her. “They are both just strong, amazing women and I am lucky if I am half the woman they are,” said Ms Poitier. Bahamian author Betty Joe Cooper, said her mother Gloria Mae Smith was a single parent working two jobs. She said her mother did it all for her and her siblings. Being independent is one of the main things she said she has learned from her mother.

“She was a provider and a strong leader. She means the world to me and I cannot imagine not having my mother in my life. She’s now a diabetic and recently she has lost a lot of weight, maybe because of dealing with the pressure of loosing my two bothers that passed away some years ago,” said Ms Cooper. Apart from her husband and daughter (Shanoon Miller), Ms Cooper said her mother is the most important person in her life. “At first it was tough for me becoming a mother myself, because I had my daughter at a young age. I didn’t understand what parenting was about, but I now know that one of the most bravest things a woman can do is become a parent. It is a reason for her being here and she is a part of me. She is my only child and she is truly a blessing for me. We have some really good moments together and family is everything to me,” said Ms Cooper. Media consultant Inderia Saunders called her mother Brenda Saunders her support system.

“She is the person who grounds and uplifts me at the same time. She knows no other way to feel about me, but to love me. Just the other day I was thinking about what is unconditional love. I don’t have any children, so I just thought about the love that my mother has for me and she doesn’t love me because of who I am, she loves me because she knows no other way to feel towards me, and for that I thank her,” said Ms Saunders. Ms Saunders said her mother has been in her life and in her corner no matter what. The compassion and kindness she learned from her mother has taken her places all around the world, she said.

“She taught me values that will stay with me even when I’m a mother. In fact, I look forward to the time when I am 90 years old in a rocking chair, telling my grandchildren the old wives tales that kept me in line as a child. ‘Don’t point at graveyards or your finger will drop off,’ which is simply saying respect the dead. Be nice, you never know where it can lead,” said Ms Saunders. Bahamian film producer Moya Thompson said even though her mother may kick up a fuss at times, in the end she knows for a fact that her mom is someone who she can turn to for anything, someone who consistently has her back.

“One of the things I credit my mother for is the way she simply took time with me from a very young age. Growing up, my mother would teach me and my brother bible scriptures, each week we had to learn a new one. She also made sure to pray with us regularly. My mom was a hard worker and so growing up, my brother and I had household chores and responsibilities from a young age. It was my job to dust and to sweep every Saturday. I was a sickly child growing up because I suffered from asthma, so my mother had to stay up many late nights with me and sit with me through numerous hospital visits when I would have attacks,” said Ms Thompson. Ms Thompson said her mother is the epitome of a strong woman and has taught her how to take care of herself and to be self sufficient.

I really love this article and the subject also. My mother is so special for me and yes she taught me values and is her merit for making me such a beautiful person, taking into account that I'm very modest but she is perfect for me. You have writing such a good article. Many congratulations! http://despreplatfus.tumblr.com/">Thank you very much for this interesting and beautiful article.

You left me speechless because this is one of the most beautiful and touching article I've ever read. We also need every single day to bring a tribute to our mothers for their devotion and big love. I love very much my mother too and I appreciated her for everything she has done for me. http://romanandradamaria.wix.com/supl...">Thank you and congratulations for this article!

Indeed, a mother must make many sacrifices for her family. Once you are used to work, it is a little difficult to stay at home more than one month. But in time you will get used with your situation. Also, many mothers, after they end their maternity leave, they want to change their workplace or career. Some of them resort to specialized recruitment companies, like the one at http://aptitudeanalytics.com/pre-empl...">http://aptitudeanalytics.com/pre-empl... and give many tests to find out at what they are good. Finding a job is much easier in this way because many companies search their new employees at these recruitment agencies.

Such occasions are so special because these help people express their emotion to their loved ones in a beautiful manner. But instead of buying something for your mother you should consider surprising her with fake newspaper which is all about her, there are companies around like Personal Headlines which offers such http://personalheadlines.com">personalized newspaper Arlington area.

For some people, having a family, meaning a spouse and children, is the best gift that God could give to them. There are persons who struggle to keep their family together, but in these situations, the best solution is to resort to a professional, like the one from http://www.associated-counseling.com/">http://www.associated-counseling.com/ to advise them how to get over a certain problem.

It is a wonderful feeling to have a family and to feel loved by them. But, in reality, some couples get separated because they don't get along anymore. In this situation and if children are involved, a professional divorce attorney will always take into consideration this aspect and he will try to do what is best for the children. If there are parents who really think about their children, then they should find such an attorney, like the one from http://binehamgillen.com/">http://binehamgillen.com and start the divorce trial as soon as possible.

Marriage is an amazing journey. There are families who really cherish very much each family member. Also, they adore when all the family members gather together, but sometimes is quite difficult to organize a family reunion. But using the services of http://reunionbusiness.com/admin/entr...">http://reunionbusiness.com/admin/entr... will guarantee them a perfect event.