Dj Of The Week: Dj Redz 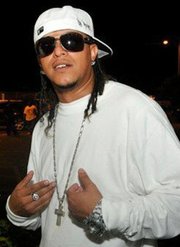 AFTER graduating from college in 2004, Reinaldo “DJ RedZ” Adderley said he took on deejaying as a hobby. Now, music is apart of his every day life. What keeps him going as far as his career goes is feeding off a crowd’s vibrant energy. DJ RedZ said he aims to please whomever he is playing for, be it one person or a thousand people.

“Whoever is partying when I am playing, they are going to have fun regardless. With music, there are a lot of guys I came up under like Dion Da Butcha, the Mighty Pencil and even the likes of Xtra Large. Internationally, I got my style and inspiration from watching people like DJ Jazzy Jeff,” said DJ RedZ. He said he considers himself to be a turn table deejay. DJ RedZ said the scratching and tricks when playing allows him to be creative on the spot. “I take bits from songs and pretty much tell a story with the music,” said DJ RedZ. Before anyone knew him as DJ RedZ, the deejay said he gave himself the name “DJ Hypnotic,” a name that did not stick with him for too long. “Being around Special K and Jatonde, they was like no you’re DJ RedZ. It was originally spelt ‘Reds’ until I found out there were a bunch of other ones, so I changed it to RedZ with a capital Z; I am very specific with it,” he said. With each experience, DJ RedZ said it turns out to be a memorable one because he doesn’t get the same crowd all the time.

“It is always something different, the crowd is never the same. But what stands out right now as my most memorable, would have to be a Bahamian pre party during Best of the Best weekend in Miami in 2010,” he said. The deejay said he has also played in South Florida, Texas and Oklahoma.

During the recent Guinness Talent Show concert, DJ RedZ was on the set when it began to rain. He held his ground and kept the music running for the crowd.

“As long as people are having fun, I will play and I will be there. There was also a similar situation at a Black Out party at Fort Charlotte. It was pouring rain and I was dripping wet under the canvas, and I was still playing. People refused to go home and they stayed there to party, so the rain don’t stop no show,” he said.  As long as an aspiring deejay stays focused and tries to come up with their own style, they will make it, said the deejay.

He said deejaying is an opportunity for deejays to express their own creativity. “Be true to your self and respect those before you, that is foremost. It is not about outshining anybody. Once you gain the respect from others, it is going to take you through. The entertainment scene is a lot more active now. Back then it was kind of like a more mellow party, but now it’s all about jump up jump up. I think we have a lot of talent here, so entertainment in the Bahamas can go pretty far,” said DJ Redz. He said he thinks it is important for deejays to push the music, especially music by Bahamian artists. “I am pretty adamant about that because I have Bahamian artists that hit me up all the time, because they know I am not afraid to play their music. Their music is just as good as anyone else’s music and there is absolutely no reason why it can’t be integrated into any mix,” said DJ RedZ.