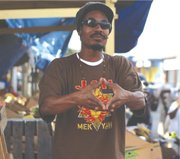 ARTISTS featured on the Stand Tall Riddim produced by Bahamian soul musician Irate are keeping their positive messages alive with the release of a video medley.

The Stand Tall Riddim video features a medley of songs including Irate’s “Stand Tall”, Peter Runks’ “Brothers Keeper”, DJ Counsellor’s “Everything There Is A Season”, DJ Chronic’s “I’m From The Bahamas”, and Jah Nyne’s “Global Crisis”.

The project was released late last year under Irate’s newly formed label “Rising Sun Records.” It was produced by DJ Frost. What has made the project so unique, is the number of Bahamian artists featured on the riddim. Other artists with releases on the Stand Tall Riddim are Mr Yagga Yo, Aundre Motive, Raquel Oliver, Julien Believe, Mdeez, Papa Smurf, Jah Hem and Sammi Star.

The video medley was released last week. Keeping everything about the project Bahamian, it was shot at the Potters’s Cay Dock. Irate said the video serves to further promote the music, messages and the project.

“When we came together to decide on a concept of the video, one of the artists came up with the idea of doing a visual medley. I thought that was a great idea because that was not something other artists were really doing. It was actually different. Medleys are usually done with the music, but we wanted to do it with the visuals as well. We tried to keep everything about the video Bahamian,” he told In Ya Ear.

“We wanted to illustrate what we were talking about in our music and at the same time show people that the issues we address are very relevant. The front pages of newspapers are plastered all over a wall in one scene of the video. Irate said the purpose for this was to make people more conscious of the stance they must take to bring an end to violence and injustice faced by many Bahamians,” said Irate.

“Nowadays everything is about who is the baddest in the country, but this attitude is the very thing that is tearing down the fibre of our society. We want people to put the guns downs and stop killing and hurting each other,” he said.

Irate said he always wants his music to be of quality, to impact the lives of people in a good way whenever they hear it.

“It is always easier to sing a song that makes people want to party and have a good time, nothing is wrong with that. But for me, it is much more to it than that. I won’t be able to sleep at night knowing that I put music out that was not something positive. I believe in making music that my children can listen to,” he said.

Irate is also currently working on a new riddim that will be released in the next few months. He is in the process of selecting artists to be featured on the riddim as well.

“When I select artists I try not to choose artists who have similar styles. When they come in the studio I let them do their own thing, and I find it so interesting to hear the things they come up with. When they are recording, sometimes I am just blown away because I would have never thought to sing on the riddim the way some of them did,” he said.

Irate has been composing music for over a decade now and is a self-taught guitarist, singer and songwriter. His style of music consists of reggae fused with hip hop and R&B creating a very unique sound which he simply calls “soul music”. As a songwriter he said he is influenced simply by life itself and he believes in writing songs about life, love and truth.