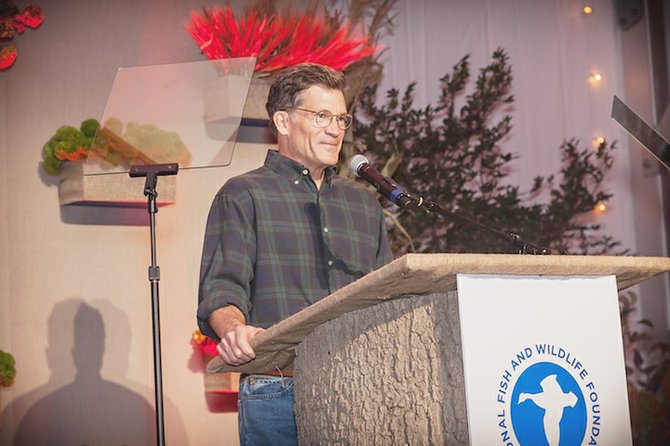 NOTED conservationist Louis Moore Bacon has been recognised as one of the largest landowners in the United States – and earned some sparkling praise for his efforts to conserve and preserve the continental legacy.

In its 2013 issue, The Land Report named the well-known conservationist, founder of the Moore Charitable Foundation and its affiliate, the Moore Bahamas Foundation, as number 43 on its list of top American landowners.

While many prominent Americans in the report are known for vast farms and cattle ranches, or sprawling estates and investment properties, Mr Bacon’s profile highlights his “lifelong commitment to conservation”.

In 2012, Mr Bacon, described in the report as “a longtime proponent of landscape and wildlife conservation”, reached an agreement with the US Fish and Wildlife Service to place approximately 167,000 acres of the Trinchera Blanca Ranch in Colorado’s Sangre de Cristo Mountains into perpetual conservation easements.

This marks the largest single conservation easement donation received by FWS as well as the largest in Colorado.

The profile –contained in a report that received widespread coverage in newspapers and on TV throughout the US – praised Mr Bacon’s efforts and notched his total landholdings at 215,990 acres.

Through his Moore Charitable Foundation, Mr Bacon has been a long-standing partner of NFWF’s Long Island Sound Bird Conservation Programme which focuses on preserving critical habitat along the Atlantic Flyway, protecting species like the Piping Plover and Least Tern which summer on those beaches and winter in the Bahamas. As Mr Bacon was being introduced at the ceremony, Paul Tudor Jones said, “Louis Bacon has always known that the most we can ever do is be a worthy steward of the land for ourselves and future generations . . . Quite simply, Louis Bacon is one of the best friends the conservation movement has ever had.”

John Malone, the telecommunications tycoon, received the top spot as America’s largest landowner with 2.2 million acres in the Land Report.

Noting that Mr Bacon comes by his environmentalism honestly as the third generation of Americans who revered the land and whose childhood was graced with wide open fields and natural habitats, the Land Report recognised the hedge fund manager’s latest achievements.

In January, Mr Bacon was awarded the coveted Audubon Medal for his dedication to conservation. As the Society awarded him its highest honour, it profiled his other easements, particularly in North Carolina where his efforts have helped lead to the reforestation of natural pine and preserved land where threatened bird species are now protected.

Few countries outside of the United States have felt Mr Bacon’s keen commitment to environmentalism more than the Bahamas.

In 2013 alone, the foundation provided support to marine education programmes that are already proving successful in building awareness, particularly among students, about the importance of preserving precious marine and land resources.

The foundation’s support included a grant to the Bahamas National Trust which, with other partners, enabled it to launch the Conchservation initiative and hire a certified science officer to manage the campaign.

Another Moore Bahamas Foundation grant to BREEF enabled that education-oriented non-profit organisation to hire a Research and Field Conservation Officer to allow more marine field trips for students and fill a critical gap in its education programmes.