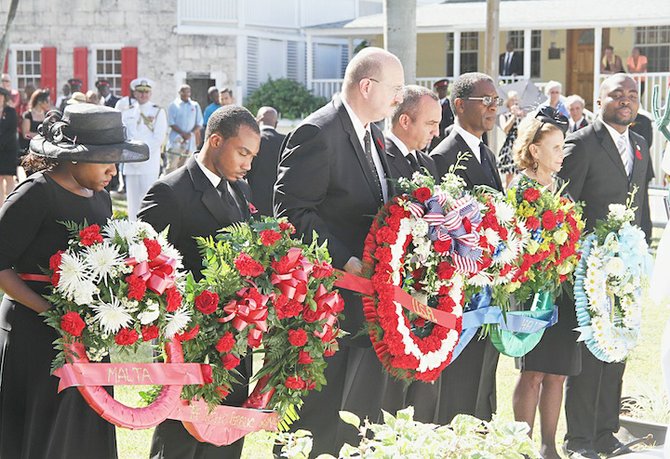 A CHURCH service at Christ Church Cathedral, performances by youth marching bands and a ceremony at the Cenotaph on Shirley Street took place yesterday in observance of Remembrance Day.

They were joined by the 29 remaining living World War II veterans registered with the British Legion Bahamas Branch.

Together, they and many others laid more than 50 wreaths around the Cenotaph.

The events were held to “honour the service of the men, living and departed, who served the cause of freedom in the two world wars,” said Michael Humes, first assistant secretary at the Cabinet Office and chairman of the Remembrance Day Planning Committee.

Also known as Armistice Day, November 11 was set aside in the United Kingdom, United States and France as a Day of Remembrance for those who had given their lives in the war.

Since then, Bahamians have commemorated Remembrance Day on the second Sunday in November.

World War II ended in 1945. During both wars the Bahamas was a colony of Great Britain and Bahamian men and women enlisted to serve in various capacities.

The names of those persons appear on a plaque at the base of the Cenotaph, the monument erected in their honour.

The Bahamas chapter of the British Legion, formerly known as the Bahamas Ex-Servicemen’s Association, was formed after World War II.