New Institute To Have Role In Environmental Assessments 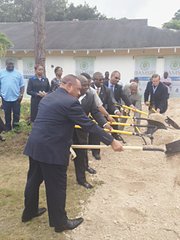 PRIME Minister Perry Christie yesterday charged that all environmental assessment requirements for development will be conducted in partnership with the new Agriculture and Marine Research Institute.

Lack of awareness and education has shortchanged the country, he said, preventing Bahamians from maximising on unique economic opportunities.

Mr Christie pointed out that millions are spent on assessments conducted by Canadian or American firms.

He added that research is essential for preservation of the country’s marine resources.

Mr Christie said: “We must ensure we know enough about it to preserve it, because it’s a lifeline.

“That’s what this is all about, this is relevant, this is going to be engaged in ensuring the preservation of our country’s resources, being bale to analyse and research best practices.”

Minister of Agriculture V Alfred Gray said: “Not being able to feed oneself is a dangerous position.

“Without food security, our country stands at the feet of every other country on whom we depend to feed ourselves.”

Minister of Works Philip Davis signed eight contracts – together worth more than $1.3 million – for the construction of residential buildings.

Just over $4 million has been allocated in the 2013/2014 national budget to establish the new school; however, the government has projected the initiative will cost as much as $20 million over a five-year period.

Mr Christie yesterday said the farm has been given a mandate to be self-sufficient in five years.

The institute is expected to jump-start Andros’ economy with widespread opportunities for job growth in various sectors, according to North Andros MP Perry Gomez, who added that the institute made good on election campaign promises to the island.

In a move to modernise the industry, the government also plans to integrate farmers on the island into the institute’s commercial processing scheme.

At yesterday’s ceremony, Mr Davis also addressed concerns over the severe state of roads on the island.

He assured residents that the government is “assiduously working to bring relief on the roads repaired very short order”.