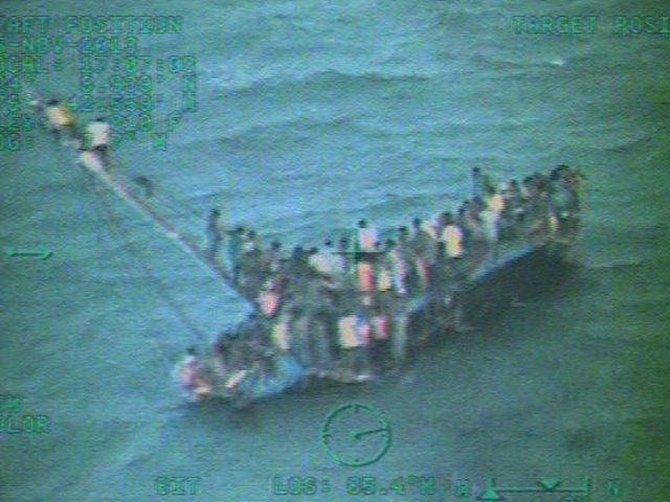 At least 30 people are dead after a Haitian sloop ran aground west of the Exuma chain during Monday's storm.

A team from the Royal Bahamas Defence Force and the US Coast Guard fought rough seas this morning in a bid to rescue the Haitian nationals from the vessel.

Acccording to the US Coast Guard, 90 people have been rescued.

The Coast Guard says the migrants were clinging to the hull of the 40-foot sail freighter when rescue crews arrived.

An US Coast Guard helicopter crew rescued 13 people from the water after deploying a raft.

You too can make is almost over half way through our country and only get caught when you run aground. I can sleep good tonight knowing that our boarders are well protected.

It is not amazing. What is amazing is seeing those Haitian sloops in the open seas with 30 foot waves, loaded with human cargo. Cruise ships could not dock in sheltered Nassau Port on Monday because of the high wind gusts, among other things, but these sloops were out on the open seas. Only GOD knows how many were lost and how many souls perished, while we sit here grumbling about BEC and VAT and teachers strike... and remember most of the persons on board never been on a boat or any craft for that matter, in their entire lives. For many Haitians, the slave trade is not yet over.

You say you don't believe in God, out of curiosity who do you pray to?

if you say so ,a billion people say the same about the Quran ,basically where you are born dictates which religion you will kill and be killed for ,,

Another example of our lackey politicians that depends on foreign entities to protect our country. The video ought to be seen when this Haitian boat first entered Bahamas territory. NATO and the US with drones, satellites, planes and helicopters - are so called monitoring the country; yet Haitian vessels and others can come into the center of the country and beyond before we know about them. This is unacceptable - PLP and FNM governments cannot get it through their house boy colonial slave boy mentality and monitor the country on their own. We need our own drones to monitor the Bahamas. Foreign surveillance has their own agendas and it does not necessarily include our priorities! Get your own drones Ministry of National Security - stop outsourcing our security now!

Why shouldn't they come to the Bahamas?

Haiti President Michel Martelly over flew the Dominican Republic and came all the way to the Bahamas to tell a grinni0ngPerry Christie to do a better job of taking care of Haitians.

There is more here than meets the eye!

The PLP and FNM obviously have a secret deal with Haiti that the Bahamian people know nothing about.

Get these parasites OUT OF OUR COUNTRY!!

At the rate things are going in this country you will soon see people here fleeing to Haiti for a better life.

A sign that things are getting tougher, not only here in the Bahamas, but throughout the Caribbean, and the world for that matter. AND IF YOU STUDY THE HISTORY of Haiti as it relates to this country we should never shut our doors to Haitian nationals, control our borders and immigration, yes, but Haiti should always have a friend to the North West.

I just want to say how ashamed I am to call myself a Bahamian. I have been reading these racist, prejudice, and judgmental statements from my "proud" Bahamians.We call ourselves a Christian Nation, but tell me, how can you be a Proud Christian and Proud Bahamian, when the Bible speaks about pride and arrogance?

1 Samuel 2:3 (#1 of 10 Bible Verses about Pride and Arrogance) 3"Do not keep talking so proudly or let your mouth speak such arrogance, for the LORD is a God who knows, and by him deeds are weighed.

Proverbs 8:13 (#2 of 10 Bible Verses about Pride and Arrogance) 13To fear the LORD is to hate evil; I hate pride and arrogance, evil behavior and perverse speech.

Proverbs 11:2 (#3 of 10 Bible Verses about Pride and Arrogance) 2When pride comes, then comes disgrace, but with humility comes wisdom.

Proverbs 13:10 (#4 of 10 Bible Verses about Pride and Arrogance) 10Pride only breeds quarrels, but wisdom is found in those who take advice.

Proverbs 16:18 (#5 of 10 Bible Verses about Pride and Arrogance) 18Pride goes before destruction, a haughty spirit before a fall.

Remember that we are also foreigners to this land because we were brought here as slaves. This land that you are so PROUD of belongs to God.

Anyone can quote verses from the bible. This does not resolve problems: As a matter of fact it is the religious factors in the Bahamas that have this nation so backward. The fact of the matter is that people are fed up by being overlooked in their own country, while illegals can come in and get the red carpet treatment. Do you realize that there are prominent companies that only hire Haitians to work? Most of which are illegal? The ones who are legal do not have a permit for the company that they work for. Therefore, the average Bahamian youngster does not have a chance to find a job because both the PLP and the FNM have failed to put Bahamians first. We cry about young Bahamian men being lazy and a menace to society: Who wouldn’t be a menace to a society that rejects its people before giving them a fair shake of getting piece of the pie. So stop saying that Bahamians are prejudice because they object to the bullshit that has been going on for years. I guarantee you- If this farce continues you’re gonna see a civil revolution, mark my word. Then you will begin to see the ugly side of a people who have been silent on the many things that have been squeezing them out their own country for so long.

So I guess as Christians we should do the "Christian thing" and just let the parasites come in. Open the darned borders and welcome them in. Boy I tell ya. If you don't laugh you'll cry.

I knew it wouldn't be long before some idiot tries using the Bible to justify genocide of Bahamians.

These parasites are destroying the future of Bahamian children and those yet unborn.

What will we tell them "PRAY FOR JOBS FROM THE HAITIAN INVADERS"?

Let this idiot or any Bahamian go to Haiti and try building a shanty town or occupy any job that a Haitian national is even remotely capable of doing...They will send you back in a tuna-fish can!!

I wish EVERY Haitian boat that ever tried coming here SUNK just like this one…We would have better schools, social services, LESS CRIME & DRUGS… and NO UNEMPLOYMENT!

Why doesn't The Tribune disclose where these rescued illegal immigrants were taken and which country is going to end up being saddled with the costs of deporting them? Oh wait, I forgot.....the Bahamas Government, whether FNM or PLP has a policy of greeting each of them with a Voter Registration Card which is why they are so willing to risk their lives at sea in the first place! It is really very sad that these poor people are being invited to their death by the failed policies of our PLP and FNM governments when it comes to tackling the problem of illegal immigration and maintaining a consistent posture that protects all Bahamians. I suspect it will not be long now before we hear of a serious cholera epidemic here in the Bahamas that will take our struggling tourism industry over the cliff forever.

Truth be told we have been selling our country for decades ,anyone w/ a little political pull can get a permit for their hatian ..There are old generals from independence days on the island i live that have 5 to 10 rotating permits from the 70,s and each new hatian that comes has to pay up to them ,,,,,,multiply by the 100,s of political lackeys ,geez old Stubs on potters cay made a good living getting Hatians straight

The captain of that boat should be charged with negligent manslaughter....

I can't stand to hear our people speak so foolishly. All y'all do is cry and complain. The Government don't do this, the Government don't do that. If y'all stop depending on other people so much, then this would be a better country. I am a small business owner and I refuse to, and will never hire any person who is not allowed to work in The Bahamas. I have hire and fired young Bahamians, and matured Bahamians, because a majority of y'all are lazy, steal, complain, and think because you work for a company means you own the company. Y'all complain about these FNM and PLP, but they are the same parties y'all vote back in all the time. Once they TIP y'all everything is all good. We keep watching these broke Haitian people while the rich white man, the Chinese and Spanish people take our land and top jobs. Those Haitian people farm and pick garbage up and cut grass. Those are the things Bahamians are too PROUD to do. Ask your selves who owns all the beach front properties, big businesses, top job positions, gated communities, Hotels, and so fort? I don't see no Haitian or Bahamian owning them. Remember that we all were slaves who ancestor were stolen from Africa and brought to these foreign lands to be treated as slaves. This Bahama land actually belongs to the Indians not us. The only reason we ended up here was to be a slave to the white man. We also are also the so called pest and parasites to these islands. So stop judging people.