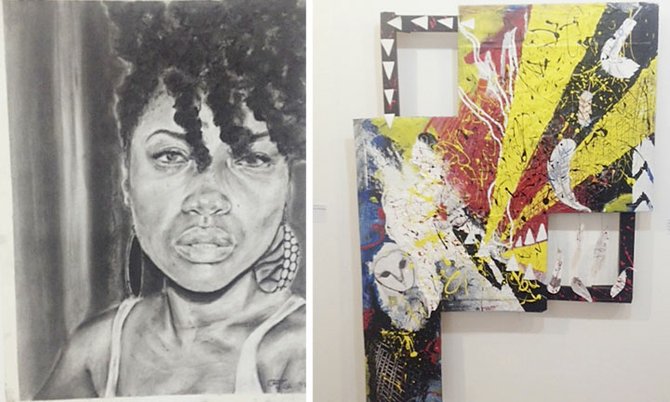 THE College of the Bahamas’ art club reintroduced itself with a public display of artwork from its members last week.

The Pro Society was revived last year and the art show ‘The Reintroduction’ was the club’s way of demonstrating who they are and what they are all about. The exhibition featured a variety of art forms including mixed media, digital art, ceramics, print making and photography.

“The College of the Bahamas and the Bahamas in general has so much hidden talent. We have marvellous musicians, great graphic artists, but these people are unheard of in the wider community. This exhibition, which is just the first of more to come, showed not just the college community, but also the wider community just what the artists of COB and Pro Society are capable of.

Many people believe that art is just putting paint to canvas, or pencil to paper. There are so many other ways to show an idea or an emotion and the artists’ goal is to show that this is only the beginning,” said Ivana Gaitor, Pro Society president.

The exhibit came together slowly, Ivana told Tribune Arts, but as time passed students submitted pieces and participation increased. There was no specific theme for the show, and the artists were given the opportunity to present work that explored any subject matter.

Some of the participants gained inspiration from homework assignments. Engineering major Kareem Williams said he was eager to participate in the show and submitted charcoal drawings.

“I submitted a portrait of a female. It is an image I found on google. I thought it was interesting because of the composition so I decided to draw it. The medium is charcoal on paper and it took about 6 hours to complete. I think it was pretty successful.

“My second piece was inspired by a project that we had for class, an assignment based on perspectives. I chose to depict the T-Block because it is the part of the school where most of my classes are held. I practically live at the T-Block.

“I joined the Pro Society club to explore art a little more, connect with other students and get exposed. I thought it was a good idea to join,” he said.

Ivana also exhibited acrylic on canvas and used a variety of vibrant colours and triangles. She gained inspiration from mosaic for the pieces.

“I think every piece is different and unique in its own way and I appreciate that and I like that. The exhibition came together really slowly and I am proud of what was presented,” she said.

The Pro Society has been around for several years but discontinued in 2009. Ivana along with several others who saw a need for the club’s presence on campus started the club in Fall 2012.

“There was not anyone to run the board and we picked the club back up in Fall 2012. We really got the ball going this Spring semester. The Pro Society has not had an exhibition since 2009. So we wanted to reintroduce the artists who are here to the community and the college community. We had a really good turn out. We had a student and faculty showing and we had some good feedback. Some people were not aware that we had a gallery.

“We want to keep things consistent because we have such a nice gallery space and so many talented young people showcasing their skills. They have an opportunity to use the space even for solo shows. We want to encourage even more of the freshmen students to take advantage of the space that is available to them,” she said.

The Pro Society’s reintroduction efforts started when the group hosted the very first Chalk It Up Festival on school grounds. The Pro Society will also host the first Sand Art Festival in the Bahamas and the second instalment of the Chalk Art Festival.