But President Calls For Fitzgerald To Resign 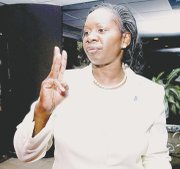 BAHAMAS Union of Teachers president Belinda Wilson is calling for Education Minister Jerome Fitzgerald to resign for choosing to go ahead with the decision to cut the salaries of teachers who participated in a sit-out on September 9th.

Ms Wilson said the minister’s decision to cut the salaries shows his unwillingness to work with the BUT.

Teachers who engaged in the sit-out recently received letters informing them of their salary cut, Ms Wilson noted, adding that they “are very angry because” the minister “is adding fuel to the fire.”

A press statement from the BUT said: “President Belinda Wilson and members of the executive team of the Bahamas Union of Teachers held a very productive meeting with Prime Minister Perry Christie and Minister of Labour Shane Gibson yesterday to discuss the many concerns raised by the union.

“Despite this meeting, the Minister of Education continues to threaten teachers publicly through the media and has issued more letters for salary cuts. The government owes hundreds of teachers millions of dollars, maybe he should spend his time trying to get the money paid to the teachers.

“Also,” she continued, “we are warning the minister to stay out of the union’s internal affairs, it has nothing to do with him, he should focus on getting the Ministry of Education in order. If he does not want to work with the union then he can resign or the prime minister can fire him, because the union is here to stay and ministers come and go and it seems as though he is on his way out.

“Maybe he needs to be informed about the 1981 strike where teachers did not work for more than three weeks. Yes, we love our students, but teachers will not and the union will not sit idly by and allow any minister to threaten, victimize and mistreat any member of the BUT.”

Asked how BUT will react to the planned salary cuts, Ms Wilson said: “There’s something called due process. If you don’t come to work tomorrow, could your boss tell you Friday that you are getting a pay cut? No, he has to investigate. What the minister is doing is a law unto himself. And we have all sorts of avenues to go through until we get what we want. Striking would be the last thing.”

Ms Wilson also said that in her view, conciliation efforts between the BUT and the Ministry of Education at the Department of Labour was “a waste of time.”

The talks between the two parties began after the BUT filed seven trade disputes against the government last month. “The ministry has just been filibustering and stalling,” Ms Wilson claimed.

As for Anatol Rodgers High School and Maurice Moore Primary School whose principals the BUT wanted removed, Ms Wilson said the issues at the two schools “will remain until they are addressed in the proper manner.”

this woman has no shame.

I've heard in the last few months 100's of thousands needed school books have been donated to our Ministry of Education and another shipment has just arrived.
Is this true, if so where are they ? How will they be distributed ? Where did they come from ? What type of books ? My school is desperate need of books. If this acquisition of books is factual then where have these books been going ?

Too bad you're ONLY a citizen of this country. You are not entitled to this kind of information. Your job (like mine) is to SHUT UP and wait until 2017 and then show up and mark your "X" for the set that spend the most money on beer and fried chicken. Then go back to shutting up again, after that. No insult intended for you - I am in the very same boat. We all are. Slavery remains alive and well, just under another name. A famous quote once said "The best slave is one who does not know he is a slave". But now they're giving us "Majority Rule Day" on Jan 10th, like a pacifier in a baby's mouth.

You are Crazy!!!! lol... i will look for more of your comments as i like this one. May not fully agree but I LIKEEE!!

Fitzgerald ought to resign, yes - but not because of cutting those paychecks. Instead he should resign because of the horrible conditions of many schools, esp. those that were not ready to open on the first school day.

This from a govt that claimed to be "ready to govern on day one". They can't even fix a screen in a school window during a 2 1/2 month summer holiday.

Maybe she needs to go back to teaching P.E. where she use to be absent at least for every third class we had with her. When you sit in the media and *itch and moan everyday, you come across as being weak and a troublemaker.. its almost midterm. Put the muzzle on and let the chir'ren settle down and do their exams. And your makeup is starting to run.

Fitzgerald employing thug tactics, if I were a teacher I would quit and find a another job. They treat you like garbage and expect you to just take it, lets see how bigity Fitzgerald acts when all the teachers walk off the job. You got the intellect you don't have to take this.

All they did was protest that they didn't want to teach in moldy, windowless schools with no air conditioning. Schools with not bathrooms working where you could smell the crap from the bathrooms filling the windowless classrooms and where some schools don't even have a roof on some islands.

How dare they! Fitzgerald cuts their already low pay to teach them a lesson and to threaten those that might seeks to disobey Lord, King and Master Fitzgerald in the future.

This guy is a joke, and needs to be FIRED!

Its time that Ms Wilson and / or the minister provide the Bahamian public with the statistics on the number of " teachers" that are certified, those that are teacher assistants, thos that have associate degrees, bachelor degrees, masters and doctor degrees, a d those that are classroom monitors. most importantly we need to know which ones have science degrees, ie, chemistry, biology, physicals, math, etc

The MOE publishes reports with these statistics, It is online somewhere-- not up to the BUT. However, it is a mistake to require "certificates', because all over the world, the graduates of the School of education have the lowest GPA in a given College or university.

All people do in the School of education is cut paper and glue it to the wall, and the MOE only hires people with certificate for over 25 years, and the education system is in shambles.

the problem is, if one has a teaching certificate, that only qualifies them to teach that for which they were certified. Once in the school system, they assign the PE teacher to teach Math and the Commerce teacher to teach English.

But not math and english, the school system believes anyone with a pulse can teach these subjects. that is a major problem in the system and no one talks about it.

How do either of them ,Fitzgerald or Wilson have the gall to fight over a 300 million a year Ministry ,the biggest in our budget ,that year in year out produces a failing product . Surely some of it is the parents fault but there is also blame to be placed on the Ministry ,the product COB is turning out as teachers ,and the unions .Two people fighting over the spoils of a business failure ,,only in the public domain can this happen..

again, in college people laugh at the students of the school of education, they are the dumbest students. And now, everyone talks about finland, but there, only the folks with the highest performace can take up the profession.