Inside The Prison Walls 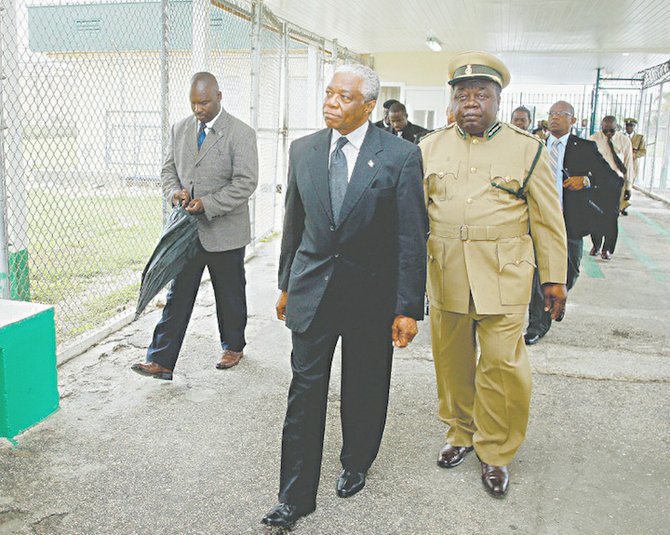 IT’S long been said that the overcrowding at Her Majesty’s Prison has been a breeding ground for criminal activity.

It is a place where persons convicted of relatively petty, non-violent or victimless crimes are housed alongside career criminals.

This, compounded by decades of deplorable living conditions, makes HMP a graduate school for those who become some of the nation’s most hardened offenders, according to lawyer Paul Moss.

Mr Moss said because the Bahamas has the highest rate of incarceration in the Caribbean, serious consideration needs to be given to changing the prison from a punitive institution to a rehabilitative facility.

Her Majesty’s Prison continues to fail to meet international standards, with overcrowding and access to adequate medical care presenting major problems in the men’s maximum-security block.

“I don’t know how we can believe putting people in that condition can help them come out better it’s just not going to happen,” Mr Moss said.

In August last year, authorities reported that the daily population of the prison and the remand centre exceeded 1,600, compared with 1,300 in October 2011.

Minister of National Security Bernard Nottage characterised the extent of overcrowding at the prison as “unacceptable”, attributing the overcrowding to the large number of petty criminals incarcerated and the backlog in processing at the remand centre.

In June, the prison superintendent reported the maximum-security wing of the prison held nearly 900 inmates, which was twice the number of inmates it was built to house when constructed by authorities in 1953.

Authorities reported that as many as six inmates were confined to cells intended for one or two prisoners. Others are housed in poorly ventilated and poorly lit cells that lacked regular running water.

In 2010 authorities installed composting toilets in an attempt to move away from the unsanitary practice of removing human waste by bucket, or “slopping”.

“When one sees the way food is delivered to inmates in huge pots sometimes dragged through the corridors. If there is a chicken, the inmate inside of the cell will give their bowl and the chicken is placed in the bowl with the hands of the inmate serving. Even if he has gloves on it is the most pointless thing because although he has gloves on his hands are touching the bars, touching the crates, touching all manner of things. Those things can be corrected - if there was a will to do it - overnight,” Mr Moss said.

According to a report entitled: “Rehabilitation of Inmates: A National Imperative” by former Superintendent of Prisons Dr Elliston Rahming, for every 270 citizens in the Bahamas, one is incarcerated.

In terms of the size of its prison population, the Bahamas ranks ninth in the world and number one in the Caribbean on a per capita basis. The country has some 435 persons behind bars per 100,000 population.

Mr Moss, who makes frequent visits to HMP, points out that this and the conditions at the prison not only have an affect on the incarcerated but also on the prison officers who work in those conditions.

“It dehumanises them, makes them feel like they are not only punished but being meted out cruel and inhumane punishment and that makes them more angry from what I have seen.”

While the relatively new remand centre has helped to alleviate the overcrowding, Mr Moss said the centre itself is overcrowded.

He said: “I believe it can be corrected if there is an holistic view of the prison system. Persons need to have access to resources that can allow them to redeem themselves and have some recompense. The only way for that to happen is to establish another prison outside of New Providence for sentenced men and permit HMP today to be the one for intake or remand.”

He said that many forget that a person who was once incarcerated will be out on the street again.

“Sometimes you would be lucky and see when a person has been released from the prison and unless they have the opportunity to work on the scheme they would not be given anything.

“Because we have failed to rehabilitate them in a way that would allow them to come back into society it goes back again and the same crimes or worse crimes are committed. Society suffers by being negligent in not permitting wholesale rehabilitation,” Mr Moss said.

The PLP and FNM are jokes. They don't have enough sense between them to figure out they are making a bad situation worse by locking up hundreds of people for petty crimes where they are treated much worse than dogs at the Humane Society, dehumanized, desensitized and quickly turned into hardened criminals just to survive in Fox Hill prison, then set loose to wreck havoc on an unsuspecting society.

Please go away PLP and FNM.

My 9 year old has more sense than all of you idiots combined!

THE CANADIANS ARE WILLING AND ABLE TO SPONSOR A FULL PLEDGE PRISON FACILITY TO THE BEAUTIFUL BAHAMAS....... ANYBODY WILLING TO ASK?????

Comrades how many years now that they have been preaching that locking up our citizens behind Her Majesty's Fox Hill Prison walls can somehow reduce future criminal acts resulting from reduced recidivism of returning inmates?. Comrades Prison or longer jail sentences, does not teach inmates that crime does not pay. What we should have learned after all these imprisonment of our citizens years, is that the only thing painful thing being extracted from locking up our citizens, is having to collect higher taxes to run the prison year after year. Not only is there the high operating costs per inmate but it's an all new breeding ground that criminologist will tell you, only increases deeper criminal activities once they are returned back to into society with an all new set of learned criminal skills. Fox Hill Prison is an all new criminal society in itself. Comrades 60% of the prison population that the courts have locked up, are of no danger to the FREE society they were snatched from. Yet consecutive Bahamaland governments keep selling the lie, that more brute force, policeman's and longer jail sentences are exactly what we need to protect our citizens. What the citizens really need is more protection from whatever political party just happens to be the government of the day.

The Christian Council will never agree to allow police officers to look the other way on petty marijuana possession - but only for number houses. This is because of which one they can get money from.

The CC is a much bigger threat to our freedom and our hope to one day be a modern society than any 100 prisoners combined.

However, the CC can only exist from donations by individuals every Sunday in the plate. If people would stop doing that, they would have a much better, cleaner, modern, and sensible society to live in. Maybe that will happen a hundred years from now.

Comrade John33xyz I feel your thoughts but I wouldn't rush out to lay blame against the preacherman's at the Bahamas Christian Council. May I suggest that if we (our government) continues to hire consults who think we need to hire and arm even more policeman's, that my dear Comrade is exactly what their pricey, useless consultancy reports back to government will recommend. You can buy any report you damn well got the money to pay for. When we've had connective governments who thinks along the lines of locking up their citizens and calling for unbalanced and and unreasonable bail amounts, then you have to expect that their objective all along, must have been to lock up even more citizens. It bothers the living hell out me me when I hear talk that PM Christie and former PM Hubert are too damn old to hold the office of PM, it rattles my common sense thinking. You know what I like about old people. It is that they done lived and will tell you exactly what's on their mind. No need to be pussy-footing around with putting it to you in a polite manner, so your feelings ain't go'in be hurt'in. if you want get the best no BS advice money CAN'T BUY, then hire residents over the age of 80, scattered from across our Bahamaland's Out islands. Forget about Nassau and Freeport, cause their brains think too much like hired-gun consultants. If you standing before the Judge for stealing a package of meat from the supermarket's freezer, where in the hell do you expect the accused to go find $5,000 for posting bail? The higher up in society you are. your connections or where you live, whose your daddy or mommy, often can determine the amount of your bail, or if you are go'in to even be required to post any bail at all to win your freedom? Justice in Bahamaland is no friend to the poor accused Comrades. Go check and see is is sitt'in in them crowed cells up at Fox Hill. Aain't too many, if any from the Eastern or Western Roads and it ain't like they don't rape, kill and thief other peoples things.

TalRussell, the CC is also aware of the atrocities at the prison. They have said nothing. They have done nothing. No protest marches, no talking about it when they get their air time on TV every week.

BUT let a gay cruise ship set course for Nassau Harbour, and the Christian Soldiers rally the troops real quick.

I'm not voicing an opinion for or against gay cruise ships. My point is that they can rally troops when they WANT to - and obviously to help their brothers suffering in prison they simply do NOT WANT to.

There are difficult Bible passages which must also confuse the actions of even the preacherman's members of the Bahamas Christian Council, who are so against the lifestyles of gays/lesbians in general. It might be helpful, if those who profess to be God's preacherman's, first have at least a basic understanding for the complexities of the Bible, including Matthew 19:10-12. I'm guessing the incredible Pope Frances must have studied this passage cause he seems to understand fully what Jesus was saying to his disciples?

Yes, they claim to be against gay lifestyles - but they are fine with the gay activities at the prison.

I think that in the photo above, Elliston Rahming has been zombified. He looks like he got his uniform at a Chinese military surplus store.