Increasing The Profile Of Distance Running In The Bahamas 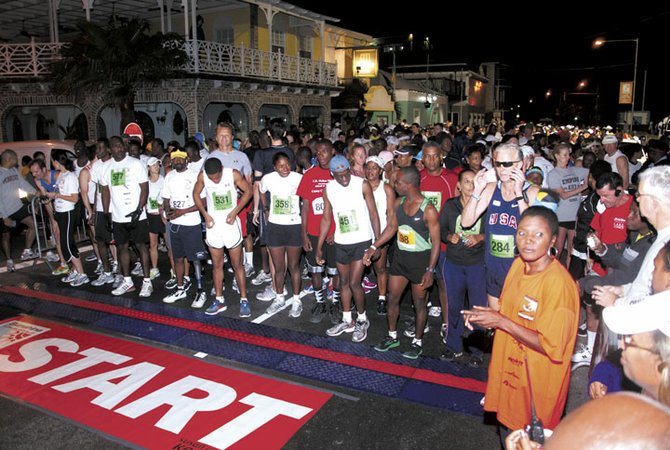 MARATHON Bahamas has become a major staple on the Bahamas’ sports tourism calendar and now with the advent of the Bahamas Half, the relationship between the two events is set to further increase the profile of distance running in the Bahamas.

The Bahamas Half is all set to run off during the Thanksgiving weekend (November 24), in addition to the annual Marathon Bahamas race weekend which takes place in January.

The Bahamas Half is the brainchild of the Bahamas Roadmasters running club, an organisation which has carried the mantle of distance running in the country for years, according to Veronica Duncanson, executive vice president for Marathon Bahamas.

“We want to congratulate the Bahamas Roadmasters for organising and staging the first Bahamas Half Marathon and as an organiser of Marathon Bahamas, I personally want to thank Bahamas Roadmasters,” Duncanson said. “When we started Marathon Bahamas five years ago, this was really the group that brought credibility to our event. For those of you who don’t know, there are scores of Bahamians, led by the Bahamas Roadmasters, who travel annually around the world carrying our flags to various marathons. They were the ones to really work with us and advise us on the way the event should be carried out so we fully endorse and support this venture for them and both organisations will be working closely together. The charities that will be benefitting are worthwhile and certainly in need of all the assistance they can get so we encourage everyone to come out and support.”

The Bahamas Half will take on a scenic route, similar to Marathon Bahamas, concentrated on the western shoreline of the island.

The 10k race will follow the same course and turn around on Baha Mar Boulevard.

“Charles W Johnson, a Bahamas Roadmasters executive, said the competition will be at a high level with the growing popularity of distance running. We have two elite runners who have registered. They are familiar with that course so they will be pretty much familiar with this race as well,” he said. “Distance running is perhaps one of the fastest growing sports in the world and when you look at the number of distance runners in Florida alone on a week to week basis you really see the potential and I think it is why the Ministry of Tourism has bought into this idea.”

The Bahamas Roadmasters running club was established in 1990 and is a non-profit group which promotes the sport of distance running and prepares runners to participate in half (13.1 miles) and full marathons (26.2 miles).

Members have participated in the marathon “majors”, including London, New York, Berlin, Chicago and most recently the Boston Marathon and other marathons based in the United States and Canada.

Local registration will be available at all three locations of the The Sports Centre, Harbour Bay, Mall at Marathon and Sandyport.

Participants are encouraged to register as quickly as possible as event organisers have placed a cap of 400 athletes on the inaugural event.