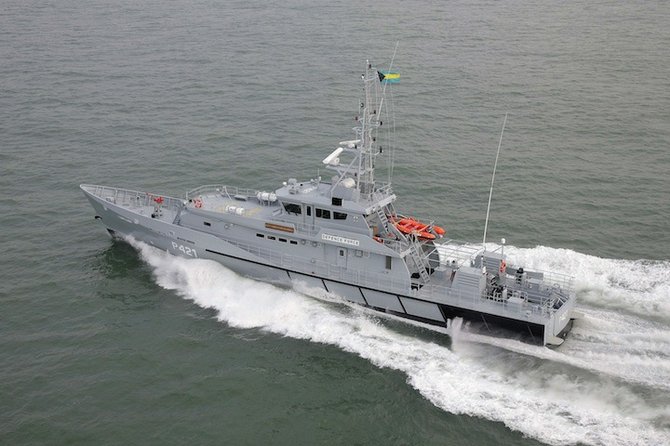 Construction of the vessels are on time and consistent, according to Dr Nottage, who confirmed that two more 138ft vessels will make the voyage across the Atlantic to the Bahamas before the end of this year.

Dr Nottage, accompanied by RBDF Commodore Roderick Bowe, travelled to Amsterdam to review progress of the project and inspected three of the ships said to be in an advanced stage of completion.

He spoke to the press upon his return from London at a press conference held at the Lynden Pindling International Airport.

Dr Nottage said he and his team also had the opportunity to meet with Van Oord, the dredging company engaged to expand three ports to accommodate the new vessels.

The company has not yet started dredging operations, according to Dr Nottage, who said discussions focused on efficiency, timeliness, and costs for the project that is expected to start late next year.

A team of 14 officers are presently stationed in Amsterdam to be trained to operate the new modern fleet, according to Commodore Bowe, who added that Jamaica’s defence force has also agreed to assist with the officers’ training.

The Christie administration tabled a resolution to borrow $232 million for the purchase last month.

The loan from Deutsche Bank will provide $149 million to build each of the ships, and an extra $75 million to cover civil works for a total of $224 million.

The remaining $8 million will accommodate any changes that might arise during the scope of the project.

Great! Now lets add some helicopters to aid this brigade.

sadly, our airwing of the RBDF is very underwhelmed and , understaffed and equipment in poor state. i agree we could use rotary aircraft but first we have to get our fixed wing aircraft back to 100%

Why are we so behind the times in terms of technology?

Just another example of the fiscal irresponsibility from our leaders. We're a broke country but our leaders seem to think that borrowing another $232m will be just fine.

The Bahamas is in need of these vessels . There are to many persons taking all of the fish and craw fish out of the Bahamian waters. and the illegals have the Bahamas for a joke. they just keep on coming. The benefit of these vessels will out weigh the coast and the fine men and women of the Defence Force deserve this equipment. and so do the Bahamians who fish.

That's why they need to invest in aerial patrol rather than more ships. But no they getting more ships...they want the Dominicans to take all our resources and by the time they catch on and sail over there they back in Dominican waters with all our seafood.

Working smarter birdie...heard of it?

I doubt that position. The ships we have now sit idle at dock for most of the year. What will change with these new ships?

I think this will go down as the biggest waste of money this PLP term....

Sexy looking ship. A small mistake in this article, the HMBS Arthur Dion Hanna is not the large roll-on landing craft but the 138ft 4207 patrol craft. Does that ship really look like a landing craft...

Hope to God the government put the right systems in place to make these ships operate effectively............... as it stands now, we are not convinced.

I just love that video, good job Tribune. Now do you have a video of the school marching bands contest. ?

Wow, and in a few years this boat can join the other 5 boats setting over on dry land over at the police academy and who knows how many at the RBDF site....that's right secretary, just keep buying toys for your country and running us into the ground....don't ya think this money could have been put to better use?! What next? A submarine?

A disgusting waste of money. They will do EVERYTHING ELSE they can think of except put up a radar station and immigration holding facility on one of the southern islands.

These are VERY expensive tug boats that will only be used to tow (free of charge) Haitian vessels from the southern islands into our capital city - where they will be turned loose to take away Bahamian jobs.

Ordinary tug boats (like the kind used for the cruise ship docking operations) are must more efficient at towing (that's why they're called TUG BOATS).

AS DRUGS BECOME less "Illegal" in the US and Canada, the US may begin pulling a lot of its defence and coast guard resources out of this territory. THE BAHAMAS will have to step up to the plate more and protect its boarders and its marine and other resources. NOW is the time to invest in human resources and equipment to begin that task. BOATS are expensive to obtain and to maintain and to operate. So these craft must be deployed in strategic places where they can protect our resources, intercept poachers (and smugglers) and ensure the are brought before the courts and pay hefty fines. It is believed that less than one third of the tobacco products sold in this country come here legally and pay the proper customs duties. A similar story is for alcohol (rum) which it is believed smuggling is on the increase. If this is the case, deploying one or two of these craft around Grand Bahama, Abaco and Bimini can pay huge dividends

TO all of you saying this is a good idea and the country needs it.

Why do you think these ships will actually work at sea? Why don't you think they will do as the ones we have now do and sit at the dock as a sight for downtown?

What exactly makes you think something has changed and our government will spend the 25 to 30 million a year to keep these things at sea? If we can't keep the two we have now at sea what makes ya'll think these 9 will be used to their potential?