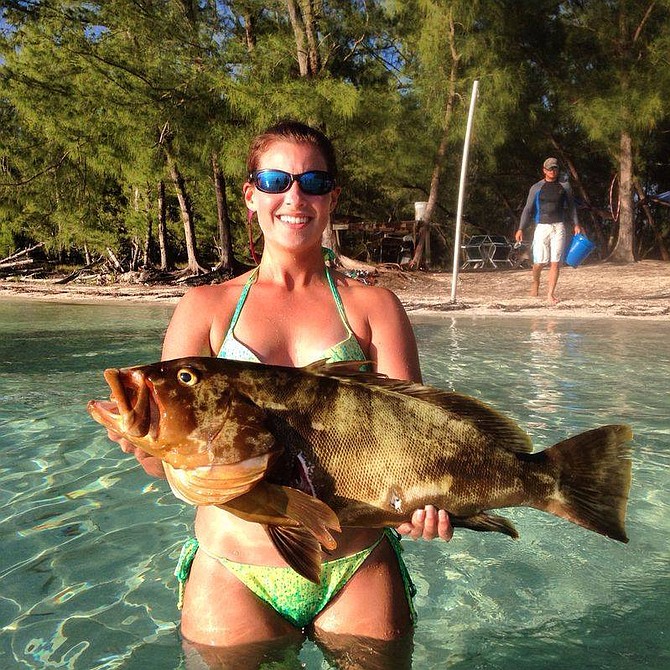 ONE of the largest supporters of marine conservation in the Bahamas has praised the government for its decision to declare a fixed closed fishing season for the Nassau Grouper, allowing the critically endangered fish a chance to spawn.

The Moore Bahamas Foundation (MBF) also commended the Bahamas Reef Environment Educational Foundation (BREEF) for its campaign that helped lead to the announcement that legislation was being introduced to ensure a three-month safe season for the prized fish to reproduce. In the past, whether to close the season to commercial or recreational fishermen was made by the sitting Minister of Agriculture and Fisheries and there was no guarantee that there would be any protection period to enable the species – which has shown a 60 per cent decline over the past three decades – to regenerate.

This week the Department of Marine Resources announced it was not only declaring the next 90 days closed, but that it would amend existing legislation so the decision would prevail annually. It was a move BREEF and the MBF hailed as a victory for fishermen as well as for the species.

“This is one of the greatest victories in the battle to preserve and conserve nature’s marine resources, and The Moore Bahamas Foundation is pleased to offer congratulations to the government of the Bahamas, in particular the Department of Marine Resources, for taking the bold step of creating a permanent three-month closed season to allow the Nassau Grouper natural time to spawn,” said Ann Colley, MBF Executive Director. “We also wish to congratulate our long-time partner in marine conservation and education, the Bahamas Reef Environment Education Foundation (BREEF) for its tireless, 20-year campaign that helped lead to this important decision.”

BREEF’s executive director Casuarina McKinney-Lambert emphasised the importance of the legislation. “Many people think that the closed season on Nassau Grouper was legislated in the Bahamas since the country has been closing the fishery each winter since the late 1990s but this new commitment to amend the legislation for the closed season with fixed dates is a very important management action,” she said. “In the past, the lack of advance notice of closure failed to give the public, including seafood vendors, fishermen, restaurants and law enforcement time to prepare. Because it was decided annually, it also gave rise to confusion and conflict. This is not just about a fish. People’s livelihoods will be significantly impacted if this fishery collapses.”

The decision was also welcomed by senior research scientist at the Perry Institute of Marine Science, Dr Craig Dahlgren, who has done extensive marine research in the Bahamas. “The research that we have been doing over the past 20 years indicates that a closed season during spawning months is essential to sustainable Nassau grouper fisheries,” he said.

Colton Cartwright, a Long Island fisherman, called on authorities to prosecute those who fail to obey the closure. Mr Cartwright, who is taking part in the Nassau Grouper spawning aggregation research, said he “supports the closed season and would like to see enforcement focused on fish houses that are buying illegally caught fish and on foreign poachers.”

Bahamas Sport Fishing Network’s conservation expert in Bimini, Grant Johnson, described the decision as ”another great stride towards the long-term sustainability of our fisheries”. He added: “This is good for the grouper, good for Bahamian ecosystems, and good for the people who value these fish as a resource.”

He explained that the Nassau Grouper, like many other reef fish, gather into large spawning-aggregations during specific periods of the year and that studies suggest fish can migrate from over 100 miles away to take part in these reproductive cycles. “Protecting spawning aggregations from fishing pressures not only gives these grouper a safe opportunity to create the next generation of fish, but it ultimately protects the regional health of the fishery by ensuring that these widespread individuals can’t be targeted when they gather en masse at specific locations,” he said.

“Here in the Bahamas, it’s sometimes difficult to believe that much of the marine life that we see as so abundant has been wiped out of many other areas. By respecting and enforcing the closed season for Nassau Grouper, we can help ensure that these economically and ecologically valuable fish continue to thrive in the country for which they’re named.”

Nassau Grouper populations have dwindled dramatically or been totally eradicated in Florida, Bermuda, numerous Caribbean countries and even in one well-known Bimini aggregation site, according to BREEF’s research, supported in part by the MBF, an affiliate of Louis Bacon’s Moore Charitable Foundation. The organisations have worked closely in other marine preservation projects. In 2013, The MBF awarded BREEF a commitment of $150,000 over three years to fund the position of research and field conservation officer to boost the number of students experiencing firsthand the waters, coral reefs and marine resources of Goulding Cay and the western New Providence bays off Clifton.

“The Nassau Grouper, with its distinctive appearance, its role in the ecological chain of coral reefs and its place in the Bahamian diet, is integral to the Bahamian menu and culture and is a backbone of the fishing industry,” said Ms Colley. “But in recent years, the numbers have declined significantly and fewer Nassau Groupers are surviving to the sizes they once were. Prudent management, including an enforced closed fishing season during spawning months will go a long way toward preserving this important species.

It is fantastic that government has taken steps to protect the Nassau Grouper. The question on everyone is asking is will the law be enforced? Just yesterday there was a picture making the rounds on social media of Nassau Grouper for sale at The Montague ramp fish market. The caption said the picture was taken yesterday morning December 10th. If this is the case people are breaking the law. Who, if anybody, is out there checking and enforcing the law?

they got grouper for sale on the ramp today as well !! openly advertised !! the government is a joke as there is no enforcement of the law. unfortunately they will wait until there are no more grouper left.

The Bahamas has a terratory of over one hundred thousand square miles, so yes it is very difficult to police and waters and enforce the maratime law. However when Bahamians see persons selling Nassau Grouper out of season and do nothing they are just as bad those who they accuse of doing nothing to protect the fish. There are agencies that direcly deal with such matters. So the best way to protect the Nassau Grouper and see that they reproduce so that we can enjoy them for many years to come is to contact the revelent authorties and see to it that the persons who catch and sell Nassau Grouper out of season are dealth with. You do not need to be a rocket scientist to do that.

The culprits are hiding you see...they are not in the government offices trying to sell the Nassau grouper...they are hiding out in the streets trying to sell their catch. you can't expect anyone to go LOOKING for them...even when you are told point blank where they are!! Just one more prime example of why we are where we are now...there is zero enforcement of our laws.

and the next thing you see is a dead grouper been gut shot with spear hole in the belly.