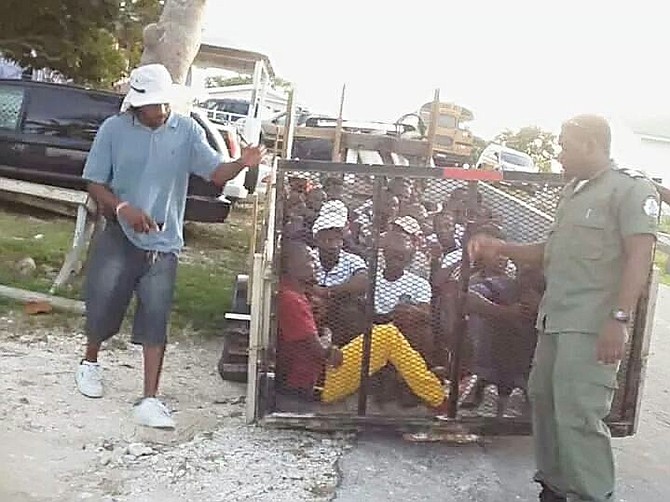 HUMAN rights activist Fred Smith has demanded that Immigration Minister Fred Mitchell explain a photograph depicting illegal migrants “caged like animals” in the back of a vehicle following an apprehension in Exuma.

Mr Smith, a QC and head of the Grand Bahama Human Rights Association, said if Mr Mitchell “will not answer for what is happening, the GBHRA calls on Prime Minister (Perry) Christie to relieve him of the immigration portfolio, and bestow it upon someone with the foresight and clarity of thought to see where this disastrous policy threatens to take us”.

Disagreement between the two over the government’s newly implemented immigration policy intensified earlier this month when Mr Smith compared conditions at the Carmichael Road Detention Centre to a Nazi concentration camp. His statement came days before Mr Mitchell was due to speak before the Organisation of American States, to clear up what the minister said was misinformation over the immigration restrictions.

Mr Mitchell yesterday dismissed the calls for an explanation from Mr Smith.

“Fred Smith is a complete and absolute joke and I will not respond to anything he says,” Mr Mitchell told The Tribune. “He has to withdraw the slanderous remarks made about the government and the Department of Immigration. When he removes and retracts the remarks he made, then I will respond but until then, I don’t have any comment.”

When asked if he had seen the photograph that was circulating on social media, Mr Mitchell repeated that he had no further comment, other than to emphasise that Mr Smith “is an irresponsible individual ... and that’s all I have to say about him”.

The Department of Immigration later issued a statement on the matter, noting that the interpretations that the immigrants were being mistreated “is a false and malicious construction of events” which “appear designed to defame the department”.

“The people in the photo were sitting on the back of a flatbed transport or trailer with an open end at the back of the trailer secured by a removable metal tailgate,” the statement added. “The trailer was used to ferry the individuals from where they landed in Exuma to the holding facility, the E C McKenzie auditorium in Ramsay, Exuma.

“The migrants were held at the auditorium overnight until they were transported by the Royal Bahamas Defence Force to Nassau. The journey from the landing point in Exuma would normally take 30 to 40 minutes. At no time was any person under the care or supervision of the Department of Immigration kept in inhumane conditions.”

However, in a statement at the weekend, Mr Smith said the trailer looked like something that would be used to transport livestock, not people.

“Responding to the many (claims) of physical battery, wrongful detention and unlawful tactics which have arisen over the last two months, not to mention the recent rape allegation against a senior immigration official, Mitchell’s stance has been that the Bahamas government does not condone the abuse of detainees,” Mr Smith added.

In Mr Smith’s opinion “this is a calculated and cynical dodge. The fact is, as minister he is responsible for the Department of Immigration, its employees and their actions. In all such cases, the buck stops with Mitchell. His excuses are simply not good enough”.

The photograph, Mr Smith said, is as a powerful example of the kind of unconstitutional, inhumane and degrading treatment of individuals – who are innocent until proven guilty under the law – which has stained the Bahamas for decades.

He added that the GBHRA is in the process of collecting testimonials of Bahamians of Haitian descent in particular, who alleged unusual and unwarranted scrutiny by National Insurance Board officials, illegal fees levied for children in the public healthcare system and denial of access to a public school, among other things.

A cage has 6 sides not 5 you dumb Haitian parasite! Your Haitian brethren are SITTING in a topless landscape type trailer for security and their own safety.

Wish YOU were with them Ashlock!

Fred Smith will do well to remember that Exuma does not have the transportation necessary or the housing for such a large number of illegals. I am sure the officers did their best with what means they had. Fred Smith will do well to speak to the Haitian people in the Bahamas who are encouraging their people to come to the Bahamas. Those people are operating a illegal ring and Fred Smith knows exactly what is going on, he can not be that crazy. but maybe he is.

did you see the BIG yellow bus in the background whats worng with using it instead of a trailer .

They likely did use the bus (unless you know otherwise) because clearly there is not 150 people in that trailer.

Ahhh they are used to worst conditions Mr. Smith...I'm sure you see and know the vessels they arrive in

all I see is a trailer load of parasites.

Fred Smith have three countries US, Haiti and the UK where he can run and hide when the Bahamas has come to a total mess because of people like him. He don't have any more to say than the rest of us who have been raising the exercises of these talking points for decades, it's just that he is a Johnny come lately loud mouth ready and willing to sell us all down the river for big profits, and I am sure he will.

Fred Smith is not here to help fix our country but to find and exploit the loop holes that exist in the ancient law books of this country. Instead of fixing them he is using them to big himself up, I do not questioning the vital talking points he is using and and willing to abuse, no, what I am questioning is his purpose. It is past politicians get to work or get out of the way, no more enrichingis themselves and the friends on the backs of the people and this country.