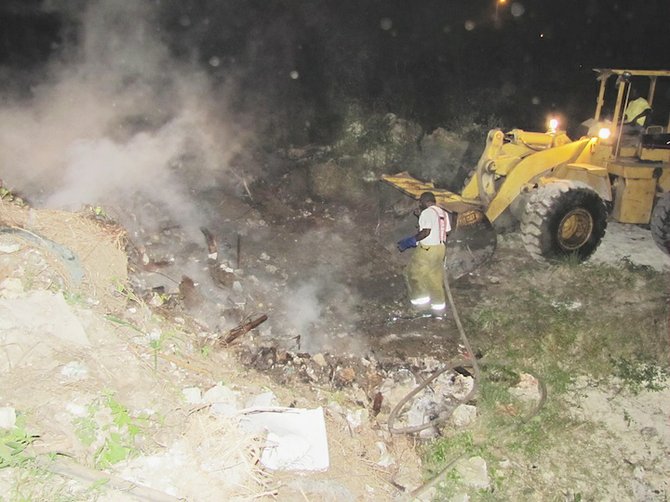 A FIRE, that has been burning in the Fox Hill community for almost two weeks, is finally under control, according to Fox Hill MP Fred Mitchell.

However, Mr Mitchell said extinguishing the fire has cost the government - and in essence the public - tens of thousands of dollars and dozens of residents have had to temporarily relocate.

Speaking with the press, Mr Mitchell said the fire, which is believed to have been started by children, was facilitated by indiscriminate dumping.

“One of the issues that was raised last night, and it is a sensible point, is that some people may have been making money off of allowing this dumping to take place and this private gain has resulted in now the public administration having to spend tens of thousands of dollars to set this right and so that is another reason why the public suffers as a result of indiscriminate dumping,” he said.

“If you were to take a drive around, by the entrance to Saint Augustine’s College, you will see they have all kind of trash and we just had that area cleared about three weeks ago and yet they are dumping again and if we are not on top of this it will start again because the fire is burning below the ground.”

Environment Minister Kendred Dorsett said the site of the fire, according to his information, has been used for illegal dumping for years.

“The reality here is, we have a site that has historically been used both as a quarry pit for the escavation of fill for the road works in New Providence but clearly it has also been used for illegal dumping. Anecdotal information that was passed on to us indicated that the fire may have been caused by children who move through this area and neighbours indicated that they saw them setting fires,” he said.

“The police are investigating and will be able to speak more to that, but I am simply happy that we were able to mobilise tractors from the landfill to assist. For the residents of the neighbouring areas, we hope that in the days coming you will not experience the challenges that you have had over the last few evenings and I would encourage you, that if any of you are having respiratory or breathing challenges to go to the clinic or the hospital for treatment.”

Fire Services Chief Walter Evans told The Tribune at the scene Sunday night, that they had three fire trucks, along with three 5,000 gallon water trucks and one pay-loader working on the fire.

By 8pm, the majority of the blaze had been extinguished with only residual flames being tackled at the extremities of the site.