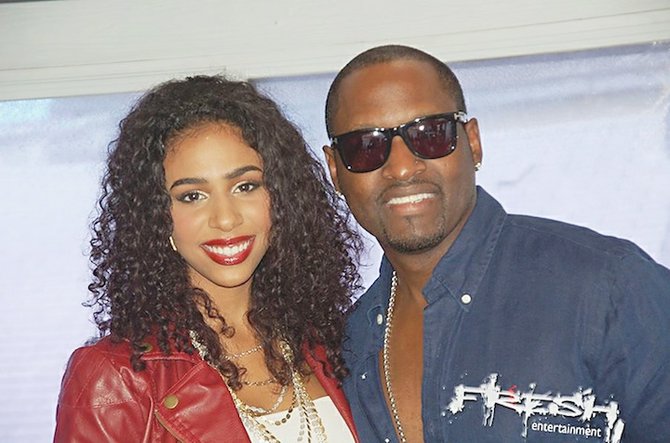 THE one thing Grammy nominated singer and performer Johnny Gill has in common with Bahamian artists Julien Believe, Angelique Sabrina and FourEver 1 is the ability to produce good music based on drive and motivation. Last Friday, the Fresh Entertainment team brought these artists together at the Curly’s Restaurant on Arawak Cay for a press conference ahead of this year’s ‘Celebration of Love’ concert. Having visited the country many times before, Gill said he was happy to be back, to have a good time and give the Bahamian audience what they were waiting for. Gill, known for his participation in the successful R&B group New Edition back in the day, said he has managed to stay relevant and successful over the years because he is blessed. “You can sit and try to make plans, and some things work and some things don’t, but being passionate is something that is a part of my life. This is what I have been doing all my life. Being driven and motivated are things that are really important. As I have gotten older in life, I understand and realised that it is truly a blessing and I don’t take anything for granted,” he told the members of the media. He said there is not a single time when he goes on stage or into the studio and does not leave all his passion there.

“I try to come out with the best that I can give. The things that makes an audience connect to you is that realness and authenticity,” he said. Bahamian singer Angelique Sabrina said it was exciting to have the opportunity to share the stage with talent such as Johnny Gill.

She said New Edition’s “Can You Stand the Rain” song was phone’s ringtone for a long time. “When I get to open up for people that I look up to and study, it always makes it much more meaningful,” she said.

“I just watch and try to learn from their performances.”

Like Angelique, the FourEver 1 quadruplets said they were very honoured to be the opening act for this year’s ‘Celebration of Love’ mega concert. They said it is always good to learn from artists who have been out there and are internationally known. The Bahamian singers all got the chance to share the stage with Grammy Award-winning Fantasia and best-selling R&B artists Ginuwine and Johnny Gill. Performing on the same stage as Ginuwine, Julien Believe said was a privilege.

“You cannot buy things like this. The opportunity that we have here, people around the world wish that they can have that, so for me I am grateful for the support that we have been getting. I am thankful for the promoters to allow us to share the stage with these artists. I think this is going to look good on our resum�s and it is going to bring us closer to our goals. The camaraderie between us three is a family affair,” said Julien. A lot of the ladies that attended the concert may not soon forget his cover performance for John Legend’s “All of Me”.

“This year, I want to approach things a little differently, and instead of just releasing one song, I want to turn it up a notch. The Bahamian people are used to the uptempo stuff from me and I wanted to show the other side of me. I want to show where my roots came from, and that is R&B. I have a song called ‘242 Forward’ and another song called ‘Love You Forever’,” the singer said. Julien said he was delighted to be seen by the international members of the audience at the concert, “as you never know what can come out of it in the future”. FourEver 1 performed their new single “Lost And Found”, and while Angelique sang a little bit of everything, patrons were excited to hear her new single, “I’m Ready”. Johnny Gill’s performance was energetic and full of life. And while he has not thought about doing any future music projects in the Bahamas, the singer said he is definitely open to the idea. “We were talking about the last time that I visited here and I am sitting here thinking why has it been so long. I hope this definitely won’t be the last time and love will be here again. I love this place and it is a great thing to have to go to work and vacation at the same time,” he said.