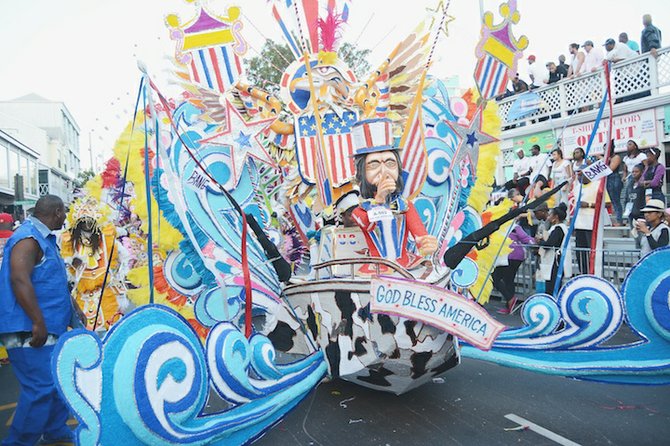 WITH a vibrant America themed performance, the Valley Boys have captured the title as the winners of the 2014 New Year’s Day Junkanoo Parade.

The A category group triumphed over the Shell Saxon Superstars who took second position with less than a three-point margin.

The Valley Boys, Hanna told scores of Junkanoo group supporters, finished with 89.21 points, the Saxons had one point deducted to end the parade with 86.46 points, Roots placed third with 81.66 points and One Family had 10 points deducted during scoring. They received 74.71 points.

Two groups, the Music Makers and the Prodigal Sons were disqualified because of an ineligibility rule, Hanna said.

Jamal Brice, an off the shoulder dancer, said the group received strict orders from its leader, who is experiencing health issues, to dominate the parade. And group members did just that.

“It’s not a surprise,” Brice said, “The Valley planned these two parades out and we executed. In the end and our leader is down now, he gave us strict orders. We went and carried them out and we became victorious. It’s been a hard year for the Valley, but we came together and we pulled it off. The only thing we can say is it is all about running streaks now. ”

“We went out there this morning and we left everything on Bay Street. Our first lap was one of the best first laps that we have had in a long time. We gave it everything. Our energy levels were through the ceiling. Our second lap was the icing on the cake. We knew that music was ours. We are the big boys.”

In the B category, Colours clenched the title with 85.60 points. Taking second, third and fourth positions were the Fancy Dancers, Conquerors for Christ and Red Land Soldiers respectively.

Congratulations Valley Boys (& Beautiful Ladies) on your second win. Not to sound critical of the Tribune being I support free speech but had the Christmas and New Year's Junkanoo Organizing Committees read the Tribune's dire warning Christmas Message editorial, calling for Bahamalanders to cancel Christmas, there might not have been any Junkanoo floats, bands, masqueraders or rushers to our Bahamalander rhythm. Bay Street could have been plastered with Boogeyman's. Twas the night before Christmas when the Tribune's editorial attempted to play the role of the Grinch by hoarding all the Christmas presents, but only for the little children up on the Eastern Road. Twas the night when the Grinch's at Shirley and Deveaux wanted to snatch way Christmas from Bahamalanders not so rich little children. Some'tin tells me that there were not many children up on the Eastern Road this year, whose parents didn’t even have a turkey bone to put on their Christmas Day plates. There certainly were lots of well-lighted Christmas Trees, nor did their children's beloved fat man in da red suit instruct he reindeer not to stop at the homes of the Winton Heights children. At Winton Heights it was OK to put aside their crime fears, if only long enough to celebrate the Spirit of Christmas, but not for all the rest of Bahamalands families. After all, why should any of Bahamalands other little children be allowed to deny the criminal thugs, from stealing away their Christmas Spirit. Mean is mean, no matter how journalistic you dress the sucker up.

we china like valley boys very much!!! china live for bahamas!