Mitchell Under Fire In Spy Row 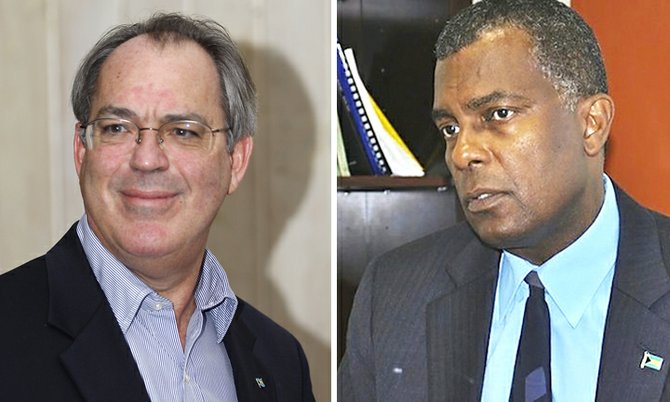 Mr Symonette, who served as minister of foreign affairs and immigration in the last Ingraham administration, spoke with The Tribune a day after Mr Mitchell said he had nothing new to report on the spying claims, seven weeks after they became public.

Mr Symonette said it was “a shame” that the Christie administration has not been successful in gleaning answers from the US on the alleged infringement of Bahamians’ privacy.

“I absolutely feel that he (Mr Mitchell) was grandstanding,” Mr Symonette said. “He was in the press beating up his gums about the issue in the days that followed the report going public. He promised Bahamians that he would get the answer and we see today, there still is no answer.

“He gets on a plane to meet with colleagues for OAS (Organisation of American States meeting) rather than flying to Washington. If you have an issue with America go to Washington and deal with the matter. But it is just a shame that all this time has passed and still, he can’t tell us anything.”

On Sunday Mr Mitchell told this newspaper that he had not received a full account on the spying claims from the US but had planned to have lunch with John Dinkleman, US Chargé d’affaires yesterday. He suggested that the issue could be discussed at that time.

When contacted for comment yesterday, Mr Mitchell said despite a meeting with the American diplomat, the Bahamas government still did not have an update on the spying allegations.

“They are still collecting information,” Mr Mitchell said. “They have no instructions (from the US government) and they are to provide an answer as soon as they get instructions.”

On May 19, The Intercept reported from documents obtained by whistle-blower Edward Snowden which showed that an NSA programme, SOMALGET was “secretly intercepting recording and archiving” every cell phone conversation in the Bahamas and that those recordings were kept for a month.

On June 10, Mr Mitchell told reporters that he would present a full report in Parliament on the spying claims, as the Bahamas government had asked US officials to give an account on whether the alleged spying was true. If found to be true, he said the government would insist on finding out if the recordings were taken legally or illegally.

Mr Mitchell the next day announced in the House of Assembly that John Kerry, the United States’ secretary of state, had stepped in to oversee investigations and that a report was promised. That report was expected to be handed over to the Christie administration some time during the following week, but to date the government has not received it.

Mr Mitchell has said he has no concerns with America’s lack of response because the Bahamas government was doing its own investigations.

Uncle Sam knows exactly what is going on at his doorstep. Anyone who thinks otherwise is a fool. They learned their lesson with Cuba.

Freddy Boy just doesn't understand that Brent Symonette (like Ryan Pinder) is fully in the know when it comes to most matters impacting the relationship between the U.S. and the Bahamas. Both Brent and Ryan are very well briefed on U.S. foreign policy matters involving the Bahamas; much more so than poor Freddy Boy could ever hope to be given what the U.S. government knows about his bent view of the U.S. among many other things. A senior U.S. Dept of State official recently said at a cocktail function attended by several very influential residents of Lyford Cay that the U.S. regards Mitchell to be nothing more than a publicity seeking bag of hot air blinded by a misguided and flawed sense of his own intellect and importance. I think most Bahamians could not agree more with the U.S Government's view of Freddy Boy!

I'm tired of this "spying investigation" nonsense. It's time to realize that the Americans will never confess to spying on us, (Which country admits to spying?) and I don't blame them. However, the bigger question is what are we, as Bahamians, doing to stop them from spying on us even more?

Funny thing is the Bahamas doesn't spy on anyone except Bahamians, and only because we post everything on Facebook! Still working on sip sip.

How about if our government does not grant The Bahamian people a true Freedom of Information act, we hire the CIA to tell us what is going on. These supposed leaders are running amok and have no respect for the common man, we are going to have to reign them in somehow, someway, one day! I really do not want to have to immigrate to the U.S. or elsewhere.

Providing it is true and I do not know if it is .What the senior US official had to say at the cocktail party at Lyford Cay. it is not all that bad. We as a people have been called worse. Try Monkey. But we rise above it all. .

(Maybe it's me and my appreciation for order, logic and rationale...... ) A. This has nothing to do with "we as a people", it's about Fred Mitchell "as a person". B. Have you ever worked for anyone who was more concerned about their good than the good of the team? If you did, did it ever cross your mind, gee I hope that person "rises" further? C. As to whether the incident actually happened, doesn't matter, the sentiment is a repeat of a previously leaked embassy communication during the last PLP administration. This is how everyone (probably even members of his own party), views him. They must have rolled on the floor laughing when he sent that diplomatic note on Dr Minnis.

It is no such a great idea to encourage Mr Fred Michell to spoil the relationship with the USA . On has to come to realize that there is so much at stake here , than to worry about some of these things that wont harm the honest , dignified group of people. One has to wonder why is a few of us so concern about what will be discovered as a result of some of these conversations. I know for sure , than as a result of the spy conversation , a few people will stop in there tracks to think...........maybe i should be doing this lol