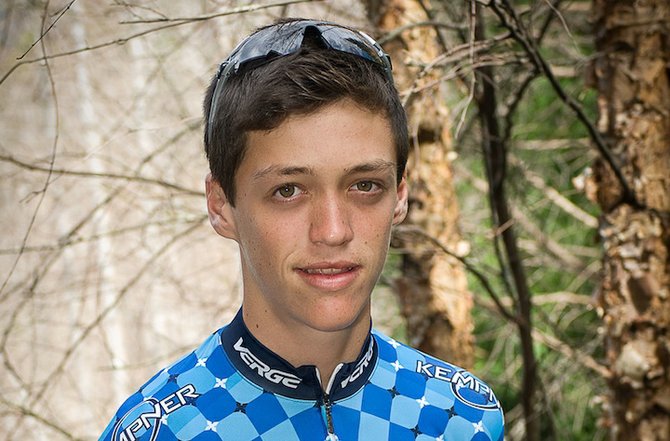 TEENAGER Liam Holowesko, the youngest member of the elite fleet, turned out to be the giant killer as he rode to the fastest time to win the Bahamas Cycling Federation’s 2014 National Time Trials at the Caves on Independence Day.

Holowesko, a 13-year-old who has only been competing on the local scene for two years, clocked 54 minutes and 48 seconds to post the winning time in the 40 kilometre race held two days before the gruelling 74-mile National Road Race on Sunday.

The race, which allowed a one-minute gap in between each competitor, featured four of the cyclists who were named by the Bahamas Olympic Committee on Tuesday as the representatives for the Bahamas at the 20th Commonwealth Games in Glasgow, Scotland, July 23 to August 3.

The Lyford Cay student, who undoubtedly is too young to compete in the international meet, said his performance was just an indication of what to expect from him in the future.

“It was really hot, so I tried to get into a rhythm at the start. I swifted into by biggest gear and just tried to crank it out,” said Holowesko on how he managed to produce his time. “I just really disconnected my brain from my entire body. I really didn’t think about anything. I just wanted to go as fast as possible to the end.”

On being one of the youngest winners of the national title, Holowesko said he’s taking it in stride because he doesn’t want to get burnt out before he reaches the age of 18 when he can make a decision on whether or not he will be prepared to try his hand on the professional circuit.

Holowesko, who competes for a team in the United States, said it’s a big accomplishment for him and he was happy with the assistance he got from his cousin, Bruce Hall, in preparing for the race.

Hall, 18, said he came into the race just trying to go as hard as he could and make it through in the top five. He admitted that working out with his younger cousin for the past two years has really made the difference, considering how well he has been performing.

“I went out pretty hard at the start, maybe a little too hard, but it paid off,” said Hall, who will be heading off to college in August. “I left in fifth with a minute interval in the distance between the cyclists and I could see those who were ahead of me, so I slowly worked my way up picking them off and they gave me a bit of encouragement and that helped me to push really hard.”

Two females competed with Juliana Passos taking the tape in 29:03. Shantell Brown was the only other competitor in 31:31. “I didn’t have time to think. It went pretty fast, so I didn’t have much time to think,” said Passos, a Brazilian working here for five years when she began competing in the Ride for Hope in 2010.

“It was a fantastic race. The Bahama Boulevard is great, the JFK Drive is also nice for the cyclists and the cars are now learning how to respect the cyclists on the road, which helps a lot.”

“It was okay. I rode hard, kept a good pace, so I was glad that I won,” said Roberts, a 14-year-old who will be leaving SC McPherson to attend CV Bethel in September. “The competition was fair, but it was not as hard as I thought it would be. I’m glad that I won it. It feels good.”

On Sunday, the federation will hold the national road race, starting and finishing in front of the caves. The elite cyclists will cover 74 miles, while the masters and senior II will compete in a 50-mile race. The open women and the juniors will race for 40 miles and the novices will be limited to just 30 miles.