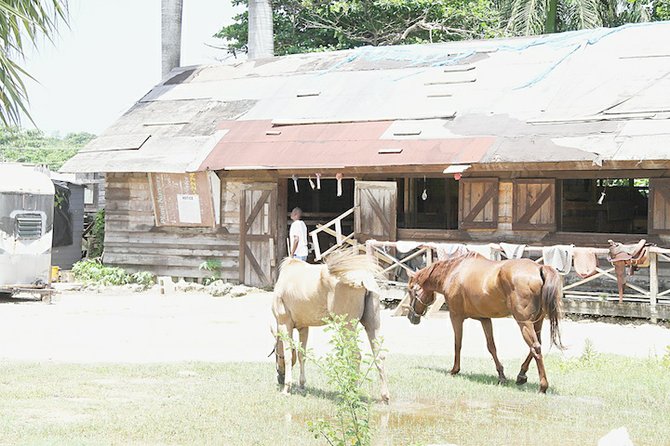 Happy Trails owner Sue Smith told The Tribune that she has been trying to reclaim horses leased by a third party to the Bahamas Association for Social Health for nearly five years.

She has alleged that the animals have been slowly dying due to improper care, and that their condition has rapidly worsened this year. However, her claims have not yet been supported by officials.

BASH president Terry Miller yesterday rejected claims of animal cruelty and challenged Mrs Smith to honour an earlier court order that mandated payment for the period that the horses were in his care.

Mr Miller charged that the horses played a critical therapeutic role in his rehabilitation programme and exposed inner-city children to the experience of horseback riding – a luxury he said they would not otherwise have been able to afford.

“(Mrs Smith) is missing everything in her quest to win,” he said, “I think that’s really what she’s trying to do to win, and I don’t know what it is she will win in the end, but I guess she thinks she will win something.

In an interview with The Tribune, Mrs Smith admitted that she was aware of the request for payment in order to reclaim the animals, but she refused.

Mrs Smith said: “I’m calling for the return of the horses to their legal owners, that is Camperdown, Marlon Johnson and myself. I have three and the others have one each. This has been going on for four and a half years, we sent all the paperwork to (Police Commissioner) Greenslade.

“I don’t even know the man, it was leased to Mr Johnson for his little riding school at Earth Village,” she added.

According to both parties, an agreement was made for several horses to be leased to Earth Village, an eco-tourism component of BASH. Since then, Mr Johnson severed ties with the non-profit organisation, but the animals remained at the facility.

Mr Miller said two horses were reclaimed by Mrs Smith. “She has come here, she got two of the horses,” he said, “we stepped back on that.

“I have said to her from the very beginning if she is prepared to pay us for taking care of the horses, she can have them, that’s it. She can come and have them, but this whole attitude, it’s almost elitist, and I’m being gentle with that word.

“It’s probably more than that but this attitude that horses maybe shouldn’t be in this part of town.”

In response to claims that he was not trained to care for the animals, Mr Miller said: “What do you need, a degree to take care of an animal? You work around people who take care of them, you do the same thing that they did.

“It’s a matter of feeding them certain feeds at a certain time, washing them so many times a week, it’s a matter of putting their shoes when they need it, of having their worming.

“We have vets from the Department of Agriculture who come down and donate their time.”

The Tribune understands that a private vet has been working with BASH over health concerns under the direction of the Bahamas Humane Society (BHS). When contacted earlier this month, a BHS representative referred all inquiries to the Department of Agriculture.

Officials within the Department said yesterday that a statement on the matter would be forthcoming.

Ms Smith said: “It costs $1,000 per month to keep a horse in the Bahamas. If people don’t have this wherewithal ... look at carriage drivers, the problem is they can’t make enough to keep up with the horses.

“The logical conclusion is what is happening now, this was inevitable. You can only do horses the right way, there is only one way.”

A person close to the matter, who wished to remain anonymous, said: “Activists mean well, but sometimes get in the way. Donating bales of hay is not the point at all, they’ve just prolonged this. We told them don’t give him (Miller) any food, and this is able to come to head much quicker. By giving them food it’s just dragging it on and (horses) dying slowly.”

Mr Miller told The Tribune that BASH suffered major financial setback last year when it lost a significant maintenance contract with the Bridge Authority. The contract represented 60 per cent of the non-profit organisation’s income, but Mr Miller attributed recent health difficulties to a deviation from feeding schedules during his two-week absence for a training seminar.

Mr Miller said: “We lost the contract in November after 12 years, and went through a hard period, the horses are doing much better now. But for people to discourage others from helping us, a non-profit organisation?

“Things like this speak to insensitivity on the part of people in our communities, our leaders, politicians, because it’s not just business. Here is an organisation that is supporting the social development of this country, that is looking at maintaining young and older men who, if they weren’t in BASH, could be on the streets doing negative things.”

He added: “We’ve turned this whole thing around, some people have donated. BASH depends on donations, and these are people here that depend on donations for our survival. We still depend on the community’s support to donate to us.

“These horses are more than just five horses walking around – they are our pets. We all love these horses, it’s a relationship. It’s therapy, you can feel it just looking at them, watching horses in an environment like this moving about.

Mrs Smith explained that attempts to reclaim the horses have been unsuccessful, despite documentation that proves she is the rightful owner. The Tribune did not see her documents.

She said she believed efforts were thwarted due to Mr Miller’s political connections, adding that he was a brother of Tall Pines MP Leslie Miller.

“We have no resources in the country against this, the police couldn’t do anything or the courts, the Bahamas Humane Society has no powers of seizure.

There’s five left there now, and they’re near death. We expected all of this to happen much sooner. We knew it would come to this because he doesn’t have any knowledge about horses or how to feed them. They’re dying and there’s one there very old that I don’t think we’ll be able to save.”

She added: “If he can’t feed them till now, how is he going to be able to feed them?”

Mr Miller rejected claims that the horses were mortally ill and the assertion that his organisation was protected as a result of political affiliation. He pointed to the spirited nature of the animals and positive temperament, which he said did not indicate mistreatment.

Don't know the specifics- but if this woman is in fact the owner, then technically, by law , she should be able to get the horses back , correct? Unless there is more to the story than what is being told...

Going by this article alone, we can see why the government needs to enact whatever animal protection act is on the books so that the BHS and Bahamian police can work together to protect these animals and so many others around the country. Very sad case if the horses are indeed suffering-- if Mr. Miller's organization cannot afford to take care of the horses (and there are definitely large expenses involved with care of this type of animal), then something else must be done. but when there are no consequences to your actions , what do we expect? The government doesn't care about its own people much less the animals of this country, so I am not surprised.

By the way, Mr. Miller should know that while many animals do exhibit outward signs of distress/ abuse, not all neglected animals show this on the outside. Just because the animals appear to have a "positive temperament", does not prove they have been well taken care of. And if he cares so much about the good they do therapy-wise, he should be keen on taking care of his investment to the best of his ability. If I become ill, as unfortunate as it may be, alternative arrangements must be made in order for my organization to keep going--if that includes feeding animals on my property- I, or someone else in command, will see that it is done.

I'm an animal lover so this story speaks to me....But this story (if what is written is confirmed - since tribune says it has not seen the lady's ownership docs, etc) is no different to all the other injustices that go on in this town. So many of the horrific stories we see in the news today could be easily avoided if we just enforced the law in this country. It comes back to the story of Bahamians in the US: when we go to Miami, the first thing we do is buckle our seat belts and follow the rules of the road and otherwise. We do this because we KNOW there will be CONSEQUENCES to our actions if we disobey the law.

Bahamians have so much potential to be and do more, but if we cannot even enforce the most basic of laws, how will we ever rise above? Whatever happened to the story about the lady who's front door was busted down when plain-clothes police invaded her home while she was naked, and did not identify themselves as officers of the law? What about all the detention center reports of abuse, threats, etc? What about Ishmael Lightbourne and all the other political scandals that have gone on ? The "unsolved" murders and rapes that get pushed under the rug? Between a lack of enforcement and a lack of basic education, we are being robbed blind as a nation and it is so sad. Begin enforcing the laws on the books so people can be more aware of their actions and act accordingly....otherwise , we continue on this slippery slope.

Seems strange, shouldn't it be the other way around? If you're given use of someone's horse you pay them something equivalent to a "lease"? Good horses are expensive to purchase, maybe the "loan" versus the cost of upkeep comes out a wash, after all the owner did not beg this gentleman to take the horses, he took them because the horses were of use to him. Funny enough he mentions that he's earning an income off the horses...

Having spent quite a bit of time in the horse industry and also therapy centers in another country, I've NEVER heard of an owner having to PAY people that are using the owners horses for a business/charity etc! ABSURD! Absolutely A** backwards! IF anything, BASH should be leasing the horses from the owner! But as usual, things work backwards here. We can expect BASH will drag this out (already been 5 yrs) and the horses will be neglected more, and then a law suit will be pending and then, he'll give them back...all with a puzzled look on his face as to why this all happened.....